Check out all of Melissa’s playlists on Spotify 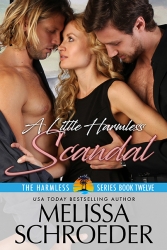 Scandal was a return back to my roots with my bestselling series, Harmless. It had been two years since I had written in the series, although I had written many books in Task Force Hawaii, which is a spinoff.

I returned to two characters readers had loved since A Little Harmless Fascination, Mick and Adam. The bisexual couple had been together for awhile before this book came to be, but they had always played with women. When they meet their new neighbor Serenity, they can’t but help to think she might be the one for both of them. Their soundtrack was eclectic and a bit sweet in my opinion. It set the tone of the story since all three characters have very distinct characteristics, and the love story is sweet–but also hot!

Hold On by Micheal Bublé was the love song for our heroes. They have a great backstory, being friends before finally falling in love.  There is a love scene between Adam and Serenity in which I listened to Kiss Me by Ed Sheeran. For our trio, Give Me Love, also by Sheeran, and When I was Your Man by Bruno Mars were their love songs. 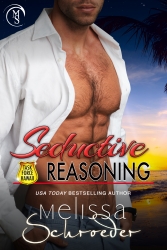 Emma was such an amazing character and completely different than my other heroines. She didn’t see herself that way and that is why the song Monster by Eminem featuring Rihanna fit her so well. She knew her character faults but she had learned to live with them and thrive.

For Seductive Reasoning, I started using various instrumentals from LOST. No Place Like Home was the love song for Del and Emma. I did not think about it until I was finished writing, but the title fits Emma especially because she had been looking for a home and an Ohana for a long time.

Goodnight Saigon by Billy Joel inspired the opening scenes where Madison is rescued.

Dante and Madison didn’t seem like they would fall for each other, but when they did, it was complete and absolute. It’s why All of Me by John Legend fit for their love song.

Lots of Hot Stuff You Can Order!

In the world of By Blood there are Born and Made Vampires, and Carriers. 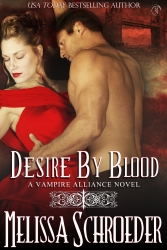 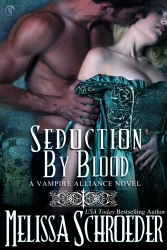 Inquisition – Many Vampires were killed, but the worst of it was the Carriers. Because of the Church’s actions, the Quad council became even more secretive.

Vlad the Impaler – Born Vamp who made his army.

💗He came for revenge, but he found love.💗 R

Reader Interests in all of Melissa's Books