A Santini in Love - Melissa Schroeder

Book 6 in the Santinis Series 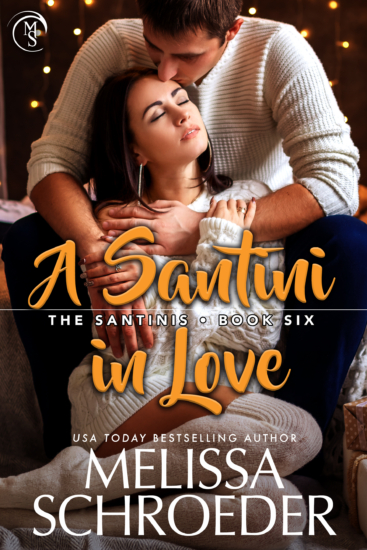 The moment I met my sister’s best friend Madison Baker, we immediately take a dislike to each other. She always thinks she’s right, and worse, she usually is. We spend our four years at the academy torturing each other.

Years later, she’s out of the Marines thanks to a roadside bomb. If you think that means she’s fragile, you would be wrong. She’s stronger than anyone I know, and we still drive each other crazy, and when one of our arguments ends up in a blazing hot kiss, and then we can’t seem to keep our hands off each other.

When she tells me she’s seen a murder, and no one else believes her, I stand up for her, because this is Madison–she’s always right. Together, we sift through the meager evidence, trying to unearth the secrets someone is trying to hide. Neither one of us expected that it would draw us closer—or that a killer is hell bent on making sure those secrets stay buried.

Book 6 in the Santinis Series 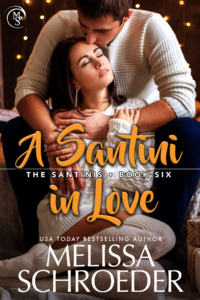 Madison Baker didn’t know what day it was or where she was, but she knew one thing.

Pain radiated through her entire body. It was if someone had beaten every centimeter of her flesh. She tried to open her eyes—nothing. Hell, she wasn’t sure she was even breathing.

That thought had her struggling, pushing her hand through something heavy. Dirt? She was buried? Panic surged as she tried to gulp in air and found nothing. Weight settled on her chest.  It was getting so dark, so cold…she felt a bit of her soul drift away.

Gonna give up, Madison?

Her father’s voice echoed mind. How many times did she hear him say that in her lifetime? Thousands.

If you weren’t being a coward right now, I wouldn’t have to scream at you.

She used what was left of her energy to move her hand. It might have been only inches, but it felt like miles. A renewed sense of survival had her pushing harder, up through the debris. Up, up, then she felt it. Cool air washed over her fingers.

In the next few seconds—even if it felt like hours—she pushed harder and got her hand up through.

“Over here! I found one over here!”

As feet pounded toward her, she kept pushing until she felt a hand grab hers. It tugged and she held on with all her strength. The voice kept talking to her, telling her they would get her out of there. Then, she was free, air rushing over her face and she tried to open her eyes. Bright light burned her corneas and she shut them.

“That’s okay, Lt Baker, we have you,” her savior said. The whop, whop, whop of the approaching copters almost drowned him out.

“Who…” she broke off not sure if he could even hear her. Her voice sounded and felt like gravel.

She felt him lean closer as people started to dig around her. “What?”

She licked her lips and tasted blood and dirt. “Who are you?”

“I’m Sgt Gee Santini of the US Air Force, and we’re here to take you home, Ma’am.”

“Thank you,” was all she could say. Then, her world faded to black again.