Part of the Santinis Series 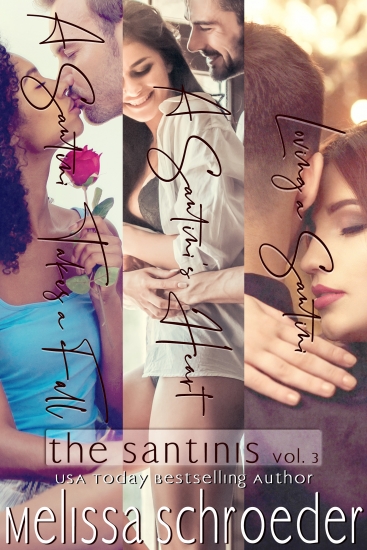 Get three Santini stories for one low price.

A man avoiding his destiny.

Anthony Santini is happy with life. The former Marine is now working a dream job for NCIS in a dream location: Hawaii. He’s watched his cousins and now his siblings fall into the Santini Curse and that is not for him. Not yet. He’s happy to play the field and enjoy life. It still doesn’t stop his cousin’s wife from trying to fix him up.

Lalani Hawkins has had enough heartache to last a lifetime. The professional dancer isn’t looking for love and she definitely doesn’t need a man like Santini in her life. After the worst blind date in history, she thinks she’ll never see him again.

For two people who want to avoid each other, Lalani and Anthony can’t seem to achieve that. Each time they meet, Lalani falls a little more under the Santini spell, and for Anthony, he is drawn to the vivacious dancer. But when Anthony senses her hesitation to commit, he starts to formulate a plan. Because when a Santini man decides he’s found his mate, there is no stopping him.

Carlos Santini has seen the worst of war first hand. After leaving the Marines, he decided to open a therapy ranch. If he can’t fight anymore, he wants to help those who have served and who are still serving. Everything is fantastic, but for one little issue, his partner, Tia Mendoza. The woman is bossy, sarcastic, and so hot he can barely keep his thoughts straight around her.

Tia loves the work she does with Carlos. She thrives helping other veterans like her brother. Of course, working for a man like Carlos isn’t easy. He has a hot temper and he is so sexy when he loses it. She can’t help but test him, until the day she pushes him too far.

Carlos knows from that first kiss that Tia is the woman for him. But, before they can have that Santini HEA, they find the ranch they both love in danger from some very bad men. As the threats grow deadly, Carlos realizes that before he can claim his woman, he will have to do everything in his power to save not only the ranch they both love, but also Tia’s life.

A Marine searching for serenity.

Fernando “Nando” Santini has a lot to live up to being the youngest in a family of Marines. He has only ever wanted to be a Marine, until his last deployment.  Since he returned, he’s suffered from nightmares and sleeplessness that has him ready to try anything. When his cousin’s wife suggests massage therapy, he jumps at the chance to try something new.

A woman who lives to heal others.

Sunshine Foster has always marched to the beat of her own drum.  Raised by a single mother, she’s had her share of hardship and pain. She became a massage therapist and reiki master to help people heal, including quite a few military personnel suffering from PTSD.  Right from the start, she knows Nando is different from her other clients. She can’t seem to keep a professional distance she’s never had a problem with before him.

Almost immediately, Nando starts to realize that she is the woman for him. Sunshine has dealt with clients who fall in love with her before, but her feelings for Nando are far from normal. One kiss has her falling for him and soon, they are involved in a red hot affair. But Sunshine is keeping a big secret from Nando, one that could destroy their budding relationship. When it is revealed, he will just have to prove to her that once a Santini falls in love, there’s no changing his mind…or his heart.

Part of the Santinis Series 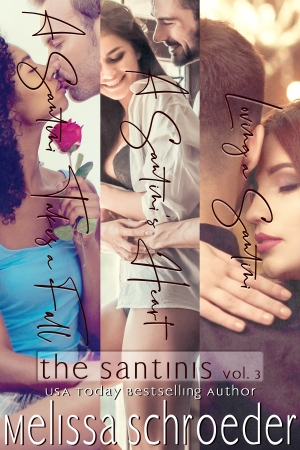