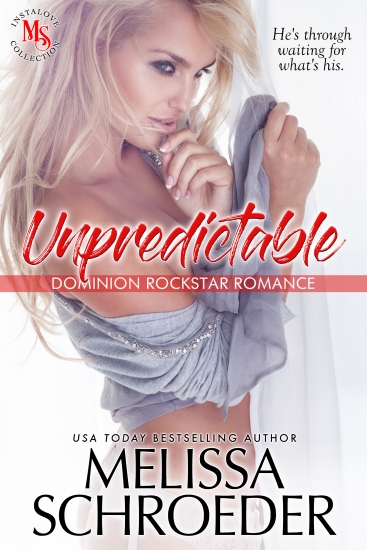 I’m through waiting for the woman I love.  She’s always been a little different, marching to the tune of her own drum. She was only sixteen when I first met her and fell in love. She was too young for me…too innocent.

Six years I’ve waited, keeping my feelings to myself. But Livvie Jones knows just how to push my buttons and this time, she might have just unleashed the beast. When the dust settles, one thing is for certain: nothing will ever be the same.

Author Note: This is an instalove, quick love story featuring a keyboard player who is sick of being treated like she’s untouchable, a bass player on the edge, and a night neither of them will forget. 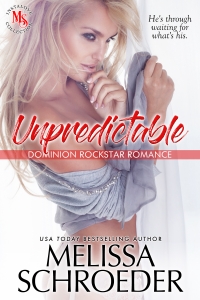 I drop my earring for the second time and mumble a curse. I don’t say it out loud because I was raised by a woman who doesn’t believe in cussing. Actually, that’s just for women. Women should never swear, smoke, have tattoos, and they definitely don’t tour with three men as part of a rock band.

I push those thoughts aside. I haven’t talked to mother in over three years, and that’s not going to change. That’s why I value the entire Patton family. I tour with the three brothers, Gareth, Jax, and Knox, and their mother was my voice coach. Their father always includes me when he sends out his “dad” joke texts. I’m one of them. That’s why my obsession with Jax is embarrassing and stupid.

Grabbing up my earring—one of the studs the guys bought me at the end of our last tour—and slip it through the hole in my ear. I step back from the mirror and take in my appearance. I’ve decided to go upscale casual for tonight’s outing, wearing a simple red t-shirt that brings out my brown eyes. The worn jeans hug my hips and are almost as comfortable as yoga pants. I grab a bunch of bangles slipping them on, then I head into my bedroom.

With a break for about a week, Jax, Knox, and I are venturing into Denver for the night. I can’t remember the last night we did this outside of our hometown of Charlottesville, Virginia. Probably never. Before this year, our tours have always been a rush, too long, with barely anytime to catch our breath. But now, we have Pippa March handling everything, and she made sure we had a break in the middle of the tour. She and Gareth found this fantastic house to rent for the week. We all have our own rooms with ensuite bathrooms. It’s a far cry from the two-bedroom house that had AC, but it also had my mother who thought using AC in 100-degree weather was being soft.

I roll my eyes and again push those thoughts aside. I don’t know why I’ve been thinking about her today. Maybe because I finally have a moment to think, and she keeps creeping back in. I have no time for her or her insanity. I want to have fun tonight. I grab up my small cross-body purse that can fit the essentials—my phone and lipstick—then hurry downstairs. When I reach the bottom of the stairs, I find—no one. Ugh, those boys take longer to get themselves ready for a night out than I do. Not that Jax needs the time. Just thinking his name makes me think about his grey eyes and the way they watch me.

I sigh off a shiver and remind myself he sees me as a little sister. They have their own sister, a couple years younger than I am, but I know all three of the guys see me that way. Gareth and Knox’s feelings don’t bother me. It’s Jax, with his soulful eyes and naughty smiles. I want him to see me as something more than the sixteen-year-old his mother introduced to him six years ago.

“Oh, hey, Livvie,” Abby Ford, our personal chef for the week, says startling me. I turn to her with a smile.

“Hey, Abby. Sure, you won’t change your mind and come with us?”

Knox had invited her out for night over breakfast, and she had declined. It was an odd request from Knox who likes to get the lay of the land—his exact words–when it comes to women.

“Like I said, I have to be up early. I’m really not into partying.” The petite dark-haired beauty drawls out every word in a cute Southern accent.

“Me either. I just want a night out.”

Truth is, I thought I would have been able to get out more on tour. You hear all the stories about crazy parties. We have done none of that. Truth is, we are usually too tired, and Gareth—the oldest and drummer of the group—doesn’t like to either. In fact, he hates people for the most part. Also, the brothers don’t want to drink a lot on tour either. We’re the unrockingest band around.

“It must be hard touring with three guys.”

I roll my eyes. “Yeah, they all think of me as their little sister, so they feel the need to keep any and all men away from me.”

She chuckles. “I’m an only child, so I don’t know about that.”

“Me too. I’m not that close to my blood relatives, but the guys—and now Pippa—are my new family.”

“That’s nice,” she says, a thread of yearning in her tone.

Before I can respond, I hear a whistle from behind me. I glance over my shoulder and see both Jax and Knox are finally ready. Of course, they look the part of rock stars—t-shirts and jeans. From the smile on Knox’s face, he’s the one who whistled. Jax, well, he’s glowering at me, and I have no idea why. He’s wearing a gray t-shirt that molds to his sculpted pecs and those jeans. They aren’t exactly tight, but they cling to his lean hips. I’ll be honest, it makes me feel all warm inside. My entire body is lit up like the Fourth of July, and my nipples, well, maybe I shouldn’t have worn this tight shirt.

I cross my arms over my breasts, but it just plumps them up over the neckline. I’m not overly endowed. The incredible thing is that Jax’s gaze drops to it for a split second and then moves away. It might have been my imagination, but either way, I feel the heat creep up from my cleavage to my face.

“Finally. You two take forever,” I say, trying to ignore the need now coursing through me. I’ve been in love with Jax forever, and he has never shown any interest in me. That is until he looked at my cleavage right now.

“Not fair, you’re a natural beauty,” Knox says. This is not flirting. Not really. He’s just this way with all women.

“Don’t you think you’ll be cold?” Jax says. I look at him now, and he’s back to being angry. My heart gallops, and my stomach muscles clench. The tension drops lower, and I know if I move, it’ll be damp between my legs. Oh, God, this is bad.

“We’re going to a club. Or possible clubs. It will be hot AF in there,” Knox says, shaking his head. Before Jax can argue with his youngest brother, Knox’s phone dings. “Our rideshare is here. Last chance, Abby,” he says with a smile.

“Thanks, but no thanks. Have fun,” Abby says, walking back into the kitchen.

“What the hell is that all about?” he asks.

I pat him on the cheek. “Don’t worry, baby boy, we’ll find you a woman tonight.”

And that’s what I need to do for myself. I need to find myself a man for the evening and rid myself of this stupid virginity. Maybe if I accomplish that, I’ll be able to shake this insane need I have for Jax.