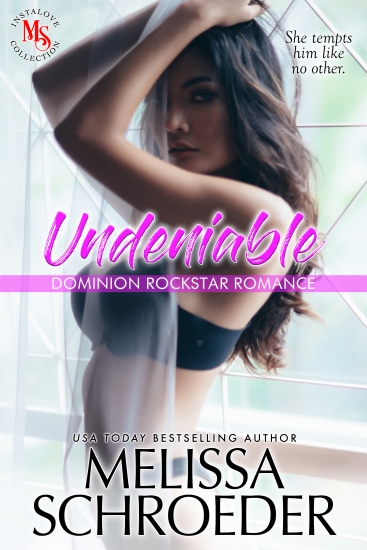 From the first moment I met her, I’ve wanted Pippa March. She’s sexy, smart, and funny. But she works for my band, managing us through our biggest tour yet, so she’s off limits.

Until one night, and one kiss. Once she gives herself to me, I know will never let her go. Unfortunately Pippa comes with baggage, namely her absent rockstar father. I have one night to convince her that I want her forever, and I don’t intend to fail.

Author Note: This is an instaromance with a silent bear of an Alpha hero, a spunky British heroine, lots of feels, a happily ever after with no cheating and no cliffhangers.

This book was originally released under the name of Maya Reed. 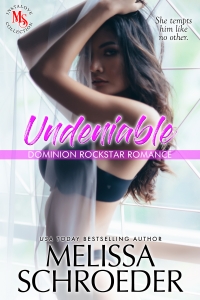 “I don’t care who you want to hire. Just pick someone and be done with it,” I growl as I stare at my two brothers. They showed up about twenty minutes ago and interrupted my work.

“We need you to meet the new manager, Gareth,” Jax, our middle brother, says.

I settle my hands on my hips and stare at him. Most people would go running, but neither of my brothers bats an eye. I sigh.

“I have songs to write.”

Our youngest brother is the one to speak up next. “Yeah, we know that, but we need a manager,” Knox says.

The three of us, along with our keyboardist and backup singer Livvie, make up the band Dominion. The last couple of years have been insane since we won our first Grammy. We fired our last manager when I almost ended up in the hospital because of dehydration and exhaustion. After that, the record label backed off and let us have nine months to regroup. This was supposed to be my time. But here they are, invading my cabin, bugging me.

“I need to write, and if I don’t get some peace and quiet, I can’t do that. If I can’t write anything, we don’t make money, guys.”

“Listen, all we need is her approval,” Jax says.

I blink. “Excuse me? You think I’m going to wait for the approval of some asshole while you fuck up my solitude?”

Okay, so I know I sound kind of like a jerk, but the truth is I need this downtime. The tour, all the people, it’s a lot for me to handle. This time off gives me time to get into my writing. I don’t know what I would do without it. Maybe go insane. Yeah, good chance of that.

“Rule number one, gentleman, is never mess with the writing genius,” a very British female voice says from the doorway.

I turn my angry gaze her way and immediately lose my ability to do anything but stare. Standing there is the most gorgeous woman I have ever seen. She’s young, definitely in her early twenties, with eyes the color of toffee, a cute button nose, and full pink lips. I let my gaze travel down her body, and my own body reacts. It’s hard not to. The yellow sweater is a little tight across her fantastic rack and adds a glow to her. My palms itch with the need to touch, to tease her until her nipples are hard. Her tiny waist flares out to a pair of shapely hips—the kind a man can grab hold of while he’s thrusting in and out. That one thought has my cock hardening, pressing painfully against my zipper. Jesus, she’s wearing a miniskirt and thigh-high boots. I raise my gaze back up to her face. Her gaze never wavers. She definitely has some brass balls.

“Gareth, meet Pippa March.” This comes from Jax, but I barely pay attention.

How can I when my entire body is screaming at me to take…conquer. My fingers itch to explore her sweet flesh, then replacing them with my mouth. I stand there, unable to move closer. Mainly because I’m afraid I’ll pick her up and refuse to let her leave. Then I’ll become the beast everyone accuses me of being, living high up on my mountain with the beauty I’m holding captive.

“Nice to meet you, Gareth.”

I don’t say anything right off the bat, still trying to get my entire body under control. My dick is not amused.

Knox mutters under his breath.

“That’s true, but I’ve been in and around bands my entire life.”

I don’t know what to say to that. Jenkins is a big name in the early nineties emo rock. As the frontman for Purple Haze, he’s a legend in the business. I’ve also heard he’s an asshole.

“Did your father suggest you for the job?”

The moment I say the words, I realize it was definitely the wrong thing to say to her. Her soft brown eyes turn hard, and her brow furrows.

“Absolutely not. I don’t need my father around. Ever. But one thing I did learn was life on the road and how to manage a band. I definitely understand how to handle the temperament of a writing genius.” She looks at my brothers, then back to me. “And his minions.”

Pippa returns my smile. My breath gets tangled in my throat. She’s a gorgeous woman, but when she smiles, she sparkles like some kind of damned fairy. I wouldn’t be surprised to find wings hidden under her clothes.

“Fuck you,” Knox says, but I ignore him, as does Pippa.

“You all worked out a price?”

She nods. “I can handle it if you can, Patton.”

It’s a really bad fucking idea. I want Pippa. I haven’t been involved with a woman for a really long time. I’ve been dating my hand more often than not. Being stuck on a bus with a woman who checks all the boxes for me is kind of dangerous. But…I can’t resist that challenge.

“You heard him, boys. Leave the delicate genius to his work.”

She ushers my brothers out of my cabin, then stops at the doorway and turns to look back at me. “I’ll be texting you soon, and I will not bother you other than that unless it is important.”

She offers me another sweet smile that causes my cock twitching again, then slips out the door shutting it behind her quietly.

This book was originally released under the name of Maya Reed.

Prepare your heart and cold shower because Melissa Schroeder is coming in HOT with this instalove romance.

I loved the chemistry between Pippa & Gareth.

An edge of your seat emotional thrill ride from beginning to end.

The story has some drama, longing, is sweet, romantic and of course has some amazing hot smexy passion.

Wowsa this book is absolutely fantastic...

This was a sweet, hot instalove romance