Conquering India was the first full menage I had ever written. It’s the story of an older woman and two younger men in San Antonio. I really enjoyed it and was excited when her friend Delilah popped up in the story. I knew as soon as I met her, I would have to write her story:)
Remember to vote for your favorite hero from this year’s releases! 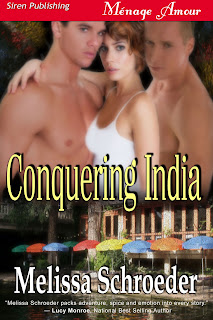 View the TRAILER
Read the Reviews

Caterer India Singer is getting her life on track, hoping to make it big with her new company. She doesn’t need any distractions…especially a younger man. She won’t get involved with another man destined to leave her. But security expert Wade Thompson won’t take no for an answer.
Wade knows exactly what he wants and just how to get it. He’s pulling out the stops because he’s sure India’s the woman for him and his best friend and business partner, Marc Jasper. Marc isn’t too sure and tries to keep India at arm’s length. When a threat to India has her in constant contact with Marc, the lure of the curvy older woman is too much to ignore. But when both men raise the stakes and ask for more than just a fling, will India play it safe to protect her heart, or will she take another chance on love?
EXCERPT
Wade chuckled as he rose and then moved around the bed to the nightstand. She tried to see what was happening, but Marc was there covering her body with his. He held her face in his hands and without closing his eyes, he bent his head and took her mouth. His tongue slipped in immediately, dancing along hers, tempting, teasing, driving her out of her mind. She wanted to close her eyes, ignore the intensity she saw in Marc’s clear gaze, but she could not.
He slipped his hands up and speared his fingers through her hair, as he slanted his mouth, closed his eyes, and took the kiss to another level.
Every alarm bell in her body went off. Not in fear, but in pleasure. Damn, the man could kiss, could drive her insane with just his tongue. India slipped her hands up over his shoulders, trying to pull him closer. The pulse of need that both Marc and Wade had built in her morphed into something she could not seem to comprehend or control. It throbbed from her pussy and sent warmth flowing throughout her body. The craving they’d created took over every other thought.
He rolled them on the bed, so that she was on top of him. She gasped. She couldn’t help it when she found herself looking down at him. His cock pulsed against her sex. Closing her eyes, she twisted her hips and felt another coating of her juices on her slit.
Wade gained the bed and moved behind her. Marc slid his hands up her torso to her breasts, playing with her nipples, caressing her flesh possessively.
“God, these are gorgeous,” Marc said, as he weighed them in his hands, then pinched her nipples again.
Wade leaned over her, kissed her neck, then looked down at Marc. “And so fucking responsive. Look at those pretty nipples begging to be touched.”
The dark need in both their voices spoke to her own, to an inner appetite she didn’t know she possessed. But it swamped her, rising up and taking over any fear she might have had.
Wade moved away, then she felt his finger at her puckered hole. When he first slipped it in, she teared up, the pain not so much of a shock. She felt the cool gel he had coated his finger with as he pushed past the ring of muscles and slipped all the way in.
“Christ,” he said, his voice barely a whisper and filled with awe.
He added another finger, coated with gel and she shuddered as the pleasure/pain twisted through her. Marc slipped his finger over her clit, massaging it, reminding her of what was to come. Both men continued to tease her as the tension in her stomach dropped to her sex. Little shivers of delight moved over her, as the men penetrated both holes.
“I can’t wait,” Marc said.
India opened her eyes at the desperation she heard in his voice. In the weeks she had known him, she had come to think of him as the one in command, but at the moment, he had little of that. He reached beside him where Wade had put two condoms.
With dexterity and amazing speed, he ripped open the condom. She tried to help him put it on, but he pushed her hands away. She giggled at his frown and he looked up.
“You look so cute when you frown,” she said then gasped when Wade twisted his fingers inside her anus. Tendrils of pleasure floated through her body and she moaned.
“Don’t get so naughty, India,” Wade said.
Marc smiled up at her. “We know just how to drive you insane before we give you satisfaction. We’ll make you beg.”