After over a year of waiting after turning in the project, A Little Harmless Obsession was finally released in Sept. I was so happy to share May and Evan’s story with readers who had fallen for them in other books as well as gain new readers. I think that Evan will always hold a little piece of my heart.
Remember to vote for your favorite hero this year:) 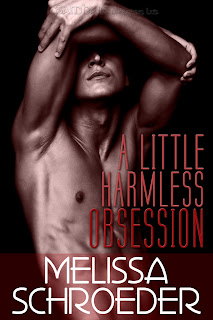 Check out the Trailer
Read the Reviews

What begins as a quest for submission becomes an unrelenting need for love.
May Aiona’s crush on sexy Evan Chambers is a bad habit that should be easy to break. It’s not like he’s ever noticed her. Looking for a safe place to release the reins of control and explore her curiosity about BDSM, May takes a friend up on an invitation to visit an exclusive bondage club—all she has to agree to is a public submission.
Evan can’t help but notice the exotically beautiful May. But despite his success, the dirty secrets of his past whisper that he’ll never be good enough for her. When Evan sees her standing in his club ready to submit to his best friend, he gives in to the thing he wants most—May as his sub. After their session, he knows one night will never be enough. But loving May isn’t easy for a man always ready to take charge. She might like to submit in the bedroom, but she doesn’t like anyone telling her what to do outside of it.
When May insists she’s not in any danger from the person seemingly obsessed with her, she ends up in the sights of a deranged stalker—with Evan possibly too far away to help.
Warning: This book contains sexy Hawaiian settings, crazy relatives, and a submission scene that leaves the heroine breathless and the hero frustrated. There are toys, bondage, and love scenes so hot, you’ll need ice water and a towel. Remember, it’s a Harmless story, so you know there’s nothing harmless about it.
EXCERPT
“There are no rules against showing your pleasure. It will help me understand what you want…need from me.”
He rolled one nipple between his fingers. A low moan escaped. “That’s good.”
With one last soft pinch to each nipple, he released her and unhooked the restraints from the ceiling. Rubbing his hands down her arms, he led her toward the middle of the platform. A crinkle formed above her eyes telling him she was confused. While some Doms got off on keeping a sub completely in the dark, and it did have its place in some training, a new sub needed to know the basics to ease their nerves. Anticipation was one thing, being skittish was another thing all together.
“I don’t like leaving anyone in that position for too long. It’s not good for the circulation, and it really isn’t the ideal position for what I had in mind.”
Evan couldn’t keep the excitement or need out of his voice. He wasn’t sure she could recognize it. His body screamed to conquer, to take her as his, but he knew it wouldn’t happen. It was his job to initiate her, nothing else. The idea that he would never touch her after tonight ate at him He led her down the stairs to one of his favorite pieces of equipment. Shaped like a gymnasium horse, it could be lowered in height and provided hooks on the side for her restraints. He still said nothing, knowing that the silence added a level of tension that would bring her a more glorious release in the end.
Without a word, he pressed on her lower back, urging her forward. Soon he had her bent over, her cuffs hooked on, and her ass in the perfect position for the ultimate viewing experience for the audience. He’d made sure the audio had been turned off for them, although he knew that had not been Micah’s intention. But he wanted music for the two of them, just for them. After he picked out his favorite playlist, one that always reminded him of May, the smooth, sensual voice of Lauryn Hill filled the room. He moved the paddle into grabbing distance.
Not being able to resist, he placed both hands on the fullest part of her ass and squeezed. She rarely wore jeans or pants to work, so seeing the actual shape of her rear didn’t happen that often. Still, it wouldn’t matter after tonight. Every time he closed his eyes he would probably see it. Lord knows he’d dream of taking her from behind. He slid his hands up and over to the small of her back. His fingers trembled and he had to grit his teeth to fight the desire to slip them between her cheeks, into the small puckered hole. She tensed slightly. With one last lingering caress, he moved to pick up the paddle.
“I glanced at your questionnaire.” He rubbed the padded toy over her rear end. “You seem to have a…shall we call it…interest in spankings.”

6 Comments on “Year in Review: A Little Harmless Obsession”