Once Upon an Accident Bundle - Melissa Schroeder

Part of the Once Upon an Accident Series 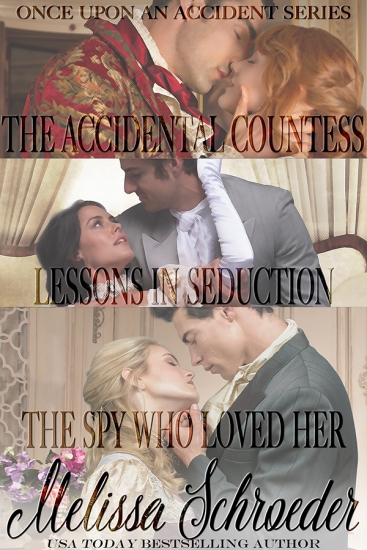 Includes the first three books from the Once Upon an Accident Series.

Being a spinster was much easier than becoming the accidental countess and it definitely didn’t prepare her for falling in love.

Colleen MacGregor doesn’t like rich men, especially rich titled men. Still, her guilt won’t allow her to leave Sebastian passed out in the snow. Before he can leave, they are caught in a compromising situation. Under an agreement he will leave and never bother her again, Colleen marries a man she barely knows to save her reputation. Before she can really stop anything, she is whisked to London, where she is transformed into an Original and captures the attention of the ton—not to mention her husband.

Sebastian Ware thinks he’ll never see the sharp-tongued spinster again. He never planned on becoming the next Earl of Penwyth…or on falling in love. But before he can declare his feelings, he must protect her from an enemy who wants them both dead. Racing against the clock, Sebastian strives to save them both so he can turn their accidental love into a love for eternity.

What is a lady to do when her chosen rake changes her lessons in seduction to lessons of love?

Cecily Ware understands how society works. At the age of twenty-six, she has been around long enough to know that she is doomed to spinsterhood. But she refuses to go without ever knowing what it is like to be with a man. So she comes up with a wonderful plan to find a rake to teach her, complete with a list of possibilities. At the top of that list sits Douglas the Duke of Ethingham.

When he asks Lady Cecily to waltz, Douglas never expected her to request seduction, or that it would intrigue him quite as much. With each glance, each smile, each touch, he finds himself falling under her spell, unable to resist her lure. In her he finds a soul mate, someone as lonely as he is, who understands his pain, and will give herself to him without demands or expectations. But as he finds himself falling in love, he also discovers a wicked plot to kill Lady Cicely. As they race to discover who wants her dead, they fall deeper in love, leaving them to decide if the lessons in seduction could lead to a lifetime of happiness

»WARNING: The following book contains: Explicit love scenes, propositions made on dance floors, mistaken identity of a kissing partner and many scenes of seduction.

They Spy Who Loved Her

To keep her safe, he will not only have to risk his life, but also his heart.

Lady Anna was once considered the catch of the season. Now, three years after she fell for a man who tried to murder her cousin, she eases her guilt with charity work at an orphanage. Until her mother insists she do her duty.

Attending her cousin’s ball is irritating enough. It’s her one dance with Daniel, the unscrupulous Earl of Bridgerton, that rubs her nerves raw. And oddly leaves her senses on the edge of arousal.

The ton sees Daniel as a scoundrel. In truth, like centuries of Bridgertons before him, he leads a vast network of spies, protecting England from her worst enemies. His resolve never to marry means the one woman he’s always wanted—Lady Anna—is off limits. Especially now that his father’s murderer is coming after him as well.

At first, Anna wonders if Daniel was put on this earth just to annoy her. It’s only when she finds him injured that his mask begins to fall away—and so do the barriers between them. But their flaring passion puts her right where Daniel didn’t want her. Next on a killer’s list.

» WARNING: The following book contains: spies, musicales, men who think they know everything, women who know they do not, naughty liaisons, matchmaking mamas, and a seduction that will curl your toes.

Part of the Once Upon an Accident Series 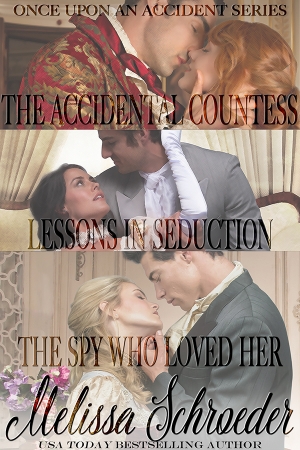 The Accidental Countess is a fun historical romance.

The Spy Who Loved Her hits many high marks with the romance, dialogue and steamy love scenes. This is one of the better recent historical romances I’ve read and one I recommend you try.

It is hard to wish for anything other than a happy ending for this perfectly suited pair! -4 stars

I very much enjoyed The Spy Who Loved Her.