Falling for the Girl Next Door - Melissa Schroeder

Book 2 in the Fighting Sullivans 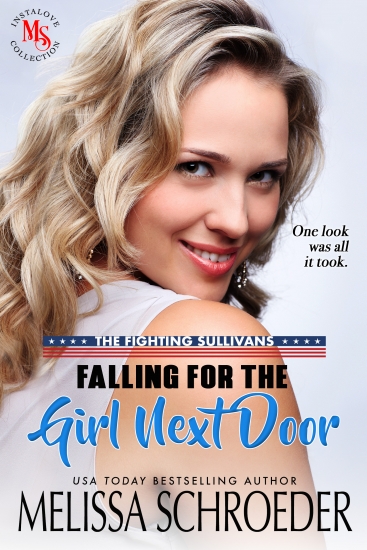 From the USA Today Bestselling author of The Santinis comes a story of another group of military brothers who are about to meet the women who will own their hearts.

Alyx Sullivan finds that opposites attract in the most delightful ways.

My siblings give me crap about being the one with the bad temper. I’m not denying it. I say I make it work for me. Especially with my neighbors. They’ve all stopped making eye contact with me in the elevator, and I like it that way.

She’s my next door neighbor, teacher of little people, and all around happy person. She probably wakes up smiling and happy. The first moment we met, I wanted her, but I am not a man made for happily ever afters.

So I’ve been as rude as possible to her, but she just doesn’t care. And with each interaction, it’s harder to resist the need I have for her. She’s wholesome and pretty and I just want to do all kinds of wicked things to her and with her…just EVERYTHING.

And in one moment, I  give into my desires and let’s just say…MIND BLOWN…along with other things.

Only, someone from her past is stalking her, and I will do everything I can to protect the happy go lucky woman I have come to love.

This book will release into Kindle Unlimited, but then go into wide distribution.

Book 2 in the Fighting Sullivans 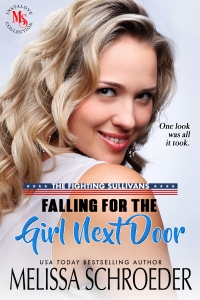 Zipping up the bag of cookies, I sigh. Out of all my neighbors, Mr. Sullivan has been the hardest to win over. Most of the time, my cookies do the trick. Even the grumpiest neighbor can’t resist a well-made cookie.  This is the third batch I’m making for him. It only took one batch for everyone else on this floor.  They all love me. ‘Dark and mysterious’ next door still won’t crack a smile.

Don’t get me wrong. He eats the cookies. I’ve left two bags by his door, but he has yet to even acknowledge them. I can’t take the idea that I have a neighbor who doesn’t like me. I know it’s a sickness. I can’t deal with that. It makes me anxious. I guess it’s because it was always only Mom and me my whole life. We always made friends with our neighbors, but Mom was from Ireland, and she had been an only child like me.

My heart aches. She’s been gone for two years, and I still think about her every day. The only thing I have been thankful for is that she didn’t suffer long.

I push off those depressing thoughts. Not that I don’t love my mom, but Caroline Adams would be ticked off if she knew I was getting depressed over her death.

Just then, I hear someone walking down the hall and I hurry to the door. I look out my peephole and sure enough, the mysterious Mr. Sullivan passes by. I have found this is the easiest way to get to him. Stalking him through my peephole.

I grab the bag of cookies, then hurry to catch my neighbor. He’s almost in his apartment this time.

His shoulders fall like he’s disappointed, but I can’t fight the little thrill that zings through me. There’s something just so sexy about the man. I usually date men who wear khakis and work in offices. Like Jake from State Farm. I have a feeling that Mr. Sullivan doesn’t work in an office. He’s wearing a tight black t-shirt, a pair of worn jeans that conform to the most amazing ass I have ever seen.

Mr. Sullivan turns around, his dark eyes zeroing in on the bag. His dark hair is unruly, probably from the fall wind that is whipping through Denver right now. And did I mention his tattoos? His arms are full of colorful ink. I have never, not once, dated a man with tattoos.

His voice is like gravel and whisky all wrapped up in one melodious seduction. And better yet, he has no idea how sexy he sounds. I bet he thinks that his annoyance is a turn off, but all I can think about is how it would sound in the dark.

His gaze slowly makes its way up to meet mine. Heat flares there for a second before it’s banked. Oh, my. That was…well, sexy. I mean, I know it’s for my cookies and, no, that isn’t a euphemism.

Although I wish it was.

“You liked the other two bags, right?”

He hesitates, then shrugs. Oh, he did not like admitting to that.

“Listen, I made too many of these, and I’ll spend all night eating them. You would be helping me out.”

His tongue sweeps out over his bottom lip. This man. My hormones start to bounce. Not now, you nut jobs. This man doesn’t want me. He wants my cookies. Again, not a euphemism. And, yes again, I wish it was.

“They’re milk chocolate and macadamia nut. I know a lot of people use white chocolate, which really isn’t chocolate. Also, it sucks.”

He presses his lips together, and it’s probably to keep from yelling at me. I know I irritate him and that bothers me more than it should. I think everyone should give their neighbors a chance to be friendly. It goes with my job as a kindergarten teacher. Everything would be so much better if everyone would follow the rules their kindergarten teachers taught them.

“You’re not allergic, are you?”

“Now, I could just leave this here, but we both know that you will take it as soon as I do. And you need to make sure that Freddy doesn’t steal them.”

“Who the fuck is Freddy?”

I motion with my head to the neighbor across the hall.

His eyes narrow as he studies the door. “He steals your cookies?”

When he says it in that amazingly beautiful voice, my entire body heats up. I know he’s talking about the real cookies but come on. I mean, he has that sexy bedroom voice and the way it tumbles over the word cookie makes me want to climb him like he’s a tree.

“I do know that he was disappointed that I didn’t make any of those chocolate chip ones for him last time.”

He let me know about it. Freddy is about sixty-five and cranky as hell. The only reason I like talking to him is his Irish accent. He reminds me of my mother.

His gaze comes back to mine. He shakes his head.

I hold out the bag and shake them. “Go ahead. I won’t tell anyone.”

He hesitates, but then he reaches out and grabs the baggie.

I love when I make connections with my difficult students, and this is sort of the same. But not really because right now, I want to hug him—and not because we are friends. No, I want to rub against him like a cat.

His eyes narrow and I’m worried he’s going to chuck them back at me, so I step away and start back to my apartment.

I’m almost to my door when I hear him say, “Alyx.”

I pause and look at him.

I offer him a bright smile. I feel like I have won teacher of the year. “Alyx. I like it. Good night.”

I nod. “It’s Sunday, which means tomorrow’s Monday, and I have a full day ahead of me. I have to get to the school before seven-thirty. Good night.”

I slip inside my apartment, my heart beating so hard I almost pass out. The man is sexy beyond words. Like he would be the perfect book boyfriend if a reader liked the biker vibe. I don’t. Not really. Okay, this one time I do. And more than likely, I will have to spend time with my battery-operated boyfriend to relieve this crazy tension. That or I will be a zombie tomorrow.

This book will release into Kindle Unlimited, but then go into wide distribution. 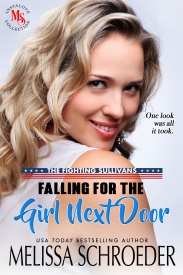