Book 1 in the Fighting Sullivans 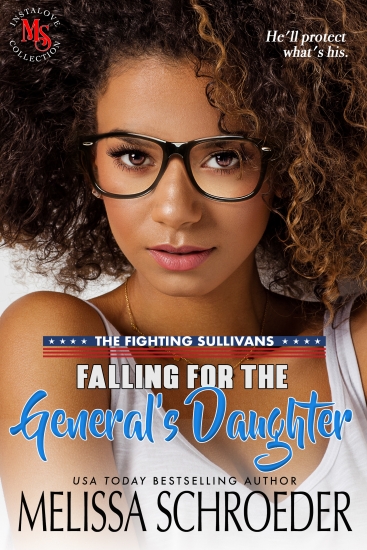 From the USA Today Bestselling author of The Santinis comes a story of another group of military brothers who are about to meet the women who will own their hearts.

When Raine Sullivan takes on an assignment, he has no idea he’s going to meet the woman of his dreams.

I’m the brother who likes to play pranks, to keep everyone laughing. But it isn’t a joke when I go to work for Sullivan Security, and especially when my old mentor and family friend General Allen needs my help. It seems his daughter has caught the attention of someone who has been cyber stalking her. I take the job without a second thought, remembering the sweet, slightly nerdy preteen I met years ago.

Only, she isn’t a preteen anymore. She’s beyond beautiful and brilliant. Another thing, geeky girls? They are sooo my thing. Not to mention, she has a wicked sense of humor, and while she seems sweet, she can cuss better than any Sullivan brother.

But coming onto her while I’m on the job would be unprofessional and besides, her father might just kill me. And he can do it. I know his history and there’s a reason he has enough medals on his chest to sink him to the bottom of the ocean.

As the cyber stalker goes into overdrive, we begin to spend all of our time together, and while I said I would resist seducing her, I didn’t say anything about not letting her seduce me.
Follow Melissa Schroeder’s board Falling for the General’s Daughter on Pinterest.

Book 1 in the Fighting Sullivans 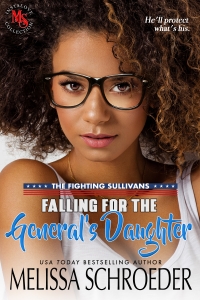 As I park my rented SUV by the curb, I turn and stare at the newest employee of Sullivan Security.

Devon rolls his eyes. “Not happening. I’ve heard stories about your sister.”

Okay, he has a point. As much as I love my little sister Allegra, she is the youngest of five and the only girl. It made her a little…scary.

“I just want you to entice her back to Denver.”

“First, that’s the most misogynistic thing I have heard you say. A lot of women want more out of life than getting married and having kids. Second, the stories.” He shudders over dramatically. “And I’m gay. With a boyfriend.”

He slips out of the car and starts walking up the sidewalk to the massive house where our client lives. I grab my gear and follow him.  I’m intent on my objective, but I don’t miss the signs that spring has finally sprung in the DC area. Trees are blooming, along with a burst of color from the flower beds. DC isn’t my favorite town, but I do like visiting.

“Listen, man, you wouldn’t have to do much.”

“You want me to romance your sister, and in your stupid mind, she would give up her career and run back to Denver.”

When he says it like that, it sounds stupid. “It’s a plan.”

Another roll of the eyes. “It’s a bad plan. What am I supposed to do when I get back? Just tell Ryan that she’s my new girlfriend?”

Okay, it sounds like an evil plan, but I really want my sister to move back to Denver. She lives here on the East Coast, and I hate that I don’t get to see her stupid face.

Allegra and I are close, being that we are the youngest two out of five. I can fly out here, and we text almost every freaking day, but it’s not the same. I can’t just call her up and say we should have dinner. Call me a sap, but I love my sister.

The door opens before I continue my argument with Devon. General Mike Allen is smiling at me. He’s one of the most well-known Marine generals of all time, let alone being an African American general. He’s not only a hardened warrior. He’s smart, like Mensa level kind of smart.

“Raine Sullivan, get in here.”

There’s a big hug, and I introduce him to Devon. “I know that you don’t normally handle things in Virginia, but I’m worried about what’s been going on.”

I nod because I understand. Sullivan Security does have an office in DC, but the family all work out of the main office. This has to do with family, and family always comes first. Hence the reason I want Allegra to move back to Denver. And when the hell did I become a guy who used the word hence?

We follow General Allen into the living room. He’s stationed at the Pentagon at the moment. Dad was stationed with him and served under him several times during his career in the Marines.

“So, do you want to tell me what this is all about?”

“This is about Katherine, like I said. She seems to have an issue with a little cyberstalking.”

That has me sitting up straighter. The fact that he wanted Sullivan Security to keep his daughter safe meant a lot. I knew it was a family issue and cyberstalking, but I wasn’t entirely sure. I thought it might be someone in his extended family, not his pride and joy.

“What do you mean an issue?” Devon asks.

“Why don’t I have her come tell you about it?”

We both nod and wait while he walks over to the stairs and calls up for his daughter.

“Do you think this might be something he’s blowing out of proportion?” Devon asks just loud enough for me to hear.

“Naw. He’s not like that. If it was something simple, he would have had someone out here handle it. She’s not his dependent anymore, I don’t think.” I met her once or twice when she was a tween, but I can’t remember just how old she is. “Either way, the military would take it seriously if he asked, but apparently, he wanted a more personal touch maybe.”

The general steps back into the living room. “She’ll be here in a second. She was apparently doing the live thing on her Instagram.”

“Does she have a lot of followers?” Devon asks, his phone out. I know he’s already looking her up.

“I really don’t know. I don’t understand all of that stuff.”

“Make a hole, Dad,” a sweet voice says from behind him. He looks behind him, chuckling, and he steps aside.

My entire world tilts on its axis.

This is not the teenager I knew. This is a woman, full-grown and gorgeous. She’s a tiny thing, with subtle curves, light brown skin, and hazel eyes. She’s got black-framed glasses that definitely trend towards geeky. She’s wearing a t-shirt with the saying, “Screw your lab safety, I want my superpowers,” on it. So yeah, she’s definitely a geek.

“Katherine, this is Devon Hawkins, and of course, you probably remember Raine Sullivan.”

She shakes Devon’s hand, then turns to me.

“Yeah, I think I kind of remember you.”

She offers me a cheeky smile that tells me that she might just be fucking with me. There’s a hint of the South in her voice. Then I remember her mother was from Georgia.

And I stand there, staring at her without saying anything. I really can’t. I am using all of my brainpower not to get an erection. Especially not right in front of her father, a man I respect. Maybe it’s hard because all I want to know is how she sounds moaning my name as I’m inside her.

Devon steps forward and takes over the conversation.

“So, we need to talk about what’s been going on,” Devon says, which nudges me into action.

“Let’s have a seat, and we can chat about it,” General Allen says.

We all sit, with Katherine and her father taking the sofa in front of a massive picture window. Devon and I take our places in overstuffed chairs, and we prepare to listen to what’s going on. Or at least I try to listen and be professional.

The problem is Katherine. She’s animated, using her hands as she speaks, along with her expressions.

“So, you couldn’t block the person?” Devon asks, pulling me out of my thoughts.

“No. As soon as I would block him, he would come back as another name. Just slightly different. He would add a middle initial, or he would change the last name. The tone of the attacks was the same. But for a while, he went away, and while I know it probably wasn’t smart, I sort of just hoped he would go away.”

“Not stupid,” I say. “There are trolls out there who spend all their time doing this, and if you don’t engage, they tend to go away. What they want is attention.”

Her gaze swings my way, and the moment we make eye contact, I forget my name. Hell, I forget where I am. All I can see is those hazel eyes.

“Thank you for that. And one thing I did was keep a record, and I did contact social media companies and the university’s IT department.”

“But you didn’t tell your mother or me.”

She sighs. “I didn’t want to worry you, and as soon as he popped back up, I did come to you.”

Her father doesn’t look happy, and I can’t blame him. He wants to protect his daughter.

“We can’t talk about past actions, but we can start tracing what happened. I have a friend who works in the Maryland University System, so I am sure I might be able to get a little bit more done.”

She yanks her attention away from me and looks at Devon. “That would be fantastic.”

“Well, let’s start talking about everything that went down, and you said you had dates?”

She nods. “I have them on my computer, but Dad had me write everything down in that.” She points to a notebook.

“Great. Now, to the questions.”

Thank God Devon is taking care of this because I am sitting here realizing that my life will never be the same.