Military Week: SE Jakes - Melissa Schroeder
SE Jakes Salutes the Military
When Mel asked me to join in this salute to military heroes, saying yes was so easy.  When she asked me to talk about why I write military romance, that was even easier.
First of all, military men (and women) are true heroes.  What better character base is there?   Honorable, loyal, protecting our country…just thinking about their sacrifices is enough to bring tears to my eyes.  I know many military men and women and I’m so thankful for their service.
As for military romance…for me, there’s nothing better.  It’s one of my favorite genres to read, so writing it is a natural bent.  There’s nothing better than a man in uniform – he’s alpha tough, strong as hell, save the world badass…and those are my favorite type of men when they fall in love.  All that and the added vulnerability makes them that much more compelling.  Because when warriors fall, they fall hard. When I decided to combine these men in uniform with m/m romance, I knew I’d found my niche.
My next book in the Men In Uniform series is called BOUND BY DANGER – for those keeping track, it’s Tomcat’s story and he and Jace we definitely combustible. 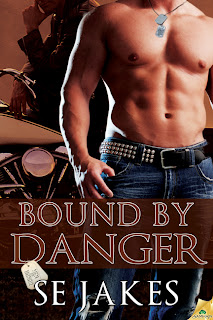