My love of military romance dates back to three, (two alike and one very different) television series and grew from there. The first series, M*A*S*H aired from 1972 to 1983. But I don’t remember a time I didn’t watch it, leaning against my grandmother’s knee and being amazed by these men and women who were in the thick of it. In the early 1980s came the A-Team. These military specialists and the idea that they’d been framed, but still tried to do good things was extremely romantic to me.  The third series, China Beach, ripped open the joy and the agony of loving someone in the military. You couldn’t not love Boonie or McMurphy. You had to feel their pain and you had to mourn with them.

These were all series that I watched while growing up and coupled with the exposure to seeing images of coffins returned to Dover, military officers in their dress clothes and more, I couldn’t help but want to be like these ‘heroes.’  The Vietnam backlash was very big when I was younger, but my grandmother was just not one of those people. She believed that these men and women went there to defend our country and it didn’t matter if you didn’t agree with the action — you supported those who served.

In the last thirty years, we’ve seen action on the news in Panama, Iraq (twice), Afghanistan, Somalia and more. I remember being in Great Britain during the Falkland Islands War and watching it every day on television. I grew up listening to my grandmother’s stories of World War II and surviving it.

I know sailors, soldiers, Marines and airmen. Their capacity for giving to their country without thought for life and limb secures my liberty – how can that not move me? I’ve always found the tales of those men and women who served finding love especially moving, especially meaningful and desperately needed.

Writing them feels a little like giving back, a small contribution to honor the tremendous gift that our military bestows upon us. Writing military romance may not win a war or save a life, but if it – like those series I watched and books I read when I was growing up – helps just one person respect our military more…that’s a goal I embrace.

Our military defends our freedoms, our ‘rights’ to write and writing military romance gives me a chance to give it back and reading military romance reminds me that even in the darkest of times, we have hope. One of the most romantic military images of all time is the sailor and nurse seen kissing in the iconic 1945 Life magazine photograph from the end of World War II.  That moment captured a fever, a feeling, a fathomless well of romance, hope, and survival that defines military romance today. 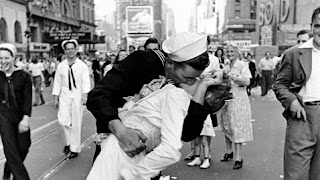 I salute those who serve and they who love those who serve and their families who must wait, hope and remember.
When you look at that Times Square image, what do you feel? I’ll give away the first 3 books in digital to one commenter. Open international. I’ll post the winner in the comments Monday June 4th. You MUST come back to see if you’ve won.
Always a Marine – 1NS Series
Once Her Man, Always Her Man – Available Now
Retreat Hell! She Just Got Here – Available Now
Tell It To The Marine – May 2012
Proud To Serve Her – June 2012
Her Marine – July 2012