Military Week: Cat Johnson - Melissa Schroeder
CAT JOHNSON’S RED HOT & TRUE BLUE MILITARY HEROES
I get asked the same question a lot—why did I start writing military romance? The answer is easy. I loved reading military romance. Suzanne Brockmann and Alison Kent were fixtures on my keeper shelf, so when I got my first romance contract in 2006, I asked my then editor, if I tried my hand at a military romance would she be interested? Her answer was yes.
That was the birth of the Red, Hot, & Blue series, currently releasing with Samhain Publishing. It started out with a team of SpecOps, but as I began researching the details for those first stories and came in contact with actual deployed troops, my ideas and story began to focus more on the tankers, the infantry, the boots on the ground. And as the war changed, the hot spots moving from Ramadi, Iraq to the border provinces in the mountains separating Pakistan from Afghanistan, so did my settings change to reflect the reality.  Reading through my series from book 1 the reader will notice the shifts—from the elite BlackOps, to the soldiers dodging snipers in Ramadi, to the slight side turn the series takes when I focus on the hometown and the family members of some of the military heroes, to the eventual move to the new hotspots in Afghanistan.
I hope the readers enjoy the journey as much as I enjoyed getting to know those real life men who inspired the stories.
Cat Johnson
www.catjohnson.net
http://twitter.com/cat_johnson
http://facebook.com/catjohnsonauthor 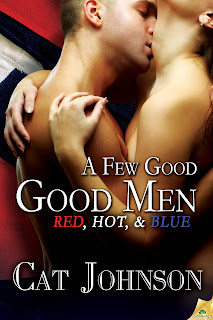 A FEW GOOD MEN (Red, Hot, & Blue Novel) by CAT JOHNSON
eBook release June 19, 2012, PREORDER now from:
Samhain Publishing
Amazon Kindle
Barnes & Noble Nook
Books on Board
Please enjoy the following excerpt from A FEW GOOD MEN…
He has met the enemy…but he’s never fought desire like this.
Deployed in the deadliest place on earth, Army Staff Sergeant John Blake relies on caffeine, adrenaline, years of training and sheer force of will to get through his days. He has no problem with his tank crew passing around a sexy romance novel, but John’s a fighter, not a lover. He’ll pass. Winding up as the author’s accidental pen pal wasn’t in his plan, but there’s something about her sweet, caring emails that has him looking forward to checking his inbox.
Week after week, Maureen Mullen, aka erotic romance writer Summer Winters, has dated one loser after another in a quest to find the last decent man on earth. Now it seems she’s found him—halfway around the world. When it comes to falling for unavailable men, she’s batting a thousand.
Gradually, the emails between the war-hardened warrior and the writer of passionate prose heat up to the point of keeping them up warm and wanting at night. Soon they’re wondering if it’s possible to build something solid out of cyberspace, or if it’s just an emotional mirage that will dissolve in the heat of reality.
Warning: Contains some steamy phone calls from the war zone and one hell of a sexy first meeting between two strangers who are already in love.
Excerpt:
Jazzy had been alive when the medevac helicopter took him away, but now that John knew he would be fine, he was pretty sure he wanted to kill him.
John ran his hands over his face. “Why can’t you wait to email her when you get out of here?”
“Because the docs say I can’t leave this hospital bed for almost a week, and then I have to go straight to my bunk and not move for another week except to go to the head. So you have to do it. I can’t be wandering around the MWR. I might collapse and injure myself.” He held a hand to his ribcage and looked pitiful.
“Look. I have no problem calling your wife for you. Hell, I’ll even contact your grandmother and dear old aunt if you want, but I am not emailing your sex-writer pen pal, Summer Winters.” John was sticking to this resolution even though Jazzy was giving him the hurt puppy eyes.
He watched the man in the bed before him shrug and then wince in spite of the large number of painkillers John knew was coursing through his veins. The areas covered with white gauze bandages outnumbered those without, making the concussion and contusions seem worse. But John was well aware that with explosions it was the internal injuries that could kill you, no matter how good or bad the exterior looked.
“That’s okay, sir. It’s not like I got injured following an order you, my superior officer, gave me or anything—oh wait. It is exactly that.” Jazzy couldn’t suppress the grin that crossed his lips.
He was trying guilt now? Dammit, though, it was the truth. Jazzy had been out of that tank and in harm’s way following his order.
John growled, a low rumbling sound of frustration and defeat. “I really hate you right about now. You do know that, don’t you?”
Jazzy smiled wider. “Yes, sir. And might I add you’re not the first superior officer I’ve had say that. So her email address is summer at summer winters dot com. Do you want me to write that down?” Jazzy picked up the pad of paper and pen he kept on his bed so he could write his wife daily.
“No, thank you. I believe I can remember that very complicated address.” John scowled until his lips formed one tight line.
Don’t miss the rest of The Red, Hot, & Blue Series from Samhain Publishing
Available Now:
Trey (Book 1)
Jack (Book 2)
Jimmy (Book 3)
Red Blooded(a print compilation of the eBooks Trey, Jack and Jimmy)
Jared (Book 4)
Cole (Book 5)
Bobby (Book 6)
Coming Soon:
A Few Good Men (Book 7)
Model Soldier (Book 8)
A Prince Among Men (Book 9)
If you enjoy military romance, comment and tell us why!
Contest: Cat will be giving away to one lucky commenter their choice of the following Red, Hot & Blue series eBooks: Choose from Trey, Jack, Jimmy, Jared, Cole or Bobby. (International entries included)