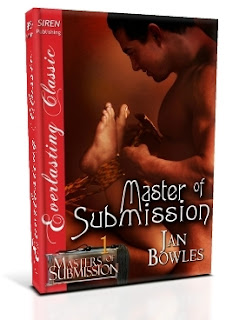 Thirty-year-old English lawyer, Emma Parkes, believes Club Submission holds the key to her best friend’s disappearance. Well out of her comfort zone, Emma’s eyes are opened wide when she observes the Masters of Submission at work. They’re so confident and sexually arousing–especially beautiful blue eyed Master Zane.
Submission member and Dom, Zane Anders, frequently enjoys all the club has to offer. The wealthy, forty-year-old diamond importer has everything he could possibly need–everything except for love. A natural dominant, he’s not looking for a permanent submissive in his life. But perhaps he’ll make an exception for the stunning lawyer from London.
When Club Submission is plunged into a high profile murder investigation, its very existence is put in jeopardy.
Can Emma unlock the truth, or will the devastatingly handsome Zane Anders, a Master of Submission, unlock her deepest sexual desires, instead?

An excerpt from Master of Submission
He smiled, and looked tenderly at her. “You’re an enigma all right. I can’t quite figure you out. You’re dressed right for the scene, but I get the feeling that you’re really just an innocent. A mere baby, when it comes to knowing exactly what goes on here.”
“What do you mean?”
“I know you were sexually aroused, watching the show Jessica and Cole put on.”
Emma wasn’t about to admit anything of the sort. She hadn’t been brought up that way. “I wasn’t. I—”
“You don’t have to be scared of your own feelings. Just be true to yourself.”
She lied again. “I am.” Feeling slightly irritated with his perceptive observations, she added cuttingly, “You don’t know me. We’ve only just met—”
At that moment he threaded his fingers through her hair. For such a powerful man, his surprisingly tender touch caught her off guard, and she allowed him to angle her face to his. He leaned down and pressed his lips to hers. His kiss felt so gentle. She closed her eyes and sighed in utter contentment. No man had ever kissed her this sensually before. When her lips parted, he deepened the kiss, sliding his tongue inside her mouth.
It had been a long time since she’d been kissed—too long. She responded by threading her arms around his neck, and kissing him back. Her skin where it touched his felt electrified. Tiny pinpricks rippled and pulsed as she tried to get even closer.
Zane pressed her back against the wall. A waist-high shelf ran around the edge of the room. He placed his hands under her butt, and effortlessly lifted her onto it. Her legs automatically spread apart, and he moved between them. Through his leather jeans, she felt his hard erection pinning her in place. It pushed and twitched against the crotch of her moist panties. My God, that feels good. Too good. As he continued the kiss, she felt thoroughly possessed by him, and whimpered against his mouth with pure pleasure. Each time she squirmed with enjoyment, she ground her pussy against his hard prick.
Like a bolt from the blue, Emma suddenly realized where she was and what she was doing. “Zane, I’m not sure. I—”
When he pulled away, molten heat shone in his gaze. “Don’t fight your feelings, baby. Go with them.” He unclasped her hands from around his neck and then held them at her side. “Shhh, everything is okay. Everything is just fine.”
His comforting words made her rock her pussy against his prick once more. Her skirt had ridden high up her thighs, and she saw her panties pressed against the ridge of his erection. Even through the leather of his black jeans, his dick looked huge. Reluctantly she dragged her gaze away from the impressive bulge and looked right at him.
He whispered in her ear, “You like the feel of my hard dick against your pussy. No point in denying it. Tell me the truth. I’ll know if you’re lying.”
Emma longed to say yes, because he spoke the truth, but what she was doing was completely out of character. Anger surged in her veins, and she clamped her mouth shut. This wasn’t like her at all. She’d always been in control. She’d had no idea that feeling helpless and vulnerable could be such a serious turn-on, especially with a man like Zane. His blue eyes searched her face as he waited for her answer. She finally relented.
“You know I’m turned on. So why ask?”
“Because I want to hear it from your own lips, in that beautiful cut-glass English accent of yours.”
“Okay, I’m turned on.”
“I think you meant to say, ‘Yes, I’m turned on. Thank you, Master Zane.’”
She was fully aware he was trying to overpower her with his personality and presence. Should she stand her ground? Did she want to? The words demurely slipped from her lips without any effort whatsoever. “You turn me on. Thank you, Master Zane.”
“So when was the last time you orgasmed, if ever?”
Heat rose in her cheeks. She hadn’t expected him to ask that. “That’s none of your bu—”
“Baby, the only thing between my cock and your pussy is a scrap of lace and my zipper. I’m making it my business.”
“I can’t remember,” she murmured miserably. It was embarrassing just thinking about it. She must be useless in bed. It was one of the reasons why she dated so very rarely. Emma bit down on her bottom lip. “I dated a man last Christmas. We were together for about three months in total. He tried everything he knew to give me an orgasm, but couldn’t. He gave up in the end.” She raised her eyes to his. The breath hitched in her throat at the way he looked at her. He was so primal and masculine.
Zane kissed her lightly on the mouth. “See, confiding in me didn’t hurt, did it?”
Emma was aware she blushed. “No, but it’s embarrassing.”
“Do you trust me, Emma?”
You can find out more about my first book here.
http://www.bookstrand.com/master-of-submission
The 2nd book in the series is Destined for the Dom.

Hunter introduces Zoe to Club Submission and the D/s lifestyle he now enjoys. Using the skills of the dominant, he brings stability and control to her otherwise chaotic life, and she soon falls head over heels in love with the powerful Master.

Ten years as a Marine has left Hunter cold and detached. He’s seen enough death and destruction to last him a lifetime. Keeping aloof protects him from losing the people he loves the most. Those three little words–I love you–will never pass his lips.

Will Zoe’s sweet submission melt the ice that surrounds his heart? Is she truly destined for the Dom? 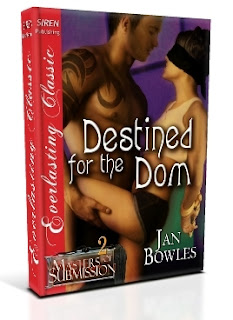 You can find out more about the 2nd book in the series from here.

http://www.bookstrand.com/destined-for-the-dom
For those of you who would like to be entered into the draw to win a copy of both books, please leave a comment. Your names will be placed into the cyber hat, and the winner will receive a copy of both books on or after 28th May 2012. Thanks for reading.
If you’d like to know more about Jan Bowles, and her books, go to her website at www.janbowles.com