If you’re wondering about that blog title, In Caelum Fero means “I am in Heaven” and it’s the name of a song that headlined the soundtrack I listened to when I was writing Cassandra’s Dilemma.   I dropped by here last month to give you a first taste sneak peek at the upcoming novel, which is due out on February 15, and yes, I am getting really excited!

Does Music Make a Story?
Writing is a very solitary activity.  So much of what we do is spent when we are alone with ourselves, our laptops (or with pen and paper or desktop, take your pick).  During my novel prep time (that day or two before I actually start writing) I make a point of looking up the information about a location (in this case the city of Chicago) or historical data if I plan to reference it (could just be a date or three) and I make my soundtrack.
Every novel gets a soundtrack, usually songs that make me think of the characters, the storylines, the romance or just the general atmosphere of the novel.  Rarely does that soundtrack come from one single artist, except in the case of Cassandra’s Dilemma.
I wrote the first draft of the novel over the summer, sitting next to a swimming pool in the scorching Texas heat with only an iced coffee and an umbrella for shade.  But it was the most productive writing time I’d spent up until then.  The child was ensconced in the pool, playing with friends under the watchful supervision of the lifeguards, I had my headphones, my iced coffee and my world unfurling before me on the screen.
Take Me To Another World
In this case, it took one song to transport me, literally into a world where fantasy met reality – or in this case, brought me wonderful images of Legolas in the modern world, with the rising crescendos that summoned images of forests, mountains and sweeping panoramas interspersed with a hint of sex and mysticism.
Sounds like a lot for a few songs, right? But this soundtrack did it, every single time. Whether I was writing, editing, revising or massaging some portion of the manuscript, all I needed to return to Cassandra’s world was a little Adiemus from their In Caelum Fero to their Kayama to the Cantus Insolitus, all I had to do was close my eyes and I could see the story playing out in living color.
The Ear of the Beholder
Music is a powerful influence whether it’s the absence of it in a too quiet scene or the pulsing descant in counterpoint to the action or the sweeping crescendo as the story rises to its climax.  All I know is that for me, when I find those right songs, the words just seem to flow.
As a reader, do you identify music with stories and if you do, what is one song that you associate with a book?  I’d love to know.  One lucky commentator will win a copy of Cassandra’s Dilemma in PDF. Make sure you leave your email address so my assistant (Brandy) can contact you. It will stay open until noon (MST) Friday (Feb 10). 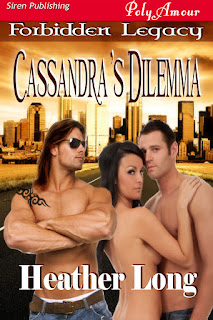 Smoking Hot Excerpt:
Cassie lowered her gaze to focus on his mouth. The lips were full and even, as though carved by an artist perfecting his technique. Her lips tingled at the memory of how his lips caressed hers. “You kissed me last night.”

His eyes darkened with inexplicable emotion. “Are you planning to protest your virtue?”

“Hardly.” And she was not a nun. She’d been kissed before. She’d been far more than kissed. But aching heat pooled in her belly just thinking of how his mouth shaped over hers, how his breath feathered her cheeks, how his taste lingered on her tongue.

He brushed the back of his hand down her cheek, the gesture a shocking mixture of both intimacy and innocence. “Then what?”

“Why did you kiss me?” Her gaze drifted over his lips and along the line of his jaw before drifting down to the expanse of muscled chest. He was lean but solid, and the sheet drifted perilously close to his waist. She suspected that the sheet was all he wore.

Her breasts swelled under Helcyon’s gaze, as though it were his hands roaming over her. Cassie’s eyes fell half-closed, anticipated pleasure tightening her sex. She exhaled slowly, trying to rein in her rebellious heart as it thundered on passionate hooves.

Helcyon levered himself up, and Cassie held her breath. Heat rolled off him in waves. The bed shifted with his weight, and her leg brushed his. The contact halted him. Her eyes drifted over the chiseled plane of his abdomen to his chest and up to his eyes.

Don’t look him in the…Oh screw it!

She gazed into those green depths, wanting to drown in them. Her heart pounded furiously from the lack of oxygen, but his lips swooping up to take hers swallowed her gasp for breath.

Cassie groaned, sinking into the kiss. His tongue demanded access, and the reality of it was exquisite. His hands slid down her bare arms, skimming her waist, where two simple scraps of cloth kept him from her skin.
It was too much.

She leaned into the kiss, hands stealing across him, exploring the lines of his chest. His swift indrawn breath when her nails scraped lightly across his nipple emboldened her. Tongues twining, she sprawled across him. His cock pulsed against her belly. He stroked a finger around the edge of her panties and explored beneath the elastic, teasing a gasp from her as that questing finger swirled against her clit.

What the hell am I doing? Her conscience skimmed across her passion-drenched thoughts, but she ignored it. Helcyon tasted divine. She nibbled along the side of his mouth, tongue lapping at the skin. It was hot, salty, and sweet. She gave in to temptation, kissing and sampling along his jaw only to arch upward as his fingers slipped past the waistband of her panties and sank into the wetness soaking the juncture of her thighs.

Her breasts strained against the thin tank top. “Helcyon…” She ached to feel him touching them. Stop. Must stop.

A groan ripped through her at the thought. When his finger thrust inside of her, her sex clenched around it, pleasure pushing her past the point of coherence. “Helcyon, stop.”

He stilled at the rush of words, and Cassie wanted to weep. Her sex squeezed at his fingers, aching to pull more of him inside. Gritting her teeth, Cassie lifted her head and focused on the corner of his cheek. It was safer than looking him in the eyes and less enticing than gazing at his lips.

“We have to stop.” She exhaled the words, hating each one for passing her lips.

“We can if you wish, but we do not have to.” He remained utterly still, her sex impaled on his finger, his hand cupping her mound and his thumb perilously close to her clit.

“Unfortunately, we do. You’re a client, and I don’t—I don’t sleep with clients.” Cassie swallowed against the sob that snuck up on the end of her words.

Beneath her, Helcyon began to shake with laughter. The faint bouncing motion pushed his finger deeper into her. His thumb stroked her sensitive clit. Pleasure exploded behind Cassie’s eyes as her orgasm swept through her. Her nails dug into his arms as the pleasure wrenched from her.
About Heather
Heather Long is a full time writer, mother, friend and student.  She can often be found at 4 a.m. hiding in her garage with a cup of coffee and a new story idea unfolding on her laptop. You can keep up with these and all of Heather’s upcoming releases via her website, Facebook page and occasionally, Twitter although she swears she’s pretty bad at remembering to Tweet even when she reads them.