I can’t believe I’m admitting that. I have this fear that all my previous Heroes in my books are going to be shouting: “HEY! What is THAT supposed to mean?” and then seek revenge. After all, I’ve always sworn there’s nothing sexier than a Cat or Wolf Shapeshifter. Every Alpha male I’ve created is the very embodiment of sexy, primal shifter. If you’d asked me a few months ago, I would have said that nothing could beat a cat or wolf shifter.

That is, until the Dragons came along. Whoa. Those sexy, unique, incredibly multifaceted Shapeshifters just stole the hearts right out of Readers — me included. Let’s face it: what’s NOT to like about them? They can FLY! Most of them have inborn Magick. Most breathe fire. They’re bigger, tougher! When faced with a werewolf on a full moon night and a dragon ready to eat —I’d run from the dragon! LOL!

The Wikipedia describes Dragons as:

“Dragons are usually shown in modern times with a body like a huge lizard, or a snake with two pairs of lizard-type legs, and able to emit fire from their mouths. The European dragon has bat-type wings growing from its back. A dragon-like creature with no front legs is known as a wyvern. Following discovery of how pterosaurs walked on the ground, some dragons have been portrayed without front legs and using the wings as front legs pterosaur-fashion when on the ground.

Although dragons occur in many legends around the world, different cultures have varying stories about monsters that have been grouped together under the dragon label. Some dragons are said to breathe fire or to be poisonous, such as in the poem Beowulf.[2] They are commonly portrayed as serpentine or reptilian, hatching from eggs and possessing typically scaly or feathered bodies. They are sometimes portrayed as having especially large eyes or watching treasure very diligently, a feature that is the origin of the word dragon (Greek drakeîn meaning “to see clearly”).[3] Some myths portray them with a row of dorsal spines. European dragons are more often winged, while Chinese dragons resemble large snakes. Dragons can have a variable number of legs: none, two, four, or more when it comes to early European literature.
Dragons are often held to have major spiritual significance in various religions and cultures around the world. In many Asian cultures dragons were, and in some cultures still are, revered as representative of the primal forces of nature, religion and the universe. They are associated with wisdom—often said to be wiser than humans—and longevity. They are commonly said to possess some form of magic or other supernatural power, and are often associated with wells, rain, and rivers. In some cultures, they are also said to be capable of human speech. In some traditions dragons are said to have taught humans to talk.”
THAT’s alot to think about!
In my latest book, SURRENDER HER TOUCH, my hero is a Dragon Shapeshifter. Sexy. Alpha. Ready to kill to defend his Clan and the woman he loves. If you’d like a couple of pages (FREE), just write me and state the page numbers (up to four pages): authorkari@yahoo.com 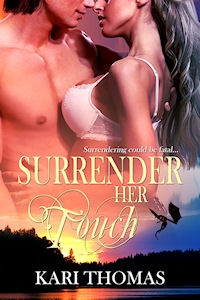 Surrendering could be fatal…
Surrendering her touch could be fatal…; will she chose her own life over the lives of her enemies? When a shocking truth uncovers secrets from her past, Summer is faced with life or death situations. Should she accept what has been revealed and give of her healing power to the very dragon shapeshifters who destroyed her family — or should she run as fast and as far as she can? And what about the too-sexy-for-his-own-good dragon shifter who has stolen her heart and soul –the very man who will not let her say ‘No’ to her deadly destiny? If she surrenders, will she lose more than just her heart and soul? Will the shifter she loves stand by and let her sacrifice everything?

Summer Althea has lived her life in secrecy. But Fate had plans for her. When she’s targeted by a mysterious serial killer, her past suddenly comes back to haunt her. Dragon shapeshifters are real. And she is one Clan’s bonded ‘Healer’. The dragon shapeshifter protecting her won’t take no for an answer when she’s needed to heal the Clan’s Ruler –even if it means she’s forced to face her nightmare and find a way to survive it –without his help. Slade Stryker has one priority and that’s to protect his dragon clan from exposure to the modern world. When Summer’s heritage is revealed and she’s needed to save the clan’s aging ruler, Slade won’t let anything stand in his way to make sure Summer surrenders her healing touch. Falling for her wasn’t an option. Too bad his dragon self recognized his mate immediately. But Slade knows one thing: Summer will never fall in love with a dragon shifter; she’d rather die first. Unfortunately, before the danger surrounding them is fully exposed, death for either of them is a very real possibility.

So…tell me. What do you think of this new oh-so-popular Hero, the Dragon Shifter? While you’re answering, I have to go calm down my other heroes. It’s not a pretty sight: I have 3 Cat Shifters, 1 Wolf Shifter, 1 Angel-Demon, Alpha males plotting revenge on me for this tribute to the Dragon.
HAPPY READING!
Kari
www.authorkari.com