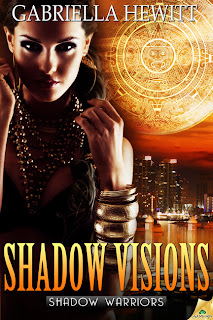 Writing is never easy, but in a paranormal romance, there is the extra aspect of world building. While SHADOW VISIONS is a contemporary story, it weaves Aztec mythology and culture into the plot making for a rich storytelling experience.
Aztec mythology isn’t as well known as the Greek, Roman or even Norse myths. Although people may be familiar with Huitzilopochtli, the Aztec sun god, they probably have never heard of Ehecatl, god of the wind. Aztec names are not the easiest to pronounce, are they? 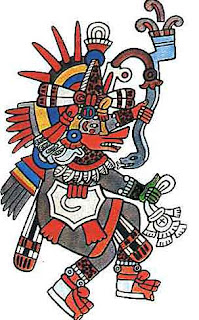 The wind god plays an important role in this story. In the Aztec creation myth, when the fourth sun was destroyed, the gods gathered to decide what to do. Two gods jumped into a sacrificial fire. One became the sun and the other the moon. However, it wasn’t until Ehecatl blew on them that they were able to move. Thus, his other name is Yohualli Ehecatl, the One Who Moves Matter in the Universe. In fact, it is said that Ehecatl has no corporeal form.
There is another myth attached to Ehecatl. It is one of love and passion and tragedy. There is a goddess called Itzpapaloti who was feared greatly by the Aztecs. It was said that she wore a necklace of human hearts, and during a solar eclipse, when the moon swallowed the sun, the goddess would come down and devour all humanity. Now, Itzpapaloti had a mortal granddaughter named Mayahuel, a beautiful young maiden that she kept hidden in the farthest corners of the universe. Mayahuel was lonely and longed for companionship. One day, Mayahuel felt the caress of the wind god and became enchanted. Every night the wind god would visit the young maiden and transport her to different parts of the universe. Within the wind’s embrace the two lovers became one. However, Itzpapaloti discovered the two were meeting and became enraged. She sent her tzitzimime,celestial demons, out to search for them. 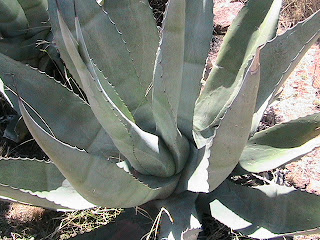 Mayahuel and Ehecatl embraced and combined to form a plant. One side became the feminine side and the other the masculine side. The plant took root in the desert, where it stood solitary and proud. The tzitzimime discovered the hiding place of the lovers and broke off the branch of Mayahuel, tearing it into pieces. After they left, Ehecatl became the wind once more. He grieved for his lost love and buried the pieces. At that spot grew the first maguey plant. It is from this plant that they syrup agave is produced, not to mention Pulque, a favorite alcoholic beverage of the gods.
Researching Aztec myths is fascinating. Threading them into my shadow warrior tales has been fun and challenging. I’ll leave you with a blurb and an excerpt from my first shadow warriors novella, OUT OF THE SHADOWS. I hope you enjoy it. Don’t forget to stay tuned for the next installment, SHADOW VISIONS, coming very soon!
You can always find out what I am up to by visiting my website at www.GabriellaHewitt.com. Check out my other series and my free recipe booklets.
In celebration of the 2ndbook in the SHADOW WARRIOR series, I am holding a contest. Anyone who comments in this post will be eligible to win a copy of my first Shadow Warriors novella, OUT OF THE SHADOWS.In your comment, please put your email address, so that I can contact the winner. 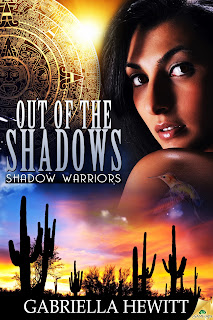 EBOOK Order
Available everywhere ebooks are sold
Book One – OUT OF THE SHADOWS
When the last shadow warrior falls, so will all humanity.
With each demon he vanquishes in service to the Aztec sun god, Tomás fulfills his duty to defend humankind—and surrenders another piece of his humanity to his wolf spirit. All hope seems lost until a mission leads him to the door of the one thing he thought he’d never find…his spirit mate. The only woman who can save him from oblivion.
When Carolina hears the wolf’s howl, it pierces the very core of her lonely heart. Yet she dare not answer. As the last guardian of her land and the secret it contains, she is haunted by the mistake that cost the lives of her family. Never will she repeat that mistake, especially with a warrior who is more beast than man.
Chasing away the demon is easier than breaching the barriers around the heart of the young woman who possesses a strange power over water—and his very soul. But if they are to survive the night, he must convince her they are destined to stand together.


***EXCERPT***
A wolf’s howl pierced the desert silence, causing the animals to stir restlessly in their stalls. Wolves had been reintroduced into Arizona, but she had yet to see or hear one so close to her ranch. Was it an omen?
Carolina paused in her chores to stare out the open barn door into the gathering darkness.
For a moment, she let herself get caught up in the long, solitary note. It felt like a kindred spirit. She knew loneliness intimately. Only her loneliness did not come from the vast miles of the sun-parched Sonoran desert that surrounded her, but out of the necessity to protect her goddess, her land’s secret. As one of the few amongst her people to become a guardian, her choices were limited.
The one occasion she’d invested herself in another, he’d betrayed her. She’d foolishly placed her hope and trust in Billy and she’d paid a horrendous price. Her desire to find someone to share the workload, her joy and sadness, and the burden of her secret—just as her parents had done—had blinded her to the trap she’d walked into. By the time she understood what was happening, it was too late. Her parents were dead.
Her heart weighed heavy in her chest as if it had happened recently and not five years ago. The memory of her parents lingered too close to the surface today. This had been their land, their dream, and now it was hers to fight for. She’d vowed never to fail them again. Above her own needs came the higher purpose of protecting her goddess at all costs.
Her mare, Mariposa, snorted and reared up, pulling Carolina from her thoughts. The animals had been growing edgier with each passing minute. They sensed the evil that blew in with the warm desert breeze. She berated herself for not paying more attention to them.

Goose bumps prickled her skin. Her tattoo, a gift from the goddess, began a slow burn on her shoulder, a sure sign that evil was approaching. She felt the heat radiating through the fabric of her denim shirt. The last time she’d experienced the odd sensation, her world had fallen apart.
Cautiously, she turned her head, seeking the source.
Her breath came out in a gasp.
Less than ten feet away sat a magnificent gray wolf, watching her. Waiting.