Guest Post & Giveaway: Hailey Edwards - Melissa Schroeder
Will Write For…
Although writing is its own reward, sometimes a girl gets a little tired of meeting that daily write goal. Everyone needs a push now and again, and once I heard about my friend Sasha’s reward program, I was ready to sign on the dotted line.
Sasha and I have a thing about nail polish—we buy it like it’s going out of style. Her reward program is simple. As new polishes are released that tickle our fancies, we make notes of the ones we want most. Instead of indulging in an impulse buy, we hold firm until we’ve accomplished something writing-wise that earns us our polish of choice.
While this program is tailored to maximize our rewards…it also maximizes our motivation.
One new bottle of polish for each project finished, and one new bottle of polish for each project submitted. Two bottles for every revision request, two bottles of polish for every contract received, and sometimes up to five bottles per rejection. That last one depends, doesn’t it? Some rejections require more glitter/flaky/duochrome polish to get over than others.
The funny thing is, and it figures my husband would be the one to notice and comment, but it also saves money. Nail polish can be expensive (anywhere from $2 to $20 or more a bottle). Since it takes an average of three to four months for me to produce a novel, he supports the reward program (and months without tiny boxes arriving in the mailbox) wholeheartedly. 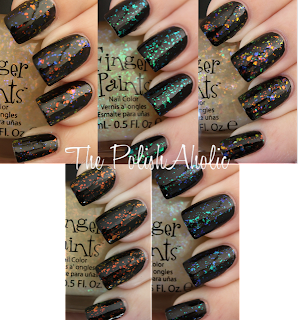 I’m halfway through the first draft of my current work-in-progress and my eyes have already started to wander. I’m thinking if I hoard all those rewards, I ought to have enough points saved upon completion of this manuscript to purchase the full set of five flaky polishes by Finger Paints. Much like shiny new story ideas, I fall victim to the temptation of flashy polishes.
But, as much as I love all things sparkly, I’m afraid my characters prefer getting their hands dirty. Emma, the heroine in my newest release, Evermine, never wears polish, makeup, gowns or jewelry by choice. She does, however, have beautiful lavender tattoos covering her entire body. While the effect is lovely, the tattoos serve as a reminder of who she was, what she was, and that the only male she’d ever loved risked his life to make her all she could be. 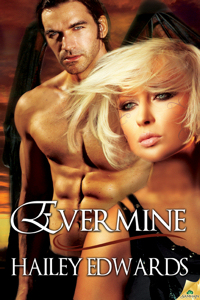 He can be a slave to his past…or allow her love to free him.
There’s such a thing as too much change. Emma’s sister is mated. Revolution is brewing in her home realm. The last straw: her would-be mate is back from the dead and back under her skin—yet when it comes to the last five years, he’s not talking.
Desperate for a chance to start her own life, she answers the queen’s call to ensure equality for all of Askara’s newly freed slaves. It’s the perfect opportunity to escape a heartbreak in the making named Harper.
Harper loses a piece of his fractured soul when Emma walks away. His lies were meant to protect her from torturous years that drove him to the point of madness. Instead, when he comes to her a year later to help avert a crisis in a freed-slave community, the wedge those lies drove between them is firmly in place.
As their new lives collide with old wounds, they race to stop a threat that could not only destroy the queen, but send Harper back to the hell he escaped. Emma must decide if the man she still loves deserves equal rights to her heart.
Warning: This title contains torn pants, ripped gowns, and sand in uncomfortable places. It also includes one overcompensating villain, one gnarly priest, and two battered hearts willing to give this thing called love one last chance.
Click here to read an excerpt from Evermine. Click here for more information on my upcoming releases, including the third book in the Daughters of Askara series, Eversworn.
In celebration of Evermine’s release, I’m giving away one digital copy of Everlong and one digital copy of Evermine to one lucky visitor. Leave a comment below on your favorite impulse buy or your favorite writing reward, and you’ll be entered for a chance to win!
Contest ends on 2-26!