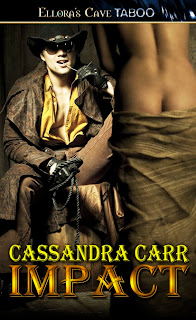 Impact
Cassandra Carr
Book one in the Buckin’ Bull Riders series.
Professional bull rider Conner Raub hides a secret from the world. He’s a Dom. When he meets a submissive on tour who pulls at his Dom tendencies, he fights to deny his true self, believing his colleagues will condemn his lifestyle.
Jessica Talbot is new to the BDSM scene and the bull riding tour, but after seeing Conner come to the aid of a submissive being mistreated in a club, she sets out to have him for her own. After their first night together she asks him to train her to submit and he refuses, afraid to mix business with pleasure. But Jessica isn’t deterred. She’ll do whatever it takes to make him realize he can have it all—a career, true love and the BDSM lifestyle he craves.
Researching bull riding: it’s a hard-knock life
by Cassandra Carr
When I set out to write this bull rider series (Bk 1, IMPACT, released yesterday), I didn’t know a whole lot about bull riding. I’d seen snatches of it on TV and had read a couple of other romance writers who had released stories with bull rider heroes, but neither of those things was nearly enough to write an entire series based on that world. 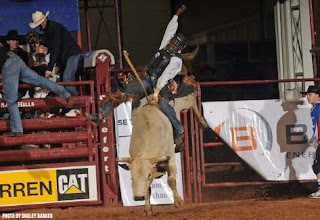 So what did I do? Research! And boy, was it tough. Do you believe me?!?
After all, I had to comb through the websites for the PBR (Professional Bull Riders tour) and the PRCA (Professional Rodeo Cowboys Association). I had to watch PBR on what’s now NBC Sports (Versus at the time) and NBC. Yes, bull riding is a big enough sport that NBC carries it…I also had to talk to bull riders, look at tons of pictures, watch videos…In short, I had to immerse myself into the world as much as possible.
No one feels sorry for me? Yeah, I don’t blame you. 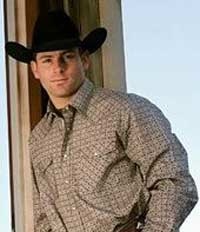 I didn’t base Conner, the hero of IMPACT, on an actual bull rider because I couldn’t find someone who matched the picture in my head. Brady, the hero from book 2, COLLISION, is another story. Brendon Clark is a professional bull rider from Australia. Even better – he’s smokin’ hot. Check out the picture!
The other picture in the post is one of the young guys in what’s essentially the minor leagues of the bull riding tour. This kid is 21 and eats, sleeps, and breathes bull riding. Most of the young riders are like that- you have to be if you want to make it in the highly-competitive world of professional bull riding.
What questions do you have about bull riding? I’m not an expert but I’ll do the best I can to answer them. One commenter will win a set of Romance Trading Cards from IMPACT, so be sure to leave your email address!
BIO:
Cassandra Carr is a multi-published erotic romance writer with Ellora’s Cave, Siren, and Loose Id who lives in Western New York with her husband, Inspiration, and her daughter, Too Cute for Words. When not writing she enjoys watching hockey and hanging out on Twitter.
For more information about Cassandra, check out her Website at, “like” her Facebook fan page or follow her on Twitter.
BUY LINK:
IMPACT