Last month, Avon did a big push for Ovarian Cancer Awareness. They released seven historical books including some of my favorite authors. Here is the verbage from their website:
September is National Ovarian Cancer Awareness month, and Avon Books is urging our authors and readers to learn about the symptoms of ovarian cancer, and to help spread the “K.I.S.S. and Teal” message. Avon Books has made an initial donation of $25,000 to the Alliance. And—with your help—Avon Books has also committed to donating 25¢ from the sale of each book, physical and eBook, in the “K.I.S.S. and Teal” promotion between 8/30/2011 and 2/28/2012, up to an additional $25,000 toward programs that support ovarian cancer patients and their families. So, help us spread the word (you can download an ad for your website or blog here) and reach our goal of $50,000 which will benefit all the women in our lives.

Also, you can make a personal donation to the foundation by clicking here.

I am going to be giving away all seven books in print along with The Accidental Countess and Lessons in Seduction signed by me and a necklace: 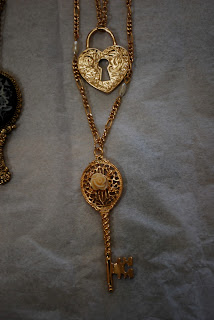 What do you have to do? Read the blurbs for the books, and then meet me down at the bottom for the question. Answer the question and get your name in the bag for the big old prize. I will be drawing a name using Random.org Monday at noon, central US time!

You are cordially invited to the wedding of Miss Heather Cynster … but not before she encounters kidnappers, danger, and a daring rescue at the hands of Viscount Breckenridge

Determined to hunt down her very own hero, one who will sweep her off her feet and into wedded bliss, and despairing of finding him in London’s staid ballrooms, Heather Cynster steps out of her safe world and boldly attends a racy soiree.
But her promising hunt is ruined by the supremely interfering Viscount Breckenridge, who whisks her out of scandal—and straight into danger, when a mysterious enemy seizes her, bundles her into a coach, and conveys her out of London.
Now it’s up to the notorious Breckenridge to prove himself the hero she’s been searching for all along …
Order the Physical Book

A beautiful thief has stolen the heart of the one man in London whose secrets are as dangerous as her own …
Shrewd and wily, pickpocket Temperance Smith needs no man’s favor to survive on London’s unforgiving streets—even when she’s caught red-handed by an officer of the hated dragoons.
On leave from India to find a proper bride in London, Captain Miles Trevelyan is easy prey for a seasoned pickpocket like Temperance. But when the dazzling thief steals first his wallet, then his heart, his pursuit throws them into a deadly world of treason and betrayal that will force them to question everything they know about love, loyalty, and desire. For there can be no middle ground for these two stormy-tempered Scorpios entangled in the star-crossed romance that threatens to destroy them both.
Order the Physical Book

Miss Octavia Pierce is witty, well-off … and shockingly unwed. Still, she is far too successful in society to remain on the shelf forever, and her family has hopes that Octavia will finally make the perfect match. What they don’t know is that, years earlier, Octavia was scandalously tempted by the one man capable of sweeping her off her feet— the man now known as the Marquess of Doreé.
A third son, never meant to inherit, Lord Ben Doreé has abandoned his past and grown accustomed to his illustrious new position of wealth and power. But he has never forgotten Octavia, and now she desperately needs his help in a most dangerous, clandestine matter. Although she claims she has put the memories of the passion they shared behind her, Ben is determined to once again have her in his arms—and in his bed.
Order the Physical Book

Welcome to Spindle Cove, where the ladies with delicate constitutions come for the sea air, and men in their prime are … nowhere to be found.

Or are they?
Spindle Cove is the destination of choice for certain types of well-bred young ladies: the painfully shy, young wives disenchanted with matrimony, and young girls too enchanted with the wrong men; it is a haven for those who live there.
Victor Bramwell, the new Earl of Rycliff, knows he doesn’t belong here. So far as he can tell, there’s nothing in this place but spinsters … and sheep. But he has no choice, he has orders to gather a militia. It’s a simple mission, made complicated by the spirited, exquisite Susanna Finch—a woman who is determined to save her personal utopia from the invasion of Bram’s makeshift army.
Susanna has no use for aggravating men; Bram has sworn off interfering women. The scene is set for an epic battle…but who can be named the winner when both have so much to lose?
Order the Physical Book

A bargain that was all business … and pure passion.


Neither wealth nor beauty will help Lady Francesca Gordon win custody of her young niece Georgina, saving the girl from a cruel stepmother; she needs London’s top solicitor for that. But when Edward de Lacey, son of the powerful Duke of Durham, hires away the one man who can do the job, Francesca decides Edward himself must champion her case … if only she can melt the dashing lord’s stony heart.

Edward has reason to be guarded, though. London’s tabloids have just exposed a secret that could ruin his entire family. When Francesca offers a unique chance to undo the damage, Edward is forced to agree to a partnership … and now, each moment together feeds the flames of his scandalous longing for the passionate widow. But when Georgina disappears, fate will test them both … and leave their love hanging in the balance.

Lady Corinne, rebellious daughter of the duke of Banfield, refuses to marry Lord Freddie Sherwin. Yes, he’s the catch of the Season and the man her father chose for her. He’s also the most despicable male of her acquaintance. With her wedding only weeks away, she flees and finds herself a prisoner of the notorious Thorn!
Who says the devil isn’t a woman?
The rich and powerful tremble at the highwayman’s name, while England’s villagers rejoice in his bold exploits. His identity is a secret; his life a mystery—until Lady Corinne tumbles into his arms. If the Thorn wants her silence, he must hide her until her wedding day passes. It’s a devil’s bargain and one that can only lead to a hangman’s noose.
Corinne believes it the perfect plan—until her highwayman reveals a passionate lover’s heart, and she realizes that in the seduction of scandal, she may have found the hero she’s been waiting for her whole life.
Order the Physical Book

HERE IS THE QUESTION:
What is your favorite backdrop for a story? Do you like to escape to the Highlands and spend time with kilt wearing warriors, spend time with sexy military men in our modern world, or fight aliens on other planets? Or something else entirely? Just let me know and you get your name in that bag for the BIG PRIZE!

24 Comments on “Kiss and Teal-the giveaway”