Next up is Rachel Cron. 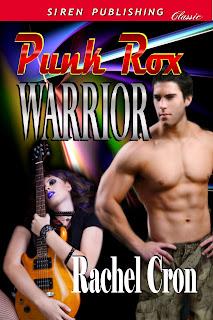 Rainne Stanton is a young woman who lives her life by her own rules. She has her band, she has her little business, and now she has a stalker. James Decker is competent, lethal, and Rainne Stanton’s new shadow, but he never anticipated what was waiting for him.

With a crooked eyebrow, she mocked him from across the table. “I am capable enough to feed myself.” She snorted. Look at him, she thought, smug, the opposite of what she went for in a guy. She liked her men with hair to match her rainbow lipsticks. A boy she could share belts with. He was seeping testosterone, almost choking her. It repulsed her that she couldn’t get the smell of him out of her head. When he had grabbed her in the hall, he’d been so close. His scent assaulted her. Pure male. She felt her face flush just thinking about it. She felt like a stupid little girl in his presence. She saw how he scoffed at her apartment, her blood red walls and her colorful furniture. Her head told her he was too serious. He probably liked skinny blonde bimbos with fake boobs and fake personalities. Her head beat at her from the inside, not for you! Yet when he walked near her, her body told her he was exactly what she needed, and so much more if the bulge he had in his pants in the hall was any indication. I wonder what would he taste like?
Leaping from her chair and grabbing their plates, she headed for the sink and vigorously started washing them. She had to pull her shit together. Not good, my p p ussy is leaking like a faucet. Why, she asked herself. She had to get these thoughts out of her head. She wasn’t a doormat for men. She refused to be weak and start acting like those little country club girls her mom had been trying to turn her into for the last thirty years.
“You okay? You seem kind of jumpy?”
“Fine!” she snapped. “I’m just not comfortable sharing pleasantries with one of my mother’s spies!” Slamming the sponge down into the water, she scurried to her room, and locking the door behind her, she sank to the floor. Bringing her knees to her chest, she wondered what the hell she was going to do. She had to get out of here. Grabbing the closest pair of jeans and yanking them on, she laced up her green Doc Martens, jerked a hoodie off her door, and climbed out the bedroom window and down the fire escape.
*****
“What the hell was that all about?” he muttered under his breath. Still sitting in his chair at the table, he could do nothing but shake his head as he slowly raised himself from his seat. Very slowly. The steel rod bulging under his jeans was making it impossible to move comfortably. This was his worst nightmare. Her mother had been very specific with her instructions. She made it very clear he was not to fuck her, not to let her engage in any destructive behavior, and not to let her out of his sight. They were to find the ex-boyfriend and turn him over to the authorities for the assault. Her mother had been adamant that she would throw herself at him. She had done just the opposite, even though it had been obvious to him that she wanted to do just that. He could practically smell the cream dripping from her cunt. It was mixed with a hint of peaches. He’d always been partial to the scent of peaches. Nothing about this case was adding up. He’d found none of what the mother claimed. In any case, he’d let her chill out and then check on her before he headed to bed, giving him some time to get his body under control.
He’d seen a lot of things throughout his life, growing up in the mountains of upstate New York and married to the military since he was old enough to join. He was a soldier, a hunter, and tracker. He’d never seen anything like these cartoony, skeletal animals she had scattered around. When he asked her about them, all she had to say was, “Even dead animals need love.” She was different all right. Her apartment was different, dark yet with splashes of color. It was obvious she lived alone and liked it that way, yet scattered far and wide there were letters, pictures, postcards, and other tokens that hinted that she was welcomed and well-liked by the people who shared her strange little piece of the world.
After he cleaned up the kitchen, he made a lap around the large studio apartment, cleaning and straightening as he went. He took the time to study her things, get a feel for her life, rummage through her filing cabinet and computer files. After a few hours, it was nearing midnight. He had to check in with the boss lady in the a.m. It was time to hit the sack.
The knock at her bedroom door went unanswered. “Rainne, if you’re in there, you need to answer me.” Nothing. “Rainne!” His voice rising to a commanding level. He figured if she was going to act like a child, she would be treated as such. “Open this door or you will be forced to replace it when I rip it from its hinges!” Nothing.
A split second later he surged into the room boot first as the door splintered into three pieces. Immediately, he knew she had left. “Fuck!” Darting around the corner and returning a half second later holstering his firearm, he threw on his bomber jacket and flung himself down the fire escape. He figured she had a pretty hefty lead on him, but he loved to track his prey. He’d find her.