Next up is Kate Hill! 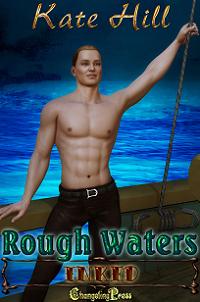 One moment Samantha is admiring a tattooed man at the gym and the next she’s
aboard a private yacht with no idea how she got there.

Faced with two mysterious men–one she trusts and one she fears–she experiences
mind-blowing sex with a vampire while avoiding death on what turns out to be a
brutal party for the criminally insane.

Lured onto his estranged creator’s yacht, Geoffrey meets a woman whom he can’t
resist, but is Samantha part of a scheme to tempt him into indulging in his
long-repressed bloodlust?

Excerpt
“I don’t know what’s going on, but–” The shipped rocked violently and Samantha
stopped speaking and focused on keeping her balance. It was impossible. Once
again they lurched on the waves. She tumbled onto Geoffrey who landed flat on
his back, Samantha on top of him.

Instinctively her thighs clasped him. Straddling him, she braced her hands
against his chest. Their startled gazes locked.

“What’s going on?” she asked breathlessly.

“Feels like a storm to me,” he said, grasping her waist.

The shipped tossed again and Samantha let go of a little shriek at the same
moment Geoffrey gave a masculine shout. They rolled across the floor and landed
with their positions reversed. Geoffrey’s long, hard body pinned hers to the
carpeted floor.

Bracing a hand on either side of her head, he raised himself slightly, relieving
her of a portion of his weight.

“Something isn’t right here,” he said gruffly, his lips centimeters from her.
“It feels like we’re in the middle of a typhoon but all I want to do is fuck
you. What did John do?”

Again they tumbled across the floor. This time she landed on top.

“How should I know?” she panted, torn between fear of the ship sinking and the
most intense arousal she’d ever felt in her life. “He’s your family, not mine!”

The ship rocked so hard she thought for sure they’d capsize. She screamed and
Geoffrey’s arms tightened around her as they rolled again. Before they struck
the wall he managed to turn his body so that he took the brunt of the blow. He
grunted on impact.

“You okay?” she asked. Why did she care?

“I think so, but I’m not sure it matters. Do you think we’re sinking?”

They stood, steadying each other.

“We better find out what’s going on,” he said, taking her hand.

Instead of pulling away she clung to him. No sooner had he opened the door than
John appeared drenched in seawater and looking disheveled. He pushed tendrils of
black hair from his forehead.

“Are we going down?” Geoffrey asked.

John shook his head. “No, but we’re off course and our communications have been
knocked out.”

“The captain has everything under control. We lost a couple of guests overboard,
but it’s no big deal.”

Samantha stared at him in horror.

“Don’t looked so worried. They won’t be missed,” John told her, a wicked grin on
his full lips.

Geoffrey glanced at Samantha and said, “We’re probably better off without them.
Believe me, this isn’t a group you want to be lost at sea with.”

“We can keep her safe. Right, Geoffrey?” John said.

The men held each other’s gazes–John with an antagonizing smirk and Geoffrey
with his jaw set in anger.

“No, John, you need to tell me what the fuck is going on.” Geoffrey grabbed his
arm and pulled him into the cabin.

~~~~~~~~
Up for grabs is a PDF of Wild Woods.  Kate wants to know what your favorite paranormal creature is. Tells us in the comments.