ATH: Nina Pierce - Melissa Schroeder
Next up is Nina Pierce. I love the opposites attract books.  I LOVE contemporary as many of you know and this is definitely on my TBR pile. I also share a love of the state of Maine. I fell in love with it last summer and I still have a super lusty crush on it.
She is giving away a Amazon 15 dollar GC from AMAZON.
Catch Nina on the Web:
WEBSITE
TWITTER
FACEBOOK
BLIND LOVE
KINDLE
NOOK
SMASHWORDS 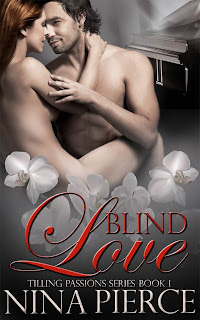 He’s a shock jock looking to reform. She’s an accountant hoping to cut loose. Can love open their eyes to forever?
Uptight CPA and oldest sister, JULIE TILLING, is the glue that binds her family. Everyone depends on her to do the right thing. When her friend from high school dies and Julie is the only one who believes he didn’t commit suicide, she takes it upon herself to investigate his death.

DAMON COREY didn’t come to Maine to become a shock jock. But when his dream career of becoming a concert pianist seems unobtainable, the radio station’s offer is too good to pass up. When mysterious brunette Jewel, hooks up with him at the night club run by a college frat brother, their one night fling wraps around his heart and makes him believe in love at first sight.

But can Damon expose his inner soul without pushing Julie away or will his enigmatic shock jock persona become Julie’s sexual undoing and reveal him as the missing piece that solves the puzzling questions surrounding her friend’s death?

Excerpt:
“You ever ride a motorcycle, Julie?”
She pulled off the helmet and fluffed her hair. The corkscrew curls of copper fit her cute features much better than the black wig that had overpowered them.
“Not one this fast,”
He bit back a smile. “No, I meant any motorcycle.”
“Was it that obvious?” Color rose from her chest and deepened her already flushed cheeks.
“I like to be a woman’s first.” Shit. Even clean shaven and wearing his glasses, Demon’s persona had a bad habit of popping up at inopportune moments.
Julie stopped contemplating her toes and stared straight at him. Emotions moved over her face and clouded her eyes, but he didn’t know her well enough to read between the lines. He’d just met this wonderful woman. He hadn’t intended to scare her off.
“Julie, I—”
“No, Damon. You don’t have to apologize. I get it.”
He hadn’t thought her cheeks could become redder, but he was wrong.
“You have a lot of women available to you,” she said, quietly. “I’m sure they’re much more experienced than me.” She shrugged and fiddled with the strap of the helmet. “I’m sure you realize I don’t usually let go the way I did last night. And I know you weren’t really expecting the person you found at the family homestead?” She emphasized the last two words as if they were obscenities. “The Jewel of last night was more your speed. I get that.”
Oh, hell no. “No, Julie, I—”
Her hand flew up between them. “No, Damon, seriously, you don’t owe me anything. Obviously my father dragged you into an uncomfortable situation. Well, you’ve done your social obligation. I’m home safe and sound. I didn’t mean to disappoint, but I have a hard time living up to everyone’s expectations of who I should be. So, thanks. I get it. Good night.” The helmet landed in his lap.
“No, Julie, really, you don’t understand.” He yelled at her retreating back. “Julie, wait.” Damon attempted to jump from the bike, but the stand wasn’t down, and he had to juggle the extra helmet. “Damn it all to hell. Julie…” He finally managed to extricate himself from the bike and the helmets and caught her just as she pushed open the front door. “Please. I think you’ve misunderstood. Just give me a minute to explain. Then I’ll leave.”
Her arms knotted across her chest for protection. A wounded heart? He’d have to tread carefully. The emerald eyes shimmering in the waning light telegraphed her pain and embarrassment, but her lips were pursed thin with determination. The woman was a walking enigma. Damon suspected she had no idea how damn sexy she looked standing there, inviting him to explain himself—daring him to breach her defenses.

I loved living in Maine and I thought it was a perfect setting for this series. What’s your favorite spot and do you think it would make a good setting for a book?