Our next author is Kinsey W Holley. I LOVE this cover, have since the first time I saw it. Kinsey has a download of her book, just for you.

Yours, Mine and Howls 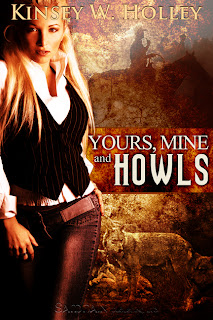 Thirteen years ago, Ally Kendall died defending her young cousin from his werewolf stepfather.
She hasn’t been the same since.
Ally returned from the hereafter with strange new powers, burdened with the secret of why and how she survived. She managed to scrape her life together and raise her cousin, but now he needs a pack to guide him into adulthood. That means pulling up stakes yet again and heading for Colorado to find the only werewolf qualified for the job. A werewolf, she discovers, who tempts her to give up control in a thousand sinful ways.
Cade MacDougall, Alpha of an unrecognized pack, has a tragic history, a sizable ranch, and a daughter who thinks she’s a cat. Time to find a mate? Don’t make him laugh. Until Ally shows up with a smokin’ hot, preternaturally strong body that smells like mine, and introduces him to a nephew who holds the key to unraveling mysteries about Cade’s family—and himself.
But Ally’s holding something back. As Cade’s enemies gather, the cowboy and his secretive new mate must come clean about their mysterious pasts…or else all hope of protecting their newly formed family—and their future—will be lost.