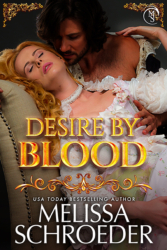 With the release of Anice and The Cursed Clan bundle hitting the lists, I thought we would look at another paranormal series I have available. It’s Throwback Thursday so why don’t we take a look at Desire By Blood, my historical vampire romance.

Before she could puzzle that out or contemplate the oddity of Blackburn’s actions, he slid his hands up her arms, cupped her face, and deepened the kiss. His tongue skimmed over her lips. She gasped, and he used the moment to dip inside of her mouth.

Her head spun, her body rejoiced. Tentatively, she slipped her tongue into his mouth, sliding it along his as he had to her. The taste of him burst through her, tart lemonade, a touch of brandy, and Nicodemus Blackburn…that was the most intoxicating part. Every reservation she had dissolved into the glorious passion he was building,

He growled, the sound vibrating deep in his throat. She shivered at the primal sound. Easily, he walked her backward. Before she could even discern what he was about, she found herself beneath him on the couch. Blackburn tore his mouth from hers only to set about attacking her throat. His tongue slid over her flesh, and the scrape of teeth followed. She heard a moan filled with lustful longing. It took her a moment to realize the wanton sound had come from her.

Her lungs seized the moment she felt his hand move over her breast. For a moment, sanity tried to take hold. She opened her mouth to tell him to stop. This was insane, and again, it could ruin her. Somewhere in the back of her mind a voice told her to resist, to push him away. In the next instant, his thumb moved over her nipple. It responded, tightening immediately, aching for more attention. Again, he growled, a sound that should have shocked her, but it did not. Something in her reacted immediately. An ache tightened her belly then feathered out over her body. A demand for completion battered her, urging her to ignore everything else. She could do nothing but fall into the morass of lust he was creating.