Book 1 in the Mafia Sisters Series 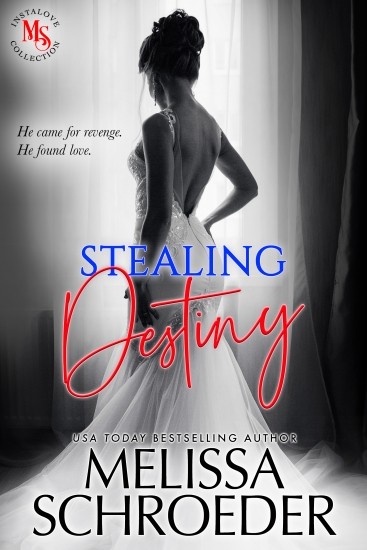 I never wanted to be a Mafia Princess, and I definitely don’t want to marry the gross old Mafia boss. Only, my father insists, and now that my sister has gone missing, I am the only daughter left. The only thing I can do is escape, wearing a wedding dress, in the middle of the night. Only, while climbing out the window I land on top of the most handsome man I’ve ever laid my eyes on. With no other resources, I beg him for help to find my sister.

I’m at the Petrov estate for one thing: revenge. The man who killed my parents is set to marry one of the Petrov daughters. While casing the Petrov house, one of the daughters falls right into my lap, literally. I know that she’s an innocent, but I don’t care. I will do anything to pay back the mob boss who killed my parents. Only, I didn’t expect to like Destiny, and I definitely didn’t plan on falling in love with her. And once that happens one thing is for certain: I plan on keeping her safe and in my bed, by any means necessary.

Author Note: This is another instalove romance with a former FBI hero who still has a good heart although it’s been bruised a little, a quirky heroine who is ready to be reunited with her sister, and more twists and turns than anyone will expect. As always, the reader will get their Happily Ever After with no cliffhangers.

Book 1 in the Mafia Sisters Series 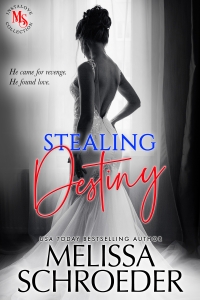 “But, Papa, I don’t understand,” I say as I watch workers shove my items into boxes.

“Your sister has left. She was the one who was supposed to marry Tony. So, he has said he’ll take you.”

“But why are all my things being taken away?”

“Your sister ran away because she could take things with her. You will not have that. And you need to take these things with you when you move to Tony’s house.”

I hide my disgust. Tony Delano was the man my sister was supposed to marry and why we came up with a plan for her to run away. Of course, we didn’t expect him to pick me after that. No one picks me.

“You’re taking all of my clothes, Papa. Am I supposed to get married in my pajamas?”

The slap shouldn’t surprise me, but for some reason, it does. It’s so hard it knocks me back a few feet, causing me to stumble, but I don’t fall. The sting of it brings tears to my eyes, but I refuse to let him see my cry.

And as always, the workers just keep doing their job. It’s normal in this household, and they know intervening would only get them fired—or worse.

“You will wear the dress your sister picked out.”

Just an FYI, my sister picked nothing out. Our stepmother did because she is just as bad as our father. She is okay with selling off her stepdaughters to forge an alliance with the Italian Mob.

He glances at me, and I know he has a plan. I work for him, laundering his money. He takes credit for it, but I’ve been doing it for the last five years thanks to my amazing hacker skills. I have a head for numbers, so that doesn’t hurt either.

“You will continue to do that for me. And you will teach Tony’s people the same thing.”

Oh, that is so not good. Not good at all. Before I can respond to that, Drusilla—okay, that’s not her name, but that’s what we call our stepmother— brings in the monstrosity of a wedding dress. It’s yards and yards of tulle, white, with a beaded bodice, and well, it’s just ugly. It looks like something straight out of an eighties rom-com.

I see one of the workers pick up my laptop, and I want to scream. But I don’t. I hold it all in because my sister Fable and I planned for this. I still hate seeing them manhandle my hardware.

Drusilla says nothing to me as the workers rush out of the room, but she does hang the dress in my closet. It is the one thing visible. I would laugh at the absurdity, but my father would probably backhand me again.

Once we are alone, he walks over to me, and I refuse to cower. He would see it as a weakness, and while he scares me, I will not let him know it.

“Be a good girl, Destiny. This is good for us.”

For them, he means. He doesn’t care that he is selling me off to a man three times my age or that he is a monster. His last two wives have disappeared.

I nod but say nothing else. There is no need. If I protest, I will end up getting a slap or two…or worse. And in the end, I would still have to marry the bastard. He leaves me alone, shutting the door and locking it behind him.

I wait until his footsteps fade, then I collapse on the ground, pulling my knees up to my chest. I knew he would be mad when we got Fable out of here last week, but I thought the wedding would just be called off. I close my eyes and try to combat the tears. It won’t help anything to cry, and I do have a plan. I just didn’t think I would have to do it with my father on the premises. I thought he and Drusilla would just go away, and then I could join my sister.

I brush away the tears and force myself to stand up and get to work. Fable left five days ago, and I have not heard from her. We have a way to contact each other, but at least I know that she’s somewhere my father can’t find her. Once I get out of here, I will make sure to get in contact with her. I glance outside and notice that the sun is almost set. I only have about an hour before I need to get everything in order.

I go to my closet and then kneel to pull up the floorboards. Beneath them is my real laptop, along with a bag of things I want to take with me, including the necklace my mother gave me. She gave Fable the same one, a silver heart with our initials. I was ten, and I didn’t truly understand that she was dying at the time, but my mother did. She had made us promise to take care of each other. And we have. Being fraternal twins made us closer than regular siblings. Growing up with Drusilla—who our father married two weeks after we buried our mother—made us even closer.

And I will find her, but first, I have to figure out how to get out of my room with a locked door and only a window for escape. I’m on the second floor, so it’s going to take some planning. Thankfully, I’m great with plans.

My only problem is clothes. I didn’t think my father would steal all my clothes, so I did not plan for that. It’s cold outside being November in upstate New York, and all I have are my PJs. Not even a bra. I look at the dress again.

Yep, that will keep me warm until I can get away from the house. I glance at the time again and smile. This is going to be child’s play.