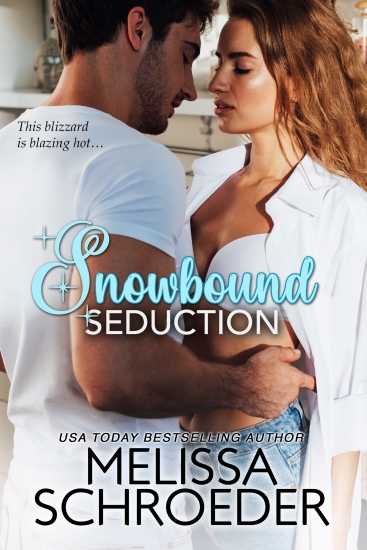 Trevor MacMillian is the tart and incredibly sexy executive chef who’s made pastry chef Elaine Masterson’s life a living hell. But when she catches him in nothing but a tiny little towel, it’s almost enough to make her forget they’re stranded in a luxurious mountain cabin together…or that she hates him almost as much as she craves him like a sinfully forbidden dessert.

Being alone in a romantic secluded cabin might just kill Trevor outright. If Elaine hates him now, how much will she hate him if she finds out he’s been fantasizing about her full, kissable lips? So Trevor argues with her. Makes her angry—until an intense and unexpected kiss turns their hostility into insatiable hunger. And with this much heat, the snowstorm outside doesn’t stand a chance… 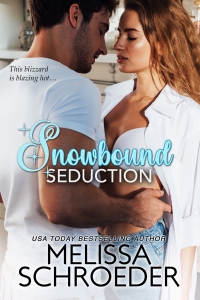 Elaine Masterson studied the Canadian Rockies as they flew by her car window. The jagged snow-covered rocks stood out against the fading sun. Normally, they would take her breath away. She had never been to this area of Canada before, and it was awe inspiring. Any normal person would be entranced with the idyllic scene she was being exposed to. Instead, she wondered if her driver was taking her out to the woods to kill her.

She glanced at the man in question. Harold. It was the only name he gave her. He was probably in his late forties, with long gray hair, a large and very crooked nose, and eyes so small she couldn’t quite discern their color. That was one thing she thought she should know—the color of her killer’s eyes.

She shook that thought away. Her imagination always did get her into trouble. There was no music or talking in the car, and that was another thing that bothered her. Long uncomfortable silences reminded her a little too much of her childhood. She cleared her throat to gain his attention. Harold said nothing. Of course he didn’t. His mind was probably occupied on where to dump her body.

“How much longer?” she asked.

“Just up around the bend here and we’ll be there. We got it all ready for you, as per Mr. McConnell’s instructions.” Great, now Mick was in on the killing. She wouldn’t doubt it. The last few months had been horrible at the restaurant. Mick had warned her and Trevor both he would kill one of them in the end. Now he had sent her to a snowy wasteland to have her whacked. She should have been suspicious when he offered her the cabin for the weekend.

As a girl who grew up in the south, she liked snow. It was so peaceful as it fell. She liked to sit by her window and watch as it landed on the ground without a sound. Her only problem was that even after living in France for a couple years, she didn’t know how to drive in it. Or dress for it. Or deal with it.

“There you go,” Harold said, breaking into her thoughts.

She turned, and her breath caught in her throat. It was the epitome of dream log cabin. It was huge, bigger than she expected, with a floor to ceiling window in the front. Elaine could just imagine the view as the sun rose over the Rockies in the morning. When he parked in the driveway she could only sit and stare.

She shook herself and looked at him. “Sorry. I guess I’m tired from the flight.”

“I’ll help you with your bags.”

Then he jumped out of the SUV. She followed suit and pulled out the keys Mick had given her. As she waited for Harold to retrieve her bags, she glanced around. When he had suggested the trip to the cabin, Elaine had been thrilled. She’d been stressed about work, and she and Trevor had been at each other’s throats the last few weeks.

She sighed as she followed her driver up to the door. Trevor MacMillian was a pretty man. A very pretty man. Okay, not truly pretty because he had a broken nose and an obnoxious personality, but she couldn’t avoid the fact that part of the problem was she was attracted to him. Like wanting to eat him up with a spoon kind of attracted. What added to the problem was that he was an ass.

“Here you go,” her driver said.

She stepped in and sighed again. There was a fire roaring to her right. Off to her left was a pristine kitchen. Mick couldn’t cook, but he made sure there was something fantastic to play with. A Viking cooktop, two ovens, a sub- zero fridge. Lord.

“My number’s by the phone.The storm coming in should just miss us, so you shouldn’t have a problem.”

His weathered face split into a smile. “There’s a big one coming down, but the weatherman is saying we should get an inch or two. Nothing big.” She smiled. “That would paralyze Atlanta.”

“Well, don’t worry. There’s a generator out back. Do you know how to use it?”

She nodded and grabbed her purse to pull out a tip, but he held out his hands. “No, ma’am. Mr. Connelly said everything was his treat.”

She barely had the words out of her mouth when she heard the front door shut. She looked up and found herself alone in the room; the only sound was the wind outside and the crackling of the fire.

She walked around the open space. After she pulled off her jacket and hung it on the back of a chair, she spied a decanter of whiskey. Mick did know what she needed. If there was a storm moving in, her nerves were not going to be able to handle it, not without her favorite crutch.

As she crossed the room, the floor squeaked under her feet. It was weird, but it made her feel more at home. There was something about a wooden floor that always got to her. She poured herself two fingers of whiskey and sipped at it. The warmth of the fire drew her. As she wandered over, her mind went back to work. The idea for the restaurant had been a good one. She knew Mick from her time in New York, and he’d wanted to expand to the south. She might not want to spend time with what little family she had, but the south still pulled at her. Atlanta was perfect for her—a little hot and sticky in the summer and a short winter. It had been hard work, but six months in and they were the most popular new restaurant in the Southeast. If it weren’t for the executive chef, everything would be wonderful.

Trevor Macmillan, English bad boy with a titled father and loads of money, she thought with a sneer. He irritated as much as he attracted her. The duality of her feelings was enough to drive even the most even tempered person insane. Most people didn’t know she had a bad temper. She had spent a huge part of her time in culinary school learning to control it. Now, though, all Trevor had to do was make a small comment, and she lost her good sense. Never before had a man been able to reduce her to that behavior. There were times he made her so crazy she couldn’t remember what she said after screaming at him.

Her number one rule about work was never mixing personal feelings with business dealings. Unfortunately, Trevor made her want to break that rule. There were times she would watch him working in the kitchen, those blue eyes of his concentrated on the dish he was creating. And those hands… He had what people called artist’s hands. Long, lean, sexy—just like that man. She sighed and sipped her whiskey. She had to work out those issues, and then she could deal with him. If she could clear her head of the man, she’d be able to deal with him at work. Time away was exactly what she needed.

“What the bloody hell are you doing here?”

She turned with a gasp, spilling some of her whiskey on her sweater.

Standing on the landing above was her nemesis Trevor. He was frowning at her, his hair still damp, droplets of water slipping down his impressive chest, and all that he wore was a little bitty towel.