Faking it with my Billionaire Boss - Melissa Schroeder

Book 1 in the Faking It Series 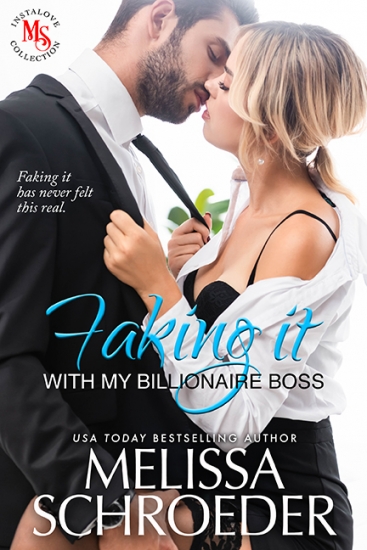 I’ve been infatuated with Silas Prescott for the longest time.

Sure, he doesn’t know I’m alive as he walks past me without looking up from his phone. But, it’s not like I ever thought he would notice me, or anyone else for that matter. All he cares about is work.

That is, until he needs a date and his sister insists I should play his fake girlfriend. And not just for a date, but a whole weekend, staying in the same room, lying to all of their friends and family. But I’m desperately in need of money and I can handle a weekend pretending to be a billionaire’s plaything.

Only…it’s hard to remember it’s only fake when he acts like a possessive jerk, or when he tells me I’m beautiful, or when I’m in his arms.

But I have to remember it’s not real because falling for my fake boyfriend would be a mistake. There is only one thing Silas Prescott cares about and that’s work.

Author Note: This relationship might start out fake, but it doesn’t stay that way for long. Along the way there’s a dressing room incident, dancing, and a Momzilla who wants nothing more than to have her kids happily married. Don’t worry, our hero and heroine get their happily ever after.

Book 1 in the Faking It Series 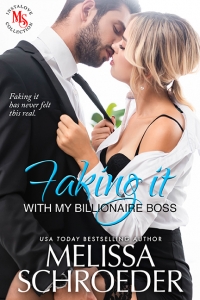 This is going to be a disaster.

I stare at the text from my mother with an impending sense of dread. I know she has something horrible planned.

Momzilla: I made sure Patty is bringing her daughter to the party.

The party is my parents’ thirtieth anniversary celebration and the daughter in question is well…horrible.

It’s not that Rachel Burton is ugly—on the outside. She’s gorgeous. Stunning in fact. The insides…well, she’s cold and nasty and she’s always mean to my sister Hazel. My sister doesn’t tell me, I just know because Hazel, who is bright and happy, always shrinks around Rachel.

My door bursts open, Hazel rushes in, her dark hair flying behind her like she ran all the way from her side of our company’s offices. As usual, she’s dressed to kill, complete with her stiletto heels. She might be tall, but she doesn’t hesitate to wear her three- or four-inch heels. Every time I look at them, my feet hurt.

“What the hell is this?”

She holds up her phone showing my text.

Silas: I’m not going to the party.

I didn’t have to tell her what party, because she figured it out easily. The truth is, I never go to parties. Loud talking, liquor, all that…it’s not my scene. I like quiet nights and work. That’s it. I have always found solace in numbers when other people become too much to deal with. But I was going to go. I have to. I love my parents; I just don’t want to date or marry any of the vapid debutants my mother throws at me. I’m only twenty-eight years old. I have plenty of time to find a wife.

I hold up my phone to show her the message and regret it instantly. The moment she sees our mother’s text, she pales. I really want to ask her what Rachel did to her while they were attending UVA, but I don’t. I have in the past and she avoids answering me. Whatever it was, I know it hurt Hazel so much she won’t share it with me.

“Exactly. I won’t be able to avoid that woman or her horrible daughter.”

“That’s why she invited them to this. Normally, she wouldn’t, but Momzilla wants grandbabies, and she knew you would be at the Darling Resort.”

Our parents booked the massive resort for their anniversary. Milo, the oldest son, is my best friend and suggested it. I might have to kill him.

“Why not you? You’re healthy, gorgeous, you’ll pop out pretty babies.”

Her mouth hangs open and I realize what I said.

“I’m not a baby-making machine, you idiot.”

We frown at each other for a long minute or two. We have always been close for a brother and sister, mainly because there’s only fourteen months between our birthdays.

She sighs and drops down in the chair in front of my desk. “I have an idea.”

“Telling her I’m gay will not work. She’ll just start throwing men at me and make appointments for me at adoption centers.”

“True. But I was thinking that if you had someone in your life already, a girlfriend, that would keep the biaches at bay.”

Irritation rushes through me. “I’m not going to date a woman and call her my girlfriend for this one event.”

I have no female friends. I don’t have many friends because I’m a workaholic. But I definitely don’t know a woman who would do something like this for me.

Her eyes widen at my vehement tone. “What? It would solve your problem.”

“And Momzilla would think she’s a serious girlfriend.”

I have never really had one. I’ve been too busy most of my life, graduating from high school a year early and having my MBA the month after my twenty-first birthday. I knew that I would take my family’s business over and I was okay with it. In fact, that’s all I care about because facts and figures don’t lie.

“Not really, but it would give you a break.”

“She’ll stop nagging, at least for a few months.”

I study her across my massive desk and try to figure out if this is a brilliant idea or madness. With Hazel, it could be a little of both, because that’s the way she lives. Insanity wrapped in brilliance. In other words, she is my exact opposite.

“You know if she thinks I’m settled she’ll start in on you?”

She shakes her head. “She would only do that if you were engaged to be married.”

I think she’s mistaken, but there’s a good chance she’s right. Hazel has always been better at picking up social cues and motivations.

“I can’t do this. What would happen if they found out? I don’t know anyone well enough to trust them.”

“No. Not one of your party girlfriends.”

“I have no idea what you think my life is, but I know someone who would do it for a price.”

I let one eyebrow rise. “I had no idea you hung out with hookers.”

“I don’t hang out with hookers,” she says, her exasperation easy to hear. “This is someone who needs the money and she’s sweet. And best thing is she doesn’t play in our backyard.”

Meaning she isn’t from money. That’s a good point. If my mother knew her family, it would be difficult. She would want to get to know them better or she might want to invite them to the party.

“Don’t say no. I’ll talk to the friend I have in mind, while you think about it. There is a chance she would say no.”

I want to say no, but I know my mother. She has been getting increasingly pushy about grandbabies. It’s like she’s in competition with her friends.

She rolls her eyes. “Of course. Give me a few minutes.”

I nod and watch her hurry out of my office as she texts someone.

This is definitely going to be a disaster. 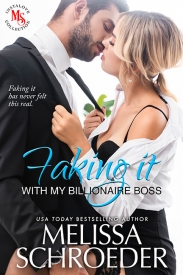 A great wee read to make you feel good about romance and love.

I really liked these two, they were everything you would expect in an insta-love story!

This book was oh so sweet.