Book 1 in the Texas Temptations Series 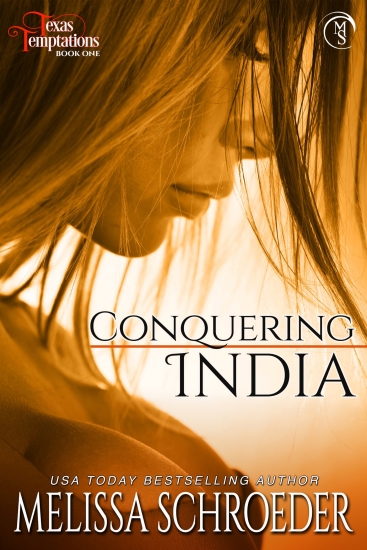 All she wanted was a new start.

Caterer India Singer is getting her life on track, hoping to make it big with her new company. She doesn’t need any distractions…especially a younger man. She won’t get involved with another man destined to leave her. But security expert Wade Thompson won’t take no for an answer.

He knows she’s the one for them.

Wade knows exactly what he wants and just how to get it. He’s pulling out the stops because he’s sure India’s the woman for him and his best friend and business partner, Marc Jasper. Marc isn’t too sure and tries to keep India at arm’s length. When a threat to India has her in constant contact with Marc, the lure of the curvy older woman is too much to ignore. But when both men raise the stakes and ask for more than just a fling, will India play it safe to protect her heart, or will she take another chance on love?

Book 1 in the Texas Temptations Series 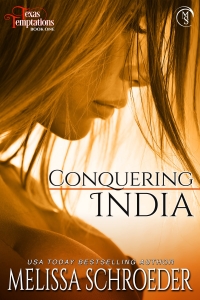 Some days, life didn’t suck. All the traffic lights were green and all the shoes on sale were available in her size.

India Singer pushed the button for the fifth floor and wished this was one of those non-suck days. She’d had pretty bad luck for the last eighteen months, and the car accident she’d had that morning was just the cherry on top of a very big crap sundae.

Of course, once her car had been towed away, it started raining, and without any transportation, she was forced to run five blocks in a downpour. The conservative dress she bought just for this meeting now stuck to her like second skin and highlighted every extra pound. Looking at her distorted reflection in the elevator’s brass plate, she wiped away most of her mascara. The small smudges that remained gave her a delightful raccoon look.

Thankfully, she kept her hair short, so getting it a little wet didn’t matter. It was plastered to her head but with a few finger fluffs, it was passable. Sort of.

When the elevator didn’t move, she glanced at the panel and realized she must have hit “lobby.” She released an aggravated sigh and stepped forward to push the number five button. As she pulled away, a well-built man stepped into the car, almost plowing into her. He drew up short with a laugh.

“Sorry about that.” There was a hint of Southern gentleman in his voice. Not Texan, but the slow, easy accent of someone from Georgia or one of the Carolinas. “Running late as usual.”

“No problem,” she mumbled, trying her best to keep her mind focused on her upcoming pitch. She already sent in the proposal, however this was the final sell. She would kill her best friend Delilah for a chance to land the annual T and J party. Her catering company, India’s Traveling Feast, was gaining more customers by the day, but this would be the olive in the giant martini.

Granted, it was the first “annual” anything by the newly established, rapidly growing security company. Still, she could scoop up more customers at an appreciation party held by a security firm for their clients. And just in time to start pushing fall and winter holiday events.

The amusement in his voice pulled her out of her thoughts. His wide smile held genuine humor. The warmth in his dark chocolate eyes slipped beneath her chilled skin, and she had to fight a shiver. Now that she really looked at him, the man was gorgeous. Not traditional movie star handsome. No, he was better than a Brad Pitt or Hugh Jackman. He was sexy in a downright dirty way. Like he played rough and loved rougher. A strong jaw, full lips, and a slightly crooked nose kept him from being defined as anything but dangerous to her state of mind. His dark locks were in need of a good trim and sported fresh drops of rain, telling her he’d been caught in the downpour, too.

When his smile widened, she realized she’d been staring at him like an idiot. She cleared her throat. “You could say that again.”

The comment pulled a snort and chuckle from her. “I take it you get accused of being a smart-ass on a regular basis, right?”

He gave her a look of mock innocence. “Never.”

His flirtatious manner normally would make her nervous. Instead, she returned his smile. He had to be ten years younger, so there was no way he was seriously flirting with her. It was probably just a way for him to pass the time.

“I find that hard to believe.”

For a moment, she said nothing. Probably because every thought dissolved at the look he sent her way. A wave of delightful heat sped through her veins, heating her chilled body. Yeah, this one had “dangerous to the female psyche” written all over him.

Before she could respond, the elevator door opened, breaking the warmth of the spell he’d created. Her task at hand came rushing back, and her pulse doubled.

With a nod in his direction, she stepped out of the car and into the hallway. She should have been spending time in the elevator preparing. Even though she’d been ready three days ago, mentally reviewing all the key points of her proposal would have been smart after her rattling afternoon.

She saw the number on an office door and realized she was going the wrong direction. With a huff, she turned on her heel and ran into a thick wall of muscle.

“Careful, now.” The same humor laced his voice as he slid his hands to her arms to help steady her.

She looked up at him and repressed a shiver. Goose bumps covered her flesh as his fingers moved over her arm. India cleared her throat, but unfortunately, nothing cleared the image of what the man and his talented fingers could probably do.

“Are you following me?”

He shook his head. “Although, it is a beautiful view to follow.”

Now he was laying it on thick. Still, heat crept up her neck and into her face. “I bet.”

“Since you can’t see it, you can’t judge.” She didn’t miss the deepening of his voice or the way his gaze dipped down to her cleavage.

Tell that to the extra thirty pounds she carried around, largely on her ass.

“What are you doing, sugar?”

She wiggled out of his grasp. “Going the wrong way.” As usual.

With a sigh, she stepped around him and hurried down the hall in the opposite direction.

As she neared the door to the outer office of T and J Security, she realized her friend followed her. She tossed a glance over her shoulder at him. “You know, stalking is a crime in Texas.”

“So is ignoring a beautiful woman.” His gaze swept down to her rear again and then back up to meet hers. “Or it should be.”

Okay, he was definitely flirting with her. She smiled, hoping it looked maternal, knowing she felt anything but maternal toward the man. “That’s very sweet, however I have a big meeting right now.”

“Imagine that,” he said wryly.

She nodded to him again, opened the door, and stepped over the threshold. An older woman with some of the biggest hair India had ever seen—which was saying something being that she had spent her entire life in Texas—sat behind a mahogany desk. The nameplate on the edge of her desk read Judy Reston. She concentrated on her computer, typing like a maniac.

Her no-nonsense voice held no hint of warmth. She didn’t even look up from her work. India stood frozen, stunned by the woman’s rudeness. Before she could say anything, a grunt sounded behind her.

“One of these days, you’ll remember who signs your paychecks, Judy.”

The affectionate aggravation in his voice sent India’s head spinning. She glanced at the flirt and almost jumped out of her skin when she realized he was closer than she expected. Only a few inches separated the two of them.

“What are you doing here?” She whispered.

“He’s being a pain in the ass.” The hard, quick answer from the older woman had India whipping her head around to face her. She was now studying India with a jaundice eye. “Can I help you?”

It took a few seconds for her brain to start working, but the man answered for her, “I believe she’s the four o’clock.”

“Oh, yes, Ms. Singer, Mr. Jasper will be right with you. As you can see, Mr. Thompson has nothing to do. Mr. Jasper had a teleconference that ran over.”

Then she went back to work, ignoring both of them. India slowly turned around and found Wade Thompson grinning at her. India wanted to stomp her foot, or at least curse, but she knew it would have been extremely unprofessional.

“You could have told me.”

His eyes widened. “I didn’t know you were our meeting.”

She raised one eyebrow. “Really?”

“Okay, not in the elevator. It wasn’t until you started down the hallway in this direction that I figured out who you were.”

Oh, she wanted to die. Right there on the spot. If she could figure out a way to disappear, she’d do it.

She called one of the owners of the company a smart ass. Closing her eyes, she tried to pretend that she wasn’t there. Maybe it was all a dream. A big, bad nightmare of how her day could go.

She opened one eye. Mr. Thompson cocked his head and watched her with a curious stare. “Are you all right?”

She would put on her best professional face and find some patience today.

India closed one eye and said, “I can’t believe I called you a smart ass.”

“You wouldn’t be the first,” another male voice remarked from behind her.

India opened her eyes and turned toward the other voice. Standing in the doorway to one of the offices was a tall, lean, blond-headed man who just had to be the ‘J’ as in Mr. Jasper of T and J.

She couldn’t speak, couldn’t come up with anything to say as she watched his mouth curve.

“And I promise you, Ms. Singer, you won’t be the last one to call him that.” 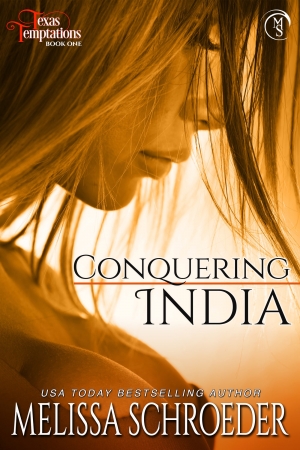