This is one of my favorite military romances. I think it’s because Sam is a brat and she was Deke’s wife at one time. And well, Deke. He’s wonderfully confused most of the time.

Loving a military man isn’t always easy and sometimes living with him is impossible. 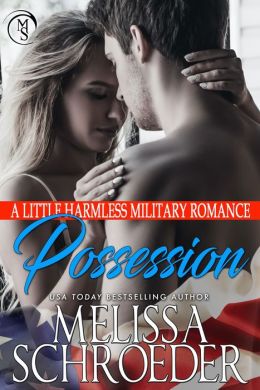 Deke Berg has been in love with Sam for ten years. From the moment they met, they could never keep their hands off each other. Their marriage was volatile and short-lived, and they were both much too young. Now, though, Deke knows what he wants in life, and Sam is at the center of his plans. Unfortunately, Sam is wary of marriage—especially to a man who broke her heart.

Sam has always loved Deke. Being a former military brat, she thought she’d been prepared for life as a military spouse. But the long separations were hard, especially dealing with the stranger who returned home. When he refused to get help, she left and always regretted it. She doesn’t know if she can handle that pain again, but after spending a night together in Hawaii it’s impossible for her to ignore him.

Old prejudices and painful memories aren’t easy to overcome, but there is one thing Deke understands: Sam is the woman for him and he will do anything to prove his love and win her back.

»WARNING: The following book contains: Another hard-headed military man, a woman with a wicked temper, a trip to Hawaii, one Hell Week, a few embarrassing moments, nosey brothers, and two people too stupid to realize they are perfect together. It’s Harmless and military, so for your own safety make sure you have ice water nearby. The author assumes no responsibility for overheating of the reader.

She nodded. “I needed a change. They were cutting our benefits left and right. Pay isn’t great here, but there were still as many benefits as in California. And, seriously, how can you not be happy living with this kind of scenery?”

He shook his head. “You make it sound like it’s paradise every day.”

She chuckled. “No. Just like everywhere else, we have the same issues. But I do like the slower pace here. And you know how I react to long winters.”

He nodded, and she knew he remembered her problem with long winters. “Your friends, do they teach, too?”

“No. Fiona is a message therapist and Zoe is a nurse.”

“Hmm, does Fiona do house calls?”

She laughed. “She does, but I don’t think she would be comfortable with you as a client.”

“She knows a little bit too much about you.”

“What’s that supposed to mean?” she asked, feeling more comfortable now. The vibrations between them were still there, but it was easier to concentrate on catching up.

“You tell each other way too much about your sex life.”

She stopped and pulled her arm out of his. “Like you don’t brag about your conquests to the boys? You just said Mal talked about his women.”

“First of all, my friends aren’t boys. Mal doesn’t count. And second of all, I never brag. Especially when comparing any woman to you is useless.”

She sighed and started walking again, trying to keep some distance between them. He didn’t say things like that to seduce her. For Deke, it was the truth, and he didn’t hold it back. He never did with her. If he did, he might be easier to resist.

“My brother is also stationed here.”

He rolled his eyes. “Should have known. So, did he complain until you moved here?”

She smiled. Deke and her brother had a love/hate kind of relationship. “No, actually he’s gone a lot because he’s on the IG inspecting bases. So, for the Pacific, that means he has to go to Asia a lot.”

“Of course. You know he never wanted to settle down.”

They both knew the state of her parents’ marriage. Her father had never been able to adjust to being a civilian, and it had ruined the happiness that usually comes from retirement—not to mention her father had never really taken his marriage vows seriously. Considering how short and turbulent her own marriage to Deke had been, she often wondered if her family wasn’t cursed when it came to relationships.

“So, you moved over here with your friends. You didn’t tell me.”

“I called you to give you my new address. You never responded.”

She knew with his job, he was gone a lot. It was something she had never gotten used to. Never would.

“Oh. Yeah, we had a bad mission. Kade was fucked-up pretty bad.”

They walked side by side for a while. It was nice

“I can’t believe you moved over here.”

He stopped again and stared at her. “I’m always interested in you, Samantha. You know that.”

Seeing him there, with the sun setting behind him and the waves crashing against the rocks, she couldn’t fight it, didn’t want to. They were wrong for each other. They had bad tempers, they fought too much, and neither of them was ready to negotiate. Compromise wasn’t in their vocabulary. But the need that always seemed to ignite when he was near was too strong. She stepped closer and rose to her tiptoes. Slowly, without closing her eyes, she brushed her mouth against his.

He skimmed his fingers up her arms. “We said we wouldn’t do this again.”

She drew in a deep breath then released it with a sigh of pleasure as he slid his fingers over her pulse. “We always say we won’t do it again.”

He looked up at her, those gray eyes dark with need. His lips curved slowly. The breath she had been taking tangled in her throat. Her heart did the slow roll it did right before it fell at his feet.

“I have a really nice room with a great view.”

“Yeah, why don’t I show you?” He stepped back and held out his hand. She looked down at it, knew that this was her decision. This time it was all up to her.

She looked at him and smiled. It was insane and it was really stupid, but just like always, she couldn’t resist him. All of the barriers she had built crumbled when she saw the curve of his lips. There was something wrong with her—with both of them—but she didn’t care.

Without a word, she threw away all her worries and took his hand. He raised it to his mouth. Keeping his gaze on hers, he touched his lips to her fingers.