Hi all! This is kind of a special Sexy Saturday. Why? It is the first cover for many of the people involved.

Last Sunday my friend and goddess of photography Jenn LeBlanc, shot a new model, Karl Biermann and he is a natural. Well, KARL is actually going to be on another cover of mine later, but I wanted to reveal this, his and model Jaci Nudell‘s first cover.

This is actually a first in many ways. I am lucky that one of my best friends in the world is my PA. Not everyone can say that, but I can. So, when Brandy expressed interest in doing covers, I had to give her a shot. Since Southern Sins is a brand new series for me, we decided to go for this one.  Kendra Egert’s talent is stamped all of my other series, so I didn’t want to change that of course. I think for Brandy’s first cover, she did a FANTASTIC job. I am really rather proud of her and can’t wait to see what else she does after this. BEHOLD THE COVER! 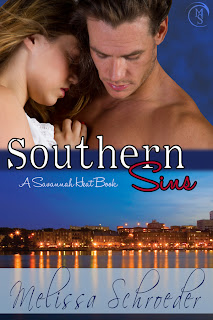 Southern Sins: A Savannah Heat Novel
A woman with a past.
Raised by her maternal grandmother, Raelynn Hill has been a part of Savannah history for as long as she can remember. While most residents still whisper about her mother’s unsolved murder, Raelynn has moved on. Her bakery and bookstore Sweet Reads is so successful, she can barely keep up. The only thing she is missing is an active love life and she thinks new Savannah resident Nikolai Papas might be the guy for the job.
A man searching for a new future.
Needing a change of pace after two tours in Iraq and a divorce, Nik moved to Savannah after accepting a job on the police force. His sweet tooth led him to the popular bakery…and he has been in lust with the pretty bakery owner Raelynn since he first saw her. She bakes the most amazing treats, loves everything vintage, and has that slow southern accent. When a little flirtation turns into a date and that little date turns into more, Nik finds himself completely enthralled.
For the first time in her life, Raelynn finds herself more than just a little in love. Nik is hot, romantic, and everything a girl could want. But someone from Raelynn’s past isn’t happy with the situation, and he will do anything to stop the new love from blossoming into something more–even murder.