Illicit Intuitions’ Ava Malia is in the House! 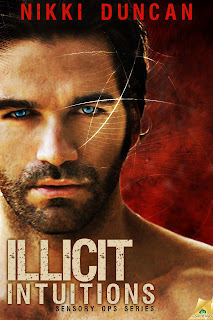 Hi. I’m Ava Malia, the newest addition to the FBI Specialized Crime Unit. And yes, I am aware that sounds like an introduction made at a 12 step program. Though as much as I’m enjoying it, I may need 12 steps to get through my current assignment.

See, Nikki introduced me to Kami in SCENT OF PERSUASION and that led me to her the FBI Specialized Crimes team which of course led me to Dr. H’s lab. And yes, Dr. H is really his name. Or at least that’s the only thing anyone other than his sister is allowed to call him. I’m hoping that one day he’ll trust me enough to let me call him H, or even his real given name, but that’s not my point here today.

I was going to talk about how my life has changed since meeting the FBI team I’m now a member of. See, when we first met, I was working as a call-girl. How’d I get into that you ask? Well, I was working contract for a company and when some issues arose, they sent me in as an escort. I never dreamed agreeing to the extremely unorthodox assignment would lead to where I am today.

On that job I met Kami Evans, who is now a great friend. She was having some trouble that I was able to help her out with, though not as much as her new fiancée, Breck. Her part of the mystery is solved, but another mystery was unearthed during the investigation. Dr. H.

The man hates secrets, but he is one. A loner in the world, except for keeping his sister close, he’s guarded. Suspicious of pretty much everyone. And I guess that considering how he and his sister were kidnapped as children and experimented on their whole lives that he has a bit of a reason. It does make getting close for the sake of an investigation a challenge.

What has surprised Dr. H, and me, is how connected we became and how quickly. With a kiss, and I don’t mean this in a cliché way, he shattered everything I thought I knew about myself. About my world. His touch awakened a part of me I didn’t know existed and I have to say that even with the agony of discovery I’m grateful for it. The connection with him is like a blood link on a deeper level. In an odd way it’s turned us into a family we never expected.

I have my blood family, who I love, but I am learning to cherish the family I’ve found in my new team and with Dr. H and Dana and our shared abilities.

Will you tell me about your family connections? Are they blood? Are they close friends? Who is so important to you that you can’t imagine life without them?

Love could be their greatest liability.

Ava Malia knows three things. She was once a kickass covert operative. She will eventually adjust to her new team, the FBI Specialized Crimes Unit. And the only way to finally be free of her professional past is to solve her first case and get her hands on a game-changing technology. The only problem? Success rides on her ability to swallow her distaste for the persona she must adopt in order to earn the trust of a mysterious scientist.

Dr. H escaped childhood captivity with three things. His sister. Complete control of his gift. And an engulfing distrust of anyone in the government. Adjusting to a life of freedom hasn’t been easy, but he’s found peace in solitude. The sexy woman auditing his empathic studies, though, has a way of getting under his skin that’s both arousing and disturbing. Plus, his psychic ability warns him of secrets so deeply buried in her psyche, they’d be better left alone.

Yet their instant attraction strips away all their protective barriers, down to the foundation of a new, fragile trust. And a vulnerability that, when an old enemy opens fire, could blast away any chance of a future.