Guest Author & Giveaway: Tilly Greene - Melissa Schroeder
I enjoy the research phase of writing and Missing in Paradise presented a unique avenue to follow with the profession of the heroine, Mary Miller.  She hosts a Martha Stewart type show based in Hollywood that focuses on repurposing, reusing and recycling craft projects.  I am not a craft person, although I wish I were and envy those who can do such things.  With those feelings rambling around in my head, I took great pleasure in bringing not one but two wonderful projects into the story in hopes readers would be inspired to take them on for themselves.
What are they? 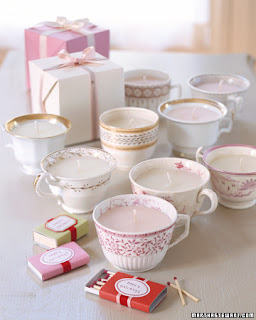 Well, one was found on the Martha Stewart site titled Teacup Lights and this is how it evolved into Missing in Paradise scene:
“After the used wicks have been removed and all the old and any new wax you want to add melts in a pan sitting in another of boiling water or using a double boiler, clean and dry the tea cups you’ve collected.  Next, take a length of fresh wick, attach one end to the stabilizing metal tab and set it in the bottom of the cup.  Stretch the wick a couple of inches above the cup’s rim and cut.  Wrap the excess around a skewer, either metal or wood would be fine.  Carefully dip the wick in the melting wax, then lower it down until the sustainer disk rests on the bottom of the cup.”
Mary looked down at what she was doing while explaining the process to the camera and audience.  She noticed her hands were shaking and sought a calm place for more energy to help her continue filming until they were done with the segment.  Most likely it was another beautiful day in Los Angeles and everyone inside the sound stage was missing out.  Instead of enjoying the sunshine or even the amusement park, the audience members paid good money to enter, they were locked inside a studio waiting for her to finish.
Enough with the pessimism!  She pushed the negativity away and would deal with it later.  There would be no more takes, this would be the last of the day.
“Like this,” she looked up at the large camera with what she hoped was confidence, then back down as she settled the skewer along the rim.  The next phase was where the problems had previously peaked and she chose to change things up a small bit to buy a bit more time.  “If your cup is delicate, you might want to use a basting brush to wipe the inside walls with a bit of wax.  Let it cool down before moving on to the next step.”
Slipping her hand into a kitchen glove, she picked up the pan filled with burbling wax.  Slowly and with care, she started to pour the pink molten mass into the delicate tea cup.
“The wax is very hot.  Make sure the pot you choose to use is not too big or heavy.”  Inhaling through her nose, she slowly let it out through her slightly parted lips and carefully poured the liquefied wax into a beautiful flowery cup with a chipped rim.
“Remember, the wax is very hot.  No multi-tasking.  Go slow and stop pouring about a half inch from the rim.”  Reaching the necessary level, she set the pot back down, and took a few steps to camera left, which was to her right.  She could see the spot marked by a large black taped x on the floor out of the corner of her eye.  It also helped to have a cup with the wax already set and prepared for the next step waiting on the counter.
“Once all the cups are filled, leave them for an hour.  The next step is to fix the depression around the base of the wick.  Using an unused skewer, poke some holes around the wick and pour a bit more wax until the top is leveled.”
The end of the segment was in sight.  At last, Mary believed she could finish without any more mistakes.  In her line of work, people were often put on a pedestal and joyfully knocked back, which meant she had to be careful.  She took a few more steps to her right and stopped in front of half dozen completed cups.  Picking up a pair of scissors, she snipped the wick and looked back at the camera with a stiff smile.
“When you have a smooth surface and the wax is set, clip the wick.  There you go.  A way to use a tea cup which has lost its saucer or handle, or, in this case, has a chipped rim.  They make great gifts or for decoration around the house.  You could also add a special scent or color.  As you can see, mixing the wax from candle stubs you were going to throw away results in an interesting swirl of color. “
While talking evenly and with clarity she wasn’t feeling, Mary held up the results of what could be done with the craft project for a different camera to catch with a close up for viewers at home.  Relief for being almost finished with the show and week washed over her and helped ease her smile and to stand a little straighter.
“And there you have it, another way to reuse a well loved treasure.  Directions for today’s projects are on the website.  Monday we’ll make a creamy leek and potato soup using your garden herbs and look at how to repurpose an unwanted sweater as a purse.  You heard me right, a purse.  Have a great weekend, everyone.”  The audience clapped and the floor director motioned they were clear.  Sighing with relief, she addressed the audience.
“I want to thank all of you for coming to today’s taping and being patient with me.  It was my intention to entertain you and pass on tips to make reusing things we often find no reason to keep more fun, only it took longer than we’d expected.  Please accept a tote bag with goodies inside as a token of my appreciation for sticking with me during filming.  None of it would have worked without all of you.”  She smiled at the pleasant mutterings of surprise many offered at being given a canvas tote bag filled with hopefully useful stuff.
©Tilly Greene, 2011
Yes, Mary was having a bad day, but the project and filming turned out wonderfully.  Here is a bit more about: 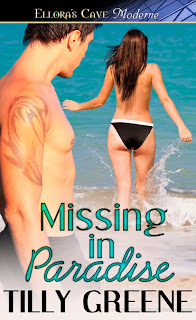 Missing in Paradise by Tilly Greene
Contemporary Erotic Romance + Bondage
Published by Ellora’s Cave
Buy eBook from Ellora’s Cave│All Romance│Amazon│BN│Sony Reader Store
When the love of Mike’s life breaks up with him abruptly, he doesn’t know where to turn. Mary is an emotional mess who reacts without thinking, and immediately regrets her decision. Making things right with Mike isn’t easy. It requires privacy to rebuild their love and share their lust. Neither expects their getaway to become a major news story.
The tattooed retired surfer and daytime TV star are opposites, yet perfect for each other. But paradise isn’t easy on them. Their bond will need to stand up to the strain of a public-relations nightmare if they have any hope of making it work.
Mistakes are made and they need privacy to fix things, but what about the media?
Missing in Paradise contains one more repurposing project and while not as detailed, it is another one I would love to do myself.  What type of craft projects have you done or want to do that reuses an old favorite?  A random commenter will win a copy of Missing in Paradise – a name will be drawn after midnight on Saturday the 7th.
Tilly Greene
Scorching romances full of twists, turns and ties.
www.tillygreene.com
Facebook│Twitter│Hot Thoughts Blog│ARe Cafe