Guest Author & Giveaway: Renee Wildes - Melissa Schroeder
Spring – A Time of Hope & Renewal
Hearing the honking of returning geese for the first time is the first sign of spring for me. Figure skating winding down for my daughter Tami, and the landscape changing from white to green. Kids play Frisbee while they dream of water parks. Also a time of hair—with 2 horses and a chow shedding out, every bird within miles has a fiesta getting fluff to line their nests. Glad someone can use it! Our chow Abby saw her first squirrel, and her first bunny. Birds are moving into the trees by our house.
Soon our next door neighbor will be readying her plot for the new garden. We’re still trying to decide if our baby pine tree survived the winter indoors.
With everything coming out of hibernation and returning from their wintering grounds, it’s like the whole northern landscape comes to life. Still the risk of one last snowstorm, but the air is full of hope and promise. I hate the winter cold, driving on ice, not being able to see my horses. It’s amazing when “spring ahead” kicks in and I can still see the sun when I get out of work at 7 PM. Definite mood elevator.
Springtime for me means horse time. Always astounds me they remember me. (We live in the city of Wausau, WI so we board—get out to see them on the weekends.) I’ve always had horses, and they are an integral part of my life and my books. Funny watching two woolly mammoths turn back into horses. I have 2 half-Arab mares and love riding through the woods with my daughter Tami. It relaxes me, out in the sun, with bird song and a fresh, still-cool breeze rustling through the branches that might still have buds or new pale-green leaves, depending. Hooves squelching through mud, my Sassy snorting and tossing her head when a squirrel cusses us out for coming too close. She insists on jumping obstacles she could easily step over and spooks at bunnies.
The horses got out the other day. All of them. I was working, my trainer Lori was also at her day job, and her HUSBAND took the call from an irate neighbor saying “Come and get them.” So, here’s one guy w/2 hands. 2 halters & leadropes. For FIVE horses. But he goes down there and manages to catch the baby, Jr., and Uno. A horse in each hand. Angel, Moonlight and Sassy following him like the Pied Piper down a country road in Hatley, WI. He just said he was glad no cars came along until he could get them back in their home pasture—and fix the hole in the fence.
(Compliments of MY Morab, Sassy. She’s done it before. She’s like an equine security expert—if there’s a flaw or weakness in the system, she’ll find it and exploit it, therefore helping us dumb humans keep the fence solid and secure. She’s a very dedicated investigator.) 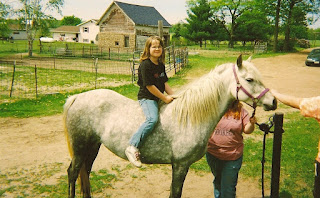 Tami’s pony Moonlight is twenty and still going strong. They’ve formed a tight bond, although Moonlight’s a bit old and slow for an active 11-year-old girl, they’re still best buds. She’s with us for life, even though Tami’s threatened to trade with me, stealing Sassy for herself and leaving “the two old ladies together.” (Thanks, sweetie!)
The hope and promise of a new season translates into writing. Judging and critiquing obligations are finished. Time to focus on the next new story. Calling it God of Fyre Mountain, it’s Dax’s story. (Pryseis’ nephew from Dust of Dreams.) Dust of Dreams is all about hope and peace and tolerance – being at peace with yourself and the world. Dax is still learning that. Meeting Maili helps.
Dax is half dream faerie and half forest troll. Being neither, and yet both, is hard for him. I think it’s important everyone can just take a deep breath and love the skin they’re in, be comfortable with who and what they are. I think it’s the most important lesson to teach our kids—that it’s okay to just be themselves. And once they accept themselves, makes it that much easier to accept others. The first step to peace.
Spring is for renewal and hope. Gives the world a fresh start. Ongoing themes in my Guardians of Light series. Peace and tolerance and cooperation. Hope for a future without prejudice and fear and war. A gal can dream, can’t she? As a fantasy romance writer, that’s what I do best—good triumphs over evil, the girl always gets the guy and they lived happily ever after.
Just a matter of time before that happens in real life.
Spring keeps me hopeful.
~~~~
Renee is giving away an ebook of choice for Guardians of Light series. Check out here site to see what she has. Give away is open international. Just leave a comment or question (something more than “It sounds really good”) 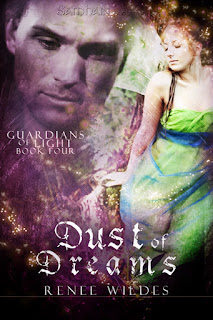 Excerpt from DUST OF DREAMS:
Dax gathered his things under the watchful gaze of the raven. “Don’t you have somewhere else to be?” he asked. “Someone else to bother?”
She ruffled her feathers at him.
“Nay?” Just his luck to be shadowed by a shade. The shamans bespoke communing with the shades of the Otherworld. Not being a shaman, Dax had no idea what she wanted of him. “Shall he succeed?”
She offered no discernible clue.
How like a shade to keep her beak still on the important questions. Dax started down the ravine. Follow the rill westward…toward the fearsome barrier of Light encasing the elven realm. He must be mad, heading toward the enemy. He pulled out Pryseis’ charm, studying the crystal which sparkled in the filtered sunlight. A message? What did the elven healer mean?
That Benilo had healed him was…unsettling. Dax still felt the echo of fierce melting pain, the struggle to breathe as everything seemed turned to liquid. He shuddered. How had the healer reversed the poison and restored his strength? Him. A troll. An enemy. A reluctant smile tugged at the corners of his mouth as he recalled sending the elf flying with a solid punch. The healer was tougher than he looked.
He’d have to be, where he was going. Dax glanced at the raven. “I should go with him.” She yanked on another coil of his hair. Hard. He clamped down the curse. At the rate she went, he’d greet the elves bald as a vulture.
Elves…and a dwarf. There’d been rumors of dwarves aligning with the elves. Mayhaps Pryseis’ visions of peace weren’t out of reach. Dax snorted. Peace. As if centuries of differences would evaporate. He’d fought on the wrong side of Enoka Pass. What would the elves say on that? He still saw the shock in the elven youth’s face as Dax’s thrown spear felled his horse and knocked him to the ground. The fear. The pain as he parried a blow too slowly and Dax cut him down. The fading light…the stillness. Youths weren’t meant for war.
“‘Do your people wish for naught more than birthing more sons to fight, to bleed, to die?’” Benilo’s question came back to bite him, an echo on Pryseis’ theme.
The raven launched herself into the air to sail overhead on the wind.
His stomach rumbled. Somehow he didn’t think she’d allow stopping to hunt. Dax reached back into his pack for a strip of dried swamp buck meat, laced with fat and dried berries. He gnawed on it as he followed the water’s edge. A flash of silvery scales splashed the surface. A fat trout. He’d rather have the trout. Stuffed with spicy hundel roots and wrapped in salty mateska leaves, roasted in the hot coals at the edge of a banked fire for the span of three hundred heartbeats. Dax sighed and glared at the strip of journey-food.
A red squirrel chattered at him as he passed under the black oak it clung to. Pan fried squirrel with fresh morels…
Dax growled and chewed his swamp buck. Some days he couldn’t win.
Pryseis ignored the hunter/killer part of his nature. All the faeries accepted the trolls as they were. But most were uncomfortable around Dax. Being both, yet neither. Neither side, faerie nor troll, was sure what to make of him. Only Pryseis treated him as a person.
And he’d failed her.
~~~~~
Renee Wildes is an award-winning Wausau WI writer. She grew up reading fantasy authors Terry Brooks and Mercedes Lackey and is a huge Joseph Campbell fan, so the minute she discovered romance novels it became inevitable that she would combine it all and write fantasy romance. Renee is a history buff, from medieval times back to ancient Greece, esp. Sparta. As a Navy brat and a cop’s kid, she gravitated to protector/guardian heroes and heroines. She’s had horses her whole life, so became the only vet tech in a family of nurses. It all comes together in her Guardians of Light series for Samhain Publishing – fantasy, action, romance, heroics and lots of critters!
Visit Renee At: