Guest Author & Free Book: Nina Pierce - Melissa Schroeder
When the Heart Overrides the Head
I’m a romantic at heart. I believe in soul mates and happy-ever-afters; true hearts and forever love. But why wouldn’t I? I grew up in a blessed home, one of five children, surrounded by love. I started dating my best friend’s older brother when I was a freshman in high school and married him eight years later. We’ll be celebrating our 28th wedding anniversary this fall.
So yeah, I believe in everything romance novels promise the reader.
But how about love at first sight? It seems this is one area even regular readers of romance seem to have a hard time swallowing. I’m not sure why. There have been countless true life stories of couples seeing each other across a crowded room and the “magic” happens and they just know. It’s their family that’s left to play catch-up with the whirlwind romance and an engagement a month later. But forty years later when their children and grandchildren are dancing at their anniversary celebration, no one can argue that sometimes the heart is so much smarter than the head. 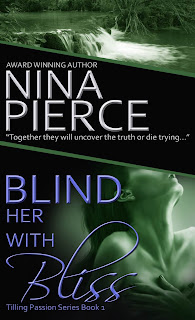 In my sexy romantic suspense short novel, Blind Her With Bliss, Julie Tilling’s parents have this kind of true love and she’s not sure there’s a special someone out there for her. But one night with Damon Corey and her heart knows he’s her soul mate. Of course it takes awhile for her logical brain to acknowledge the truth.
So I’m wondering what you think of love at first sight? As a reader is it something you have a hard time with or are you okay with it? Do you know anyone who fell in love when they saw their true love? Because I’m always curious about that sort of thing.
BLURB:
She’s trying to find herself. He’s attempting to hide. Together they’ll discover a truth that threatens them both…

Investigating the death of her best friend, uptight accountant, JULIE TILLING, discovers a world of adult nightclubs and Internet intrigue. When shock jock DAMON COREY rocks her world in a wild night of lust, she wonders if she’s found love…or the key to solving a murder.

EXCERPT:
“You ever ride a motorcycle, Julie?”
She pulled off the helmet and fluffed her hair. The corkscrew curls of copper fit her cute features much better than the black wig that had overpowered them.
“Not one this fast,”
He bit back a smile. “No, I meant any motorcycle.”
“Was it that obvious?” Color rose from her chest and deepened her already flushed cheeks.
“I like to be a woman’s first.” Shit. Even clean shaven and wearing his glasses, Demon’s persona had a bad habit of popping up at inopportune moments.
Julie stopped contemplating her toes and stared straight at him. Emotions moved over her face and clouded her eyes, but he didn’t know her well enough to read between the lines. He’d just met this wonderful woman. He hadn’t intended to scare her off.
“Julie, I—”
“No, Damon. You don’t have to apologize. I get it.”
He hadn’t thought her cheeks could become redder, but he was wrong.
“You have a lot of women available to you,” she said, quietly. “I’m sure they’re much more experienced than me.” She shrugged and fiddled with the strap of the helmet. “I’m sure you realize I don’t usually let go the way I did last night. And I know you weren’t really expecting the person you found at the family homestead?” She emphasized the last two words as if they were obscenities. “The Jewel of last night was more your speed. I get that.”
Oh, hell no. “No, Julie, I—”
Her hand flew up between them. “No, Damon, seriously, you don’t owe me anything. Obviously my father dragged you into an uncomfortable situation. Well, you’ve done your social obligation. I’m home safe and sound. I didn’t mean to disappoint, but I have a hard time living up to everyone’s expectations of who I should be. So, thanks. I get it. Good night.” The helmet landed in his lap.
“No, Julie, really, you don’t understand.” He yelled at her retreating back. “Julie, wait.” Damon attempted to jump from the bike, but the stand wasn’t down, and he had to juggle the extra helmet. “Damn it all to hell. Julie…” He finally managed to extricate himself from the bike and the helmets and caught her just as she pushed open the front door. “Please. I think you’ve misunderstood. Just give me a minute to explain. Then I’ll leave.”
Her arms knotted across her chest for protection. A wounded heart? He’d have to tread carefully. The emerald eyes shimmering in the waning light telegraphed her pain and embarrassment, but her lips were pursed thin with determination. The woman was a walking enigma. Damon suspected she had no idea how damn sexy she looked standing there, inviting him to explain himself—daring him to breach her defenses.
“Look, Julie. I’m not going to lie to you. Demon Jones is very popular with the ladies. Damon Corey…not so much. If you’re looking for the person I was last night, well, you’re in for a big surprise. He’s as fake as Santa Claus.”
The tip of her tongue darted out to wet her full lips. “I still believe in Santa Claus.”
She would. “The Easter bunny, then.”
“But he doesn’t try to pass himself off as anything but the chocolate peddler that he is. I don’t think any hearts have ever been broken by the Easter bunny.”
“Julie…” Damon’s hand found its way to her cheek, his fingers tangling in her hair. She smelled earthy and fresh, and he gulped in great breaths of heaven, not sure he could ever completely fill his lungs. He gauged her reaction as he leaned in, his gaze sweeping her rounded cheeks and pouty mouth. When he brushed his lips against Julie’s satin warmth, her eyes fluttered closed and he nibbled on her full bottom lip. A sweet moan of surrender escaped a moment before she opened for him. Their tongues tasted and explored, and he walked her backward into the living room to shut out any neighbor’s prying eyes.
~~~~~~~~~~~~~~~~~~~~~~~
This book is FREE on all venues:
BUY Link for KINDLE Lovers
BUY Link for NOOK Lovers
Award-winning romance author, Nina Pierce, grew up in a house full of readers. So becoming enamored with books was only natural. She discovered romance stories in her early teens, falling hopelessly in love with knights in shining armor and the damsels who saved them.
Eventually, reading about alpha males and the journey to find their happy-ever-after endings wasn’t enough. She needed to pen her own stories of fated loves and soul mates. Nina’s discovered the passionate side of romance with her sexy stories. For her, it’s all about the sweet scent of seduction mixed with the heartwarming aroma of romance.
Nina resides in southern New England with her high school sweetheart and soul mate of twenty-seven years, their three grown children and several very spoiled cats who consider her “staff”.
You can keep up with her releases at her website or follow her on Twitter and Facebook