Guest Author & Giveaway: Mari Carr - Melissa Schroeder
Co-writing
I’ve always considered writing to be a solitary career. It’s something I do alone in my office. Over the past couple of years, my eyes have been opened to an exciting new world—co-writing.
I met Jayne Rylon at Lori Foster’s Readers-Writers Get Together back in 2009. To say we hit it off instantly would be an understatement. I was familiar with her, having read her stories, Nice and Naughty and Dream Machine. I knew she was a talented writer and as the years have passed, she’s become a very good friend.
One night in the midst of a string of emails between us—this is sort of a nightly thing and for the most part, we talk about nothing—she said we should write a series together. From there, the Compass Brothers Serieswas born.
The final book in the series, Western Ties, released last week and I thought I’d share an excerpt of it with you today. 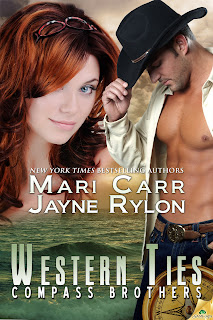 How strong are the ties that bind?

Her plan to play anonymously is shot to hell when she runs into high-school crush Sawyer Compton—and he lays immediate claim to her.

Sawyer Compton commands total control, in and out of the bedroom. He never thought Leah could handle his darker urges, but one look at the white bracelet that marks her as a sub ripe for the picking, and he knows exactly how this night is going to end. With Leah in his bed.

Leah didn’t expect to enjoy the comfort Sawyer’s familiarity brings, even as his touch takes her to unimaginable heights of pleasure. When bad news from home sends him reeling, she’s more than prepared to offer him anything he needs: her body, her friendship. Even her heart—if Sawyer can loosen the reins over his own to accept her love.


GIVEAWAY: I’ll give one commenter their choice of an ebook from my backlist? All you have to do is check out my books page, tell me which book (and eformat) you’d like to read and I’ll pick one winner tomorrow morning.