Guest Author & Giveaway: Karenna Colcroft - Melissa Schroeder
Writing What I Want
Many authors choose a particular genre, subgenre, gender pairing, etc. to write about. In some ways that’s expected; an author wants to build a brand, and part of that brand might include having books that are related in some way. And some readers become annoyed when, for example, an M/M romance author they enjoy reading turns out to also write heterosexual romance. 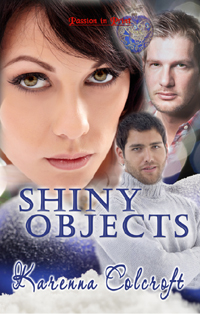 Personally, I’ve found that I can’t limit myself that way. When I started writing romance, I wrote exclusively heterosexual, mostly contemporary, stories. But that wasn’t all I wanted to write. I wanted to do some paranormal books. I also wanted to do some M/M romance, though I didn’t know as much about that at the time. And I wanted to do some BDSM romance.
When some authors cross boundaries within the romance genre, they choose different pen names for each different thing they write. Partly that’s a matter of keeping things separate, and partly it’s to avoid confusing or annoying readers. I couldn’t do it that way. When I wrote my first M/M romance story, the short story “With this Flower,” which appears in the Dreamspinner Press anthology Wishing on a Blue Star, I was already juggling two pen names. I had Karenna Colcroft for romance, and a different name for the young adult fiction I also write. I didn’t want to add another pen name to the mix; I was confused enough as it was.
I chose to write that story because, as I said, I’d been wanting to write M/M romance anyway, and the anthology was honoring author Patric Michael, with whom I’d become friendly on a Yahoo loop. I couldn’t imagine not participating. So I took the chance. 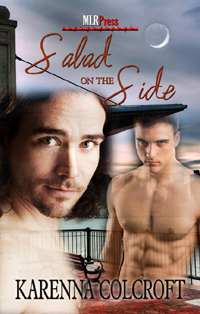 That wasn’t the only M/M story I’ve written. In 2010, a conversation with some friends led to my writing a thousand-word scene to explain how a werewolf could be vegan. That scene grew into my M/M paranormal romance novel Salad on the Side, which was published in June 2011 and is now the first novel in my series Real Werewolves Don’t Eat Meat, from MLR Press.
I’ve continued writing heterosexual romance, and now I also write M/M romance. Both under the name Karenna Colcroft. I haven’t gotten around to the BDSM romance yet, but I have one in the planning stages. I don’t sit down and say, “Oh, I need an M/M story, what can I write” or anything like that; I get an idea, and the characters tell me what their sexuality is and how many of them there are. (I have one heterosexual ménage novel—two men and a woman, no contact between the men, and am planning a gay male ménage.)
I write what I want and what the characters seem to want from me. And I enjoy every minute of it.
What are your thoughts on authors who don’t stick to one type of book? Leave a comment to be entered for a chance to win an e-book from my backlist. You can find out more about me and my books on my website, www.karennacolcroft.com.