Guest Post & Giveaway: Corrina Lawson - Melissa Schroeder
One of the questions I hear a lot is “Where do you get your ideas?”
I assume I get that more often than other writers because my ideas are a little out there. 🙂 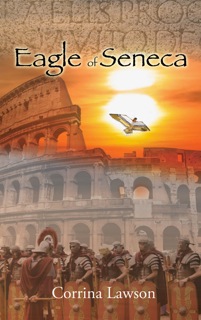 The book I’m offering as a giveaway today, Eagle of Seneca, arose from a whole bunch of different inspirations, including my love of all things King Arthur, reading Isaac Asimov’s Science Fiction Magazine as a teen and my fascination with history of King Philip’s War in New England, the last significant effort by the Northeastern native tribes to drive out the English settlers.
Add in the inspirations for my characters, which include the varied cast of Lois McMaster Bujold’s science fiction stories and my love of superheroes comics, and you have the mash-up that is the alternate history Seneca series.
The series is set around 900 AD in a world where the Roman Empire survived to colonize North America. For the characters,  I had people from three different cultures:–Native Americans, Romans and Vikings. The fun of writing the romance was to see if couples from such different cultures could overcome the cultural boundaries.  Not to mention the great chance it offered for conflict and angst. 🙂
All this meant I got to write a Native American princess flying a glider developed by her lover, a Roman engineer, to attack an invading fleet from the European Empire. Not to mention having Viking longships battle the fleet, which is about the level of technology of Revolutionary War era British warships.
Best. Job. Ever.
I think most writers experience the world in a unique way in that everything they absorb–books, movies, television, travel, family, children–eventually rolls around in their heads and becomes inspirations for tales, though perhaps not in the same mosh as mine do.
For example, I was just lucky enough to spend several nights at the Four Seasons in Beverly Hills on a press junket for my work with www.GeekMom.com as a mommy blogger. Aside from deciding that being treated as rich doesn’t suck, It’s extremely likely the hotel will become a setting in one of my books down the line. I also got to meet Betty White in person and she made such an impression I suspect a character inspired by her will end up in a book at some point.
So the ideas come from everywhere.
And here’s the best part of that: that means everything you do as a writer can be research or classified as part of the writing process. Want to absorb Jayne Ann Krentz/Amanda Quick’s full backlist in a month? Awesome, I can learn how to plot suspense properly as well as be entertained. Watching “How the Earth Was Made” on cable television when I really should be writing? That’s okay. Because something in that show tripped an idea for the basis of magic in the steampunk world in my current work in progress.
About the only thing I can’t use in my writing are my kids, at least not directly. (Okay, I did use one of them for a cameo in a book.) But I think drawing on the joys and frustrations of parenting can really inspire a writer as well, even if only to make them run to a computer to make up stories to escape. 🙂
So the writers out there, the next time you’re sitting down in front of a television with popcorn and soda to watch a movie instead of write, it’s not being lazy.
It’s called looking for inspiration. 🙂
~~~~
Prize: ecopy of EAGLE OF SENECA
Buy: Amazon
For the giveaway: It is open international, ebook only.
Get your name in the running just answer the following question:
What energizes you up as a writer or a reader?
(Could be anything from music to comics to books to movies.)
Learn more about Corrina and her books on her website