Guest Post: Meg Benjamin - Melissa Schroeder
Cover Me
Any writer will tell you—covers are always an occasion for stress. In my case, I never know exactly what to expect, but I usually have an idea of what I don’t want. Fortunately, the cover artists for my Konigsburg books, Natalie Winters and Valerie Tibbs, always come up with something that works.
Julie Ortolon did a nice rundown on the history of romance coversfrom clenches to objects to cartoons. She includes the “headless horsemen,” guys whose heads are missing but whose abs are prominent featured, but she didn’t include one more category that I know of—torso girls. These are the covers featuring nude or partially nude women clutching their breasts or crossing their arms across their bosoms to hide the nipples. I had a torso girl on the very first version of Venus In Blue Jeans and wasn’t happy with it. Neither was my editor. You can see the version we finally ended up with here. I love it, but it took a while to get there.
After we had this lovely picture of a smiling heroine, that seemed to set the pattern for the next three books about the Toleffson brothers. Two of them (Wedding Bell Blues and Long Time Gone) featured the heroines. One (Be My Baby) featured the hero. Of the three books with heroines, two have “headless horsemen” in the background, while one (Wedding Bell Blues) has a guy in a nice blue blazer since he’s heading for a wedding and can hardly show up semi-clothed (although that particular wedding might have been okay with it).
When the Toleffson stories were finished, we wanted the next covers to have a different feel to go along with the new storylines. So Brand New Me featured a couple looking at each other rather than a single character looking directly at the reader. There’s also a different color scheme and (love this part) a field of sunflowers to give the cover a sort of golden tone.
Which brings us to Don’t Forget Me, the latest Konigsburg book. 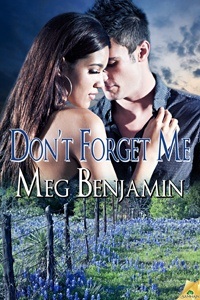 This is actually the first time I’ve gotten a cover where I looked at the people and said, “Yes! That’s Kit and Nando.” I frequently don’t have a firm picture of my hero or heroine in my mind as I write. I do the usual thing where you think of a movie star who’s sort of the same type and then associate your character with him/her (Kris Kristofferson for Cal, Steve McQueen for Tom Ames). But that was just a kind of mental crutch rather than a real picture of what my characters looked like. With the earlier covers, I came to believe that the people on the cover really looked like the people I wrote about (Docia in particular seemed true to life), but I didn’t start out feeling that way. This time, on the other hand the people on the cover were the people I’d envisioned—which is really sort of scary when you think about it.
So thanks, Valerie. It’s a beautiful cover. And it so looks like them!
Here’s the blurb:
Once they said goodbye forever. Now they want to walk it back.
Konigsburg, Texas, Book 6
Eighteen months ago, Kit Maldonado was so over Nando Avrogado, she left Konigsburg without a backward glance. With the family restaurant in San Antonio sold out from under her, though, she’s back to manage The Rose, an exclusive resort eatery outside town.
Dealing with a stingy boss, an amorous head chef, an understaffed dining room and planning her aunt’s wedding should have kept her hands full. But she realizes she might not be as over Nando as she thought.
As the town’s new assistant chief of police, Nando’s got enough trouble without sexy Kit fanning embers he thought had long ago turned to ashes. Every time he turns around, she’s there—and it doesn’t help that everyone in town wants to see them back together.
One incendiary kiss, and there’s no denying the force of their attraction. But there’s a mysterious and oddly familiar burglar who’s been lurking around Konigsburg, someone who isn’t above a little mayhem—maybe even violence—to cover his tracks.
And a short excerpt:
Kit started toward Sweet Thing a bit gingerly, trying not to collide with either retirees or ten-year-olds, when something flashed at the end of the next block. She glanced up to see what it was.
A couple of Konigsburg cops were standing next to a parked cruiser talking as the sun reflected off their gold badges. One of them was a stranger—blond and apparently very young. Maybe he was a new officer. There had to have been some turnover since she’d been in town last.
The other was familiar. Kit’s heart gave a quick thump as her chest clenched tight. Very familiar. Even at a distance she recognized that tall, muscled body, that fall of dark hair. He held his Stetson in his hand, ready to put it on. She caught the quick flash of his teeth as he grinned at something the kid had said. Then he turned in her direction.
She stumbled backward into a doorway, her heart pounding almost painfully. No, no, no! She didn’t want to see him the first time like this. She wanted to be ready—controlled, collected, maybe even a little amused. Oh, hi, Nando. Long time no see.
Right. Like that was ever even a possibility. She peeked around the edge of the display window at the side of the door, trying to see if he’d spotted her.
He still stood where he had before, although she thought he was still glancing in her direction. Then the kid said something else, and he turned back. After a moment, they both climbed into the cruiser.
Kit pressed a hand to her chest, trying to catch her breath. All right. You’re all right. She wasn’t, though, not really.
Over him. So over him.
She wanted to be. She needed to be. But now she had to admit it—she wasn’t even close.
Purchase
Meg Benjamin is the author of the Konigsburg series for Samhain Publishing. Book #3, Be My Baby, won a 2011 EPIC Award for Contemporary Romance. Book #4, Long Time Gone, received the Romantic Times Reviewers’ Choice Award for Indie Press Romance. Book #5, Brand New Me, was a Long and Short Reviews Best Book. Meg lives in Colorado with her DH and two rather large Maine coon kitties (well, partly Maine Coon anyway).
Where to find Meg around the web:
Website
Facebook
Twitter
Meg loves to hear from readers—contact her at meg@megbenjamin.com