Guest Post: Diana Sheridan - Melissa Schroeder
THE CIRCLE OF SEX?
Way back in the Dark Ages—1970, to be precise—I was writing what passed for “Adult” in those days. It was much tamer than what’s around today, but for its time, the cusp of the ’70s, it was daring, racy, shocking. One publisher in particular, impressed with my work, hired me to write seven features a week for his several sexpapers. (These weren’t magazines but newspapers, a plethora of which had popped up in New York in the wake of the success of Screw, pioneer of the genre.)
Not too much time had passed before he told me he was planning yet another sexpaper and asked me if I would consider editing it. I accepted. The new sexpaper, the publisher told me, would be for lesbians. The predominance of sexpapers out there were hetero in content and aimed at straight men. There were also a couple of them for gay men…but there was nothing for gay women. We, he said, were going to corner this untapped market.
We set about gathering not only suitable fiction and pictures but, with the intent of being more than just another porny paper, valid info to serve our readers with. We put together the first issue, got it out on the streets, and waited to see if we had a hit on our hands.
In a sense we did…but not in the sense we had expected. From every indication, though the paper was selling, it was selling virtually exclusively to men! The guys were turned on by stories about, and pictures suggesting (the pictures were, by necessity of law, very tame in what they could actually show), “two broads making it”…to quote a phrase we heard over and over. Now, I knew that one of the reasons men were turned on by threesomes was that they enjoyed watching two women interact sexually almost as much as they enjoyed having two women pay sexual attention to them simultaneously. So I was hardly shocked that men were buying our lesbian sexpaper, but it was certainly an unforeseen outcome.
The police eventually shut us down. Yes, that still happened in 1970. I reverted to more socially accepted forms of writing and editing and even started a business (nothing to do with sex!) in partnership with the fellow who’d published the sexpapers.
Fast forward to the end of that decade. Two ads in two different newspapers from two different magazines, ads published within four days of each other, both sought writers who were comfortable writing about sex. It was 1979, and the era of the sex digests had begun. I found myself at the forefront, writing articles, quizzes, and columns for two of the earliest such magazines. Once again, writing well led to an inquiry as to whether I could also edit, and when I answered in the affirmative, I found myself editing a new sex digest, then copyediting three others.
After I got a raw deal regarding pay, I was easily persuaded to let another publisher hire me away, and after a number of years of working for him (freelance editing from home), I found myself taking over the editorship of that company’s bisexual magazine, then editing a totally gay (gay male, that is) mag. This led in turn to a variety of other gay men’s mags…with me at the helm of all of them.
“Adult” publishing had grown up by then, repressive laws had been pushed back, and both the stories and pictures were muchraunchier. Quite explicit. Rather like the sex scenes in the m/m romance novels of today, there were no holds barred and little left to the imagination. There were basically only two differences between the stories in those mags and the stories in today’s m/m romances: One was that there was no pretense of romance in these stories. They were about hot, down ’n’ dirty sexual encounters. The other was that the buyers really were gay men.
With hetero women now buying romance novels depicting explicit sex between two (or more) men, and with my having recently started writing such books, I feel I have come full circle—from editing a sexpaper about woman-to-woman sex whose readers were men, I have come to writing romance novels about man-to-man sex whose readers are women! And the publishing industry has come full circle as well.
I’ve been a busy beaver. Though I started writing these books only recently, I’ve written nine so far: Finding Mr. Wrightis available from Siren-BookStrand. Mating Michael will be out soon—same publisher. Hitting the Hot Notes and Caught in a Web of Intrigue have both been accepted—again by Siren-BookStrand—and shouldn’t be too many months from release. I have one more there that, as of the moment I write this, has not yet been accepted, but may well have been accepted by the time you read this. I also have one out pending acceptance at another publisher, two recently released by Secret Cravings Publishing (Man-to-Man Firsts and You’ve Got Male), one more coming out from Secret Cravings soon (Cherry Pickers), and two more that I’ve contracted to write for Secret Cravings. I’m about to start writing another I intend to send to Siren-BookStrand.
Now that my life and the publishing industry in general both seem to have come full circle, I can’t help but wonder what will come next…for the publishing industry and for me! I’m certainly eager to find out. 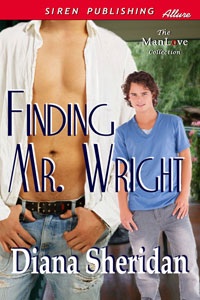 What is Finding Mr. Wright about?
Realizing he is gay but unable to come out of the closet in small-town Idaho, or continue living a lie there, Seth Danninger moves to a progressive South Carolina town, where he meets and falls in love with Evan Wright. The relationship progresses—and the reader is given all the hot details—till Seth reaches the point that he wants to marry Evan in New York, where gay marriage is legal. Seth, however, is not out as gay to his family, and Evan does not want to be hidden in a closet, so Even gives Seth an ultimatum: Introduce Evan to Seth’s family or lose him. But Seth’s dad is a raging homophobe with no use for any gay guys. Seth knows only too well what will happen if he comes out as gay to his father, let alone introducing Evan as his fiancé! As for Seth’s mother, while she’s not the anti-gay extremist that Seth’s dad is, she’s unenlightened and in no way progressive. Seth is caught in a bind: If he fails to face up to his family, he cannot marry the man he loves and risks lose him altogether. Yet if he does come out to his family, he risks losing their love. Will Seth face up to his family and endure the consequences…or will he lose the love of Evan?