Natalie Acres writes exclusively for Siren Publishing with over 16 books to her name.


I’m excited to share information about the Cowboy Boots series in celebration of my new release. There are some great prizes to give away late tomorrow night – free downloads from my backlist and other nifty gifts. So be sure to leave a comment and your name will go in the bucket.


Make sure you check Natalie’s Facebook page. Winners will not be announced on this blog.

Now to pass it over to Natalie……
Cowboy Boots and Unsettled Debts, the third book in the romantic suspense saga, is by far the ‘hottest’ of the series. It introduces readers to Abby Rose and her team of seven fellow operatives. With a deadly mission in front of them, Abby’s team members are forced to face regrets as the come to terms with the fact they’ve fallen in love with one of their own. Now, with Abby taking an inside position on a very dangerous mission, Abby’s men work around the clock to make sure she leaves this assignment alive!


Hold on tight! This series moves faster than the hit TV show ‘24’ 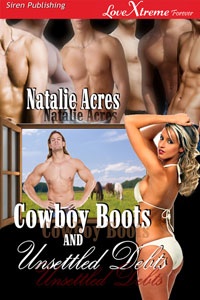 
Blurb:
Seduction turns deadly when Abby Rose, an agent with the Underground Unit, decides to put a provocative spin on revenge. Her plan to sleep with a cartel leader backfires when fellow operatives refuse Abby the opportunity to face her enemy alone.

[Ménage Amour: Erotic Cowboy Ménage Romance, F/M/M/M/M/M, BDSM, Multiple Partners, Suspense]
Sydney has a problem with Bitch. The horse her father treasures more than gold is running loose and a blizzard is headed for Southwest Virginia. After spending the entire morning chasing the darn animal, she discovers she’s probably not going to earn Cowgirl of the Year for her efforts.
So what’s a damsel in designer jeans to do? Call in reinforcements and fortunately, she knows where to find them.
The Donovan men are known for their good looks, alpha-male ways, and their skills behind stacks of hay bales. It’s their skills that often keep Sydney up late at night, only she’s just dreamed about them. She’s never had the opportunity to act on them because her father’s career often kept her on the move.
A blizzard strikes out and the Donovan brothers want to take the first step and make Sydney their own. Only first they’ll have to reveal a torrid past and answer some tough questions about their family and Sydney’s father. Soon, they discover their innocent little Sydney harbors several secrets of her own and from out of nowhere, a stranger rides in the storm with a surprise for the Donovan brothers.