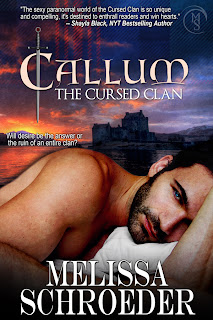 Here is the cover for the first book of my Cursed Clan series! It is a five book contemporary paranormal romance. This first one takes place in Scotland, a fair part of all of the books will be set there and have a connection with Scotland. Release date is Feb for digital. Here is the unedited blurb and excerpt:

As Laird, Callum Lennon feels he has always failed to protect his cousins. Callum’s impulsiveness caused the death of his father and the experience has scarred not only his body, but his soul. From that point on, he made sure to always go with the more logical choice in every matter. When his younger cousin Angus finds clues that might help break the curse, Callum begrudgingly hires Phoebe Chilton to investigate. Callum doesn’t like bringing outsiders into their family affairs. Their life would become fodder for the tabloids if anyone were to find out about the curse. It doesn’t help that the instant he meets Dr. Chilton he’s attracted. But, he doesn’t really have a choice because she might be their last hope.
An expert in archeology, Phoebe has always been dwarfed by her parents’ shadow. Their high standards had her in college by thirteen and earning a second PhD by twenty-two. But her career and her broken marriage have left her needing something more than just diplomas and degrees. She wants to prove that her interest in legends, especially Celtic legends, is as important as her parents’ work. When the Lennon family contacts her, she sees the opportunity to win a massive research grant. With a long-time rival breathing down her back, she jumps at the Blacks’ offer her, hoping it will ensure her the grant. But uncovering the Lennon family secrets, and her attraction to Callum, could prove more than she can handle.
Forces outside the family are determined to ensure that they fail. When an old enemy threatens both the well being of the clan and the fragile new love, Callum will have to choose between believing his mind or his heart.
~~~~~~~
“I protect what is mine. I’ll not allow you to use Angus.”
She moved away from the counter, her body tense with anger. “I have never used another person, especially in that way. You’ve convinced yourself that I decided to somehow use my considerable wiles on your cousin to somehow gain who knows what.”
When she said it like that, he felt juvenile and petty.
“Don’t worry, Mr. Lennon. I’ll avoid your cousins from now on.”
Which is what he wanted, but at the same time he felt like the lowest form of scum even if it was the best choice. The diary could hold their secrets, and the less she connected to them, the better. They just needed it translated, and for her to leave. As soon as that happened, he would be free of this affliction, he was sure.
“I’ll do my work and take my meals in my room.”
He heard the hurt in her voice. His need to banish Phoebe was as unexplainable as the need to ease her pain.
She attempted to brush past him, but he stepped in front of her, blocking her one exit. “I didn’t say you needed to avoid my cousins.” It was what he wanted, needed, but here he was contradicting his own thoughts, again.
When she looked at him, there was no humor in her gaze, no studied interest as he’d seen before. Now, all he saw was loneliness and he ached.
“No. I’ll finish my task and leave. I know you must have a very good reason, although I can’t understand what it could be. I will respect your wishes.”
Again, she tried to move past him, but he refused to budge. That same fresh scent of her reached his senses, seducing him.  Even as he was reaching for her, his mind was screaming stop. He ignored it, and every other protective instinct. The only thing roaring through his head was to take, to claim.
“It isna my family that has me worried, lass.” The moment he wrapped his hand around her upper arm, her head shot up, surprise lighting her eyes her mouth falling open in surprise. “It seems being around you is no’ good for my peace of mind.”
He jerked her against him. She gasped, the sound filled with both fear and excitement. Arousal spiked and his body craved—demanded—more intimate contact. Knowing it was wrong, even knowing it was dangerous, he bent his head and took possession of her luscious mouth.

2 Comments on “The Cursed Clan: Callum”