We are at the end of the Smutketeers day. I know, I am sad too! But, what a book to end with!
RG Around the Web 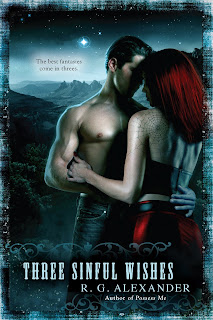 In Sinful Desires, magic is in the air when a mysterious stranger and one wild night of passion help Dani Harris admit her feelings for her longtime friend Liam, who has been in love with her for years.

Sinful Sensations follows the story of Bailey Wagner, who intends to stick to her five-year plan while she waits for Mr. Right. But when her sexy new boss convinces her to let loose with him–and a few of his friends–what begins as a kinky work break turns out to be a dream come true.

Fortune-teller by day and waitress by night, Kaya Honahni is too busy running from the expectations of her traditional Hopi family to search for romance, but in Sinful Pleasures, it finds her–times two. Despite her best efforts, Kaya can’t deny her attraction to Jace, or to his secretive best friend. And considering the way they respond to her, she won’t have to…

Excerpt
“This wasn’t exactly the welcome I was expecting.”
Great. Bailey banged her forehead on the edge of the attic door, feeling the rough wood scrape her head as she tried to see who stood beneath her. It wasn’t the voice of a seventy-year-old man.
With her luck it would be Ewan McGregor. After all, Dani’s wish had come true with a vengeance. Why shouldn’t hers? Though she’d wanted to be dressed better for the momentous occasion. “Excuse my manners. Welcome to the Enchanted Inn, would you mind helping me down?”
She heard a shout of surprised male laughter and wiggled her feet expectantly. But he didn’t come closer. “Hello?”
“I don’t know. You have to admit this isn’t an everyday situation.”
Bailey muttered beneath her breath. “For you maybe.”
“What was that?”
She raised her voice. “A gentleman wouldn’t hesitate like this.”
There was a smile of satisfaction in his voice. “Then you already know something about me. A gentleman also wouldn’t comment on your choice of underwear. Are superheroes a fetish of yours? Did you get yourself in this position because you thought you could fly? Are you hoarding any kryptonite I should know about?”
She wanted to make a smart-mouthed rejoinder, but she was busy staring something down. It had eight legs and pincers. It was the size of a small dog.
There was something familiar about this spider. The designs on its back, like a maze, its size . . . No. No it couldn’t be. There was no way this could be Dani’s disappearing spider, the one Kaya said was a sign. “I don’t think so, buddy.”
“Did you say something?”
The man may not have heard her, but the spider certainly did. It turned in her direction. She really didn’t like the look in its eyes. And then, without any warning, it charged.
She didn’t know spiders did that.
Now Bailey wasn’t one of those silly, helpless girls. She didn’t squeal or giggle. Sure she liked to shop and pink was her favorite color, but she also liked horror flicks, the more gore the better.
But what woman, or man for that matter, could stay calm and collected when a giant spider was making a kamikaze-like run at their face?
“Ack!”
Bailey lifted her arms to protect herself and fell. She braced her- self for the hard floor, but strong arms caught her before she hit, knocking the breath out of her lungs.
“Oomph. I gotcha.”
She looked up into quite possibly the handsomest face she’d ever seen in her life—sorry, Ewan—and frowned. “Damn spider.”
If that was Kaya’s Spider Grandmother, she wanted to have a private word. Now? Now with bits of dust and possibly insulation in her hair? This is when last month’s cover of GQ shows up to play white knight?
“Does management always hang around half naked at this inn? If so, I think you’re missing a key marketing demographic by not advertising it as a perk.”
“Then the white knight opened his mouth, forcing the princess to beat him senseless, and she lived happily ever after without him. The end.” Bailey sighed in mock disappointment, trying to wriggle out of his arms with a tiny amount of grace intact.
GQ just grinned, as if enjoying her irritation. “Aren’t you at least going to thank me for saving you before you insult me?”
She raised one eyebrow. “Oh, I think you’ve been thanked enough. Or is that someone else’s hand squeezing my ass?”
~~~~~~
RG is giving away a 10 dollar GC to amazon!
Here is her question: