Please welcome Shayla Black to the Addicted to Harmless Blog Party. She’s our last author of the day. She is giving the reader a choice of anything in print in backlist signed.
Shayla around the web:

Surrender to Me
AMAZON
BARNES AND NOBLE
BORDERS 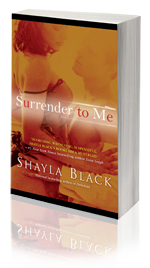 A ménage a trois becomes a dangerous obsession.

A Navy SEAL accepts a hot proposition: share a buddy’s girlfriend and fulfill her dream of a ménage. But after meeting Kata he needs more than one night. And he wants her all to himself-a guilty secret that becomes a dangerous fantasy.

A secret fantasy.
Hunter had everything until a bullet put his career as a Navy SEAL on hold. Restless and in need of distraction, he accepts an intriguing proposition. Restless and uncertain about his future, he accepts an intriguing proposition: share an acquaintance’s girlfriend and fulfill her fantasy of a ménage. It should have been just a night of sexual adventure between three consenting adults. But Kata is like no other girl Hunter has ever met. By turns audacious and sexy, then vulnerable and aloof, she’s a heartbreaker he’s determined to master. But he needs more than one night. And he wants to do it alone.
An uncontrollable obsession.
Kata never expected to leave her comfortable relationship and explore something so dangerously forbidden with a stranger. Hard as she tries to resist, the guilty pleasure overwhelms her, and she surrenders herself, inch by inch, to the hardcore man who wants her for himself. Consumed by blazing desire, they’re soon threatened by the shadows of the past. And now to keep Kata safe, Hunter makes her a bold proposition of his own. Saying yes will destroy her heart. But saying no could cost Kata her life.
SURRENDER TO ME has debuted on the New York Times trade fiction bestseller list, the Neilsen Bookscan romance bestseller list, the Barnes & Noble trade fiction list, the Borders romance trade bestseller list and topped the Barnes & Noble trade romance bestseller list.
Excerpt
The first thing Hunter Edgington thought when he saw the laughing brunette across the crowded hotel suite, champagne in hand, was that he couldn’t wait to fuck her.
His next thought was that it was a damn shame the curvaceous bombshell belonged to former boot camp buddy, Ben.
“Does she know?”
Ben leaned against the wall and took the last swig of beer from his bottle, then yelled over the deafening party tunes. “Nope. Big surprise. She wanted to come to Vegas for her birthday and have her fantasy fulfilled. After the shit she’s been through lately, when she requested…” He let loose a beer belch, tossing his brown hair from his unfocused eyes. “I delivered.”
Maybe, but Hunter suspected Ben hadn’t spilled the whole story. He’d spent the last half-dozen years as a Navy SEAL and was still alive because he listened to his gut. “You’re okay with this?”
“Yeah!” Ben slurred. “Fuck, she’s hot in bed. Passionate. All that Latina blood.” He leaned in and grinned. “She’s a screamer and scratcher.”
Ben’s words created a visual that had Hunter stone hard: himself with her, naked, slick with sweat. Her fuck-me mouth gasping his name. Her red manicured nails digging into his shoulders as he nuzzled her lush breasts. While pounding her swollen pussy relentlessly deep with his cock.
He wanted that—and would do whatever necessary to make it happen.
As if the sensing his stare, the gorgeous woman looked up. Their stares locked. Oh, yeah. She exuded sex appeal with all the subtlety of a flashing red light.
Instinct jabbed his gut with a full-throttle attraction that raced through his veins. Yes, she was beautiful. Tangling his hands in her dark silk hair as he claimed her mouth and body—all while cuffing her helplessly to his bed—would be fucking incredible. Even twenty feet apart, they generated combustible heat that singed him down to his balls. It was beyond chemistry. At thirty-two, Hunter knew the difference. He didn’t merely want her; he wanted to unravel her, figure her out, possess her completely.
Hazel, mossy green laced with deep brown. Stunning against her hint-of-olive complexion. Another shock of awareness blasted through him. The wide smile fell slowly from her lips. She held his stare, drew in a trembling breath. Her pulse fluttered at her neck. Her little pink tongue peeked out, swiping across her lips to lick them.
She felt the heat between them. Good. Because this goddamn searing lust made him wonder if he could ever sate his hunger for her, much less in a single night.
“What’s her name?” He had to know, ached to.
“Kata.” Ben slurred. “Short for Katalina, but she hates it. I call her that when she pisses me off, but then she calls me Benjamin and—”
“Got it.” Hunter didn’t need to know the ins and outs of Ben and Kata’s relationship. He already envied the bastard like mad. “Boundaries?”
“Nah, man. Whatever she wants.”
Idly, Hunter wondered if Ben realized that, without limits, he could be really fucking lethal. Requesting leave from his team after being shot, Hunter had nothing more to do for a week than rehab his shoulder and devote himself to seducing Kata.
And why warn the competition? Hunter suspected he’d lose a buddy over this girl. Poaching wasn’t his style, but for her, he’d bend the rules because Hunter would be more than happy to be the man scratching Kata’s itch from now on.
~~~~~
So, to get your chance at that book, answer this question:
If you had to be trapped on a desert island with ONE Shayla Black character-who would you chose and why?