Everyone, please welcome Leah Braemel to the blog! She is giving away a digital copy of Texas Tangle which inspired Tangled Past. Check out all her places around the web! 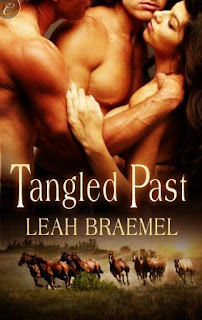 Forced to marry a man she just met, Sarah McLeod clings to the hope that she’ll finally find the love and acceptance she’s always craved. But her tenuous dreams of a happy life on the frontier are in danger of being dashed by the one thing she can’t change—her husband’s love for another man.
Jackson Kellar’s determined to do right by his bride, yet. He’s torn between his newfound love for Sarah and his still-burning desire for Nate.
Ranch owner Nate Campbell loves them both. He hates to see Jackson’s loyalties so divided, and doesn’t want Sarah hurt either. But how can they fix the tangled mess they find themselves in? Nate suggests a possible solution – a permanent threesome.
With the open frontier closing in around them, is Nate’s solution their path to happiness? Or will others destroy what they’ve found together?


~~~~~~
So, you want that digital copy of Texas Tangle??? Well, to get a chance, answer this question:
Have you ever read a book (or seen a movie) that mentioned a past event that you wondered about and wished had been turned into its own story?