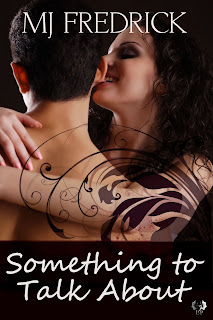 SOMETHING TO TALK ABOUT

Taking chances is never easy–especially when the whole town is watching.
Ellie Morgan is trying to stay below the radar in a small town. Her break-up with her football coach boyfriend and growing interest in her best friend’s
widower are grist to the local gossip mill. Her friendship with the local psychic and the return of her prodigal mother are the cherries on the cake.
Add a meddling preacher, a water-loving dog and a man trying to shake off his past, and Ellie’s got more than enough on her plate in her quest for
love.

A ripple of sound ran through the diner and attention turned toward the door. Beside him,
Matt murmured a warning. Slowly, Noah turned to see Trey–dressed in exercise gear–hit the stoop in a long-legged stride, brow furrowed, chin lowered.
Pissed.
Noah went on alert as Trey slammed the glass door open. Mel stopped it from hitting the wall and the room silenced once again. Trey scanned the room, focused on Noah, then swiveled to see Ellie, frozen with a coffee pot in her hand, her expression stricken.
“Trey.” She took a step forward, but he turned to Noah.
“You.” He pointed. “Outside.”
“Trey, no!” Ellie set the pot down hard and hissed when hot liquid sloshed over the side
onto her hand.
Noah leaned back in his chair with deceptive calm. “You don’t have a fight with me, Trey.”
Trey’s color darkened. “You don’t think so? She leaves me and three days later you’re on
the beach with her? You’re driving her car? How long have you been after her, man, or have you been with her all this time?”
Ellie was at Trey’s side now, her hand on his arm. Noah was unprepared for the stab of jealousy, seeing her long fingers on his bare skin, knowing Trey had known that touch everywhere. Trey barely acknowledged her as he tilted his head slightly in her direction to include her, but not taking his focus from Noah.
“I’m not poaching on your territory,” Noah repeated, but something in his face must have
betrayed his emotion because Trey leaned closer. Matt rose, but Noah stayed put.
“Coach,” Matt soothed.
“Outside,” Trey said through his teeth.
Noah pushed his chair back and stood slowly.
“Noah!” Ellie circled behind Trey and put a hand on Noah’s chest. He looked down at her hand, then at her face, turned up to him, her jaw tight, blue eyes dark with warning. All he could think about was how close she was, how good she smelled, how much he wanted to fold his arms around her.
Too late, he registered Trey’s fist swinging. He could have ducked, but that would have put Ellie in the line of fire, so he took the fist to the cheek, felt his skin split, his teeth loosen, and he stumbled into the table. Through the ringing in his ear, he heard people shouting.
And felt Ellie’s hands on the front of his shirt. She turned and said something sharp and angry to Trey. Noah regained his footing. The bell over the door rattled, then Trey was gone and Ellie’s fingers were on Noah’s cheek. He winced and ducked before he realized what he was doing.
“God, Noah, I’m sorry,” she murmured. “Are you okay?”
His hands cupped her elbows before he realized everyone was staring, and they would interpret the move as intimate. He backed away and ran his tongue over his teeth. All intact, but sore as hell. “Yeah. I’m okay.”
“I need to go talk to him.”
Why did the words hurt? He looked away. “Yeah, all right.”
She turned and left the diner. Slowly, he circled to see Mel and Matt setting the table to rights, then Mel crouched to pick up shards of broken coffee cups and plates. “Way to go.” She cast a dark look in his direction.

Up for grabs a ten dollar GC to the online bookstore of your choice. Let MJ know, what draws you to stories set in small towns?