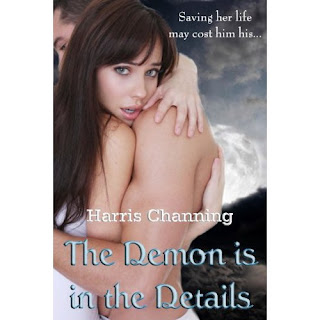 Extend a big old Harmless welcome to Harris Channing! She has a free download of her book The Demon is in the Details.
Check out Harris around the web:
WEBSITE
BLOG
TWITTER
FACEBOOK
MYSPACE
LINKED IN
The Demon is in the Details
AMAZON
BARNES AND NOBLE
Stella Campbell has come back to Silverton, Georgia to bury her wicked witch of an aunt. But is she strong enough to endure what’s to come?

Zane Weathers has been around a long time, like, two thousand years. But he’s never met anyone who touches his warrior soul, like Stella.

Together they must face not only personal obstacles, but obstacles straight from hell!

Excerpt:
Zane stood firm for a moment and looked at Stella. The soft yellow rays from the porch light cast her in an ethereal glow. Stella Campbell sure was pretty with her wild dark auburn locks and gorgeous green eyes. Still, the sorrow that lurked in those jade orbs touched him. God, he hoped he could help her.
When their gazes met, there was no denying the pop of electricity between them and despite the pleasant warmth that spread across his body and reminded him he was a man, he knew better than to make her more than just a client. He reined in his physical reaction and took a step back, ready to escape. “Seven a.m. too early?”
The question went unanswered at the sound of spinning gravel and the beams from a set of headlights cut through the canopy of darkness. He turned. A police car pulled to a stop beside his pick-up. Zane slid Stella a glance. Her face had gone white; even her soft, pouty mouth seemed to blanch. This time when he reached out and placed what he hoped was a reassuring hand on the small of her back, she didn’t pull away from the contact. In fact, she leaned
into him and damn it, he liked it.
His heart kicked up a notch and a protective heat encased him. Yep, there was no denying it. He was here for her and judging by the way she shook at the officer’s approach, she was more of a wreck than he imagined.
A portly cop rounded the car. His large belly hung over his gun belt, hiding the buckle from all except those with supernatural, x-ray vision.
“Evenin'” the officer said, his pudgy face tinged red with the effort it took to climb the stairs. Silverton’s finest certainly needed to lay off the Moon Pies and R.C. Colas.
“Evening,” Zane said, sliding his arm around Stella’s waist, savoring the feel of the trim arc beneath his hand.
“Officer Lankford,” Stella said, her voice quaking. “What can I do for you?”
Lankford ran stubby fingers through his graying hair. “Sorry about Ms. Lou,” he said eyeing the house.
“Thank you,” she managed and looked away. Was that shame he sensed? Silence echoed through the still evening air.
“Is there a problem?” Zane asked, hoping to ease the tension that racked her soft, curvy body. Damn it, he needed to stop.
“Not really,” Lankford remarked shifting his weight on stout legs. “There’s just been a rash of-” He looked over his shoulder as if he feared the shadows in the nearby woods listened to his every word. “…a rash of animal sacrifices.”
At Stella’s sharp intake of breath, Zane glanced her way. If possible her face grew paler, her skin almost transparent. “A-Animal sacrifices?” Her voice was weak and her fear apparent by the trembling of her delicate jaw.
“Yes. I wanted to advise you that what with the solstice and all coming up, you know them silly kids pretending to be pagans and devil worshippers…well, you might want to keep your eyes peeled.”
She nodded. “Are they happening here? On Lou’s property?”
“Nope, but real close.” He pointed south. “Over by Paulson’s farm.”
“Oh, that is close,” she whispered.
“What sort of sacrifice? Cat, dog?” Zane asked. He glanced at Stella and saw by her expression she thought he was a freakin’ ghoul. The truth was you could tell a lot about a devil worshipper by the animal he chose. God, he hoped Lankford didn’t say goat.
“Some chickens, a cow, but mostly goats.”
“Damn,” Zane mumbled.
“Those poor animals,” Stella said, her hand coming to rest on her chest.
Lankford nodded. “Well, just wanted to give you a heads up. Call dispatch if you see anything at all strange, all right? And Ms. Campbell, try not to get into any trouble.”
“Oh, yeah. Okay,” she replied but her words sounded weak, her breathing heavy. The warning apparently lost on her as she stared past the fat cop and toward the direction of Paulson’s farm.
“Good.” The officer tilted his head toward them and ambled off leaving Zane to wonder just what sort of evil had brought him to this place.