Review Copies of The Spy Who Loved Her available - Melissa Schroeder

Hey, everyone. I have the ARCs of The Spy Who Loved Her, a historical in my Once Upon an Accident series. Now, you have to have do one of the following:

Review for a site (Joyfully Reviewed, FAR, etc)
Have a personal blog where you post reviews
Post reviews on Amazon, B and N, goodreads, etc.

Here is the info:
The Spy Who Loved Her (Book 3, Once Upon an Accident)
March 8th
62000 words, historical romantic suspense 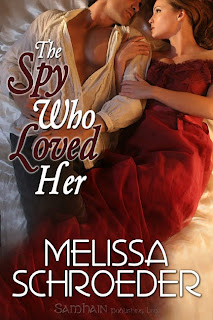 To keep her safe, he will not only have to risk his life, but also his heart.
Once Upon an Accident, Book 3
Lady Anna was once considered the catch of the season. Now, three years after she fell for a man who tried to murder her cousin, she eases her guilt with charity work at an orphanage. Until her mother insists she do her duty.
Attending her cousin’s ball is irritating enough. It’s her one dance with Daniel, the unscrupulous Earl of Bridgerton, that rubs her nerves raw. And oddly leaves her senses on the edge of arousal.
The ton sees Daniel as a scoundrel. In truth, like centuries of Bridgertons before him, he leads a vast network of spies, protecting England from her worst enemies. His resolve never to marry means the one woman he’s always wanted—Lady Anna—is off limits. Especially now that his father’s murderer is coming after him as well.
At first, Anna wonders if Daniel was put on this earth just to annoy her. It’s only when she finds him injured that his mask begins to fall away—and so do the barriers between them. But their flaring passion puts her right where Daniel didn’t want her. Next on a killer’s list.

This book contains spies, musicales, men who think they know everything, women who know they do not, naughty liaisons, matchmaking mamas, and a seduction that will curl your toes.

~~~~~~~~~
This is NOT for regular readers. I will be doing a contest closer to the release for that.  I have a very limited amount of review copies available so this offer won’t be around long.
If you are interested, EMAIL ME, and tell me the following:
Your Name
Your Blog Name, Review site you work for, and/or if you post on the larger sites.
What format you need(PDF, PRC, PDF Sony, HTML, RB, LIT, IMP)
When you think you can have the review done by.
Thanks,
Mel

Tags: reviews • The Spy Who Loved Her • ARCs