Teaser Tuesday: Faking it with my Frenemy - Melissa Schroeder

Teaser Tuesday: Faking it with my Frenemy 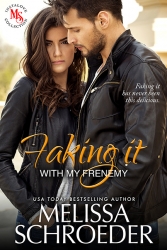 Just a couple more days and the last Faking It book will be here.

I just posted the first chapter on the book page or you can check it out below.

It’s lunchtime, and I’m ready to kill someone. Just anyone will do. I don’t care if I know them, but if I don’t let go of some of this tension, there’s a good chance that I’ll explode. You know, like the guy at the beginning of that Monty Python movie where the guy just keeps eating, only my source is stress instead of gorging myself on food.  Also, I forgot breakfast and now it looks like I’m not going to get lunch.

“I need you to explain it to me like I’m five years old.”

Our pastry chef gulps, and I feel a little guilty. I’m not irritated with her. Nancy has been working here for years, and she’s brilliant. About a decade older than me, she’s plump, with fair hair, pretty blue eyes, and usually with a sweet smile. Today, it is nowhere to be found. The BFH running roughshod over my staff is to blame.

“She said that she wanted to know just how big Milo’s cake was and then insisted I double hers. I don’t have time to do that and, let’s be honest, going off the numbers, that will mean a lot of left-over cake.”

I close my eyes and count down from ten. I have a horrible temper that I learned to control. I rarely lose it at work. Family, I let it loose, but work, I keep it under wraps. For the first time, I am dangerously close to losing it.

I open my eyes and see Nancy staring at me like I’ve lost my mind.

“Give me a few minutes with her, and she’ll decide not to be such a monster.”

“No. Your job is to create the most delicious baked goods.” And she does. My ass can attest to that. I’ve gained ten pounds since I was hired as the food and beverage manager.

“Maybe cool off before talking to her. They’re having a wedding shower now.”

Yeah, I forgot about how she backed us into a corner on that one. She had the invitations sent out for the shower before making sure it was okay to book a room during the monthly Garden Club meeting.

Nancy looks around, then leans closer. “She thought she would bag Milo or his best friend. As it is, this GFH is kind of a skank. I guess they fit.” She shrugs.

I don’t tend to gossip with the staff. It’s not good form, but this skank gets no respect from me.

“Yeah, I’ve dealt with him. He’s not someone I would marry.”

The first meeting I had with him, he came on to me. His bride-to-be was in the room next to us, and he was asking if I lived on the property. Oh, and did I like the idea of nooners. I played dumb, then went to my apartment and took a very long shower. I felt so dirty. From that moment, I have made sure that all the female staff that had to deal with him have other people around.

When I took on Rachel Burton, I knew the wedding would be a problem, but being the youngest of five Marine BRATs, I enjoyed a good challenge. And that’s what I thought this would be. A good challenge.

I was wrong. Burton lives to make people miserable. I know my mother would tell me to look at the world from her point of view and figure out why she is the way she is. Mom is a helper. Perfect military wife.

I always wanted to be one of the boys, and I just want to punch her right in the fake nose she has. I’ve seen her elementary school pics. It is most definitely not the nose she was born with.

“This is her just being petty?”

I scrub a hand over my face, not caring if it screws up my makeup.

“I’ll deal with her. And don’t take her calls from now on. I’m going to talk to Beatrice about this. She should have taken care of it, to begin with.”

Our wedding planner is usually better at handling things like this, so I’m surprised it even got this far.  I don’t blame her. Dealing with Rachel Burton isn’t something I would wish on my worst enemy.

“Sure thing, Allegra. I’ll be happy when this weekend is done.”

I smile at her and send her on her way. I draw in a few deep breaths, trying to calm my irritation, then grab my phone and head off to find Beatrice. I’ve gotta find out just what the Bridezilla from the outer reaches of hell has been doing behind my back.

I step out of my office and run right into Milo Darling. He’s the CEO of Darling resorts and brother to my nemesis, aka the head chef, Theo Darling.

He’s a tall man, just like his brother, with an easy smile, but unlike my temperamental chef, he’s sweet. The way he dotes on his wife makes my heart sigh.

“I told you to call me Milo and don’t ever apologize for doing your job.

He’s only told me about a hundred times, but I know he took a chance on me. I just turned twenty-five, and I’m running the food and beverage department.

“Is there something I should know about?”

My phone buzzes again, and I ignore it. My brothers are notorious for long group text messages. And with one of them coming here this weekend, it will only get worse. Not even in the mood to deal with Raine.

“Just the normal stuff. And the big wedding this weekend.”

He rolls his eyes. “I wish I had known that woman wanted to book here. If I had, I would have made sure that she didn’t get a spot. I’m very sorry about whatever she is doing.”

I offer him a bright smile. “I can handle her.”

“I have no doubt, but you don’t have to. I don’t mind if you kick her ass to the curb.”

“No worries. Was there something you needed from me?”

“I wanted to check in with you about Theo.”

Ugh, why me? So, maybe you don’t know Theo Darling, but the man lives up to his name. He’s sex on a stick, a man who knows his way around a woman’s body, and he has these sleepy eyes…GAWD. To top it off, he’s a master chef, a man who can create amazing things out of food, and he does it with very large hands. Even a virgin like me knows what that means.

Of course, that all ends when he opens his stupid mouth. He’s arrogant and autocratic, which might make him a good chef, but he makes my job more difficult. The fact that I would like to climb him and take a ride—that is just an annoyance.

“Did he complain about me again?”

He rolls his eyes and smiles at me. “Not that much.”

I laugh, but it’s because I know that’s a lie.  I know for a fact Theo called Milo while he was on his honeymoon a couple of months ago. Just to complain about me.

“I just want you to understand—”

“He’s a genius and temperamental. I get it. I’ve dealt with chefs before, and all the good ones act like him.”

He nods. “Either way, I wanted to make sure he hasn’t stepped over the line. You will come to me if he takes his complaints too far.”

“I grew up with four brothers who all became Marines—not to mention the Marine father who inspected our rooms weekly.” When he was home. There were a lot of times he wasn’t home.

“Even so. I won’t put up with that crap from anyone, especially not my brother.”

“You got it, boss. Is there anything else you need?”

“Then I am off to talk to Bea about the BFH.”

My face flushes at the acronym I give the brides who give me hell.

He barks out a laugh. “That fits her.”

“Family and I’m ignoring them. They’re being annoying. Anything else?”

“You know, you do get vacation time.”

“And I plan on using it in three months, promise. One thing military families learn is to take time out every now and then. My family has plans for a two-week vacation.”

“I gotta get going and deal with the newest issue unless there was something else.”

He shakes his head, and I hurry off to hunt Bea down.

I’ll worry about lunch when I get a break, probably around seven tonight.