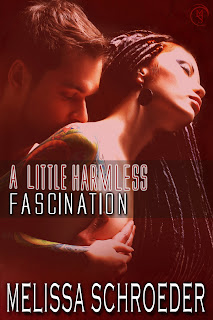 The time has arrived! This is going to start the roll out of THREE Harmless books within the next two months! I really loved this story. I love all of them, but since Jillian decides to treat Conner as a tourist, I get to take the readers to a few of my favorite places, just like I did with Brandy this January. But it is finally here! Make sure to check back throughout the day and I should be adding links as they load up.
A LITTLE HARMLESS FASCINATION
AMAZON    BARNES AND NOBLE
ARe               SMASHWORDS
Wanting her isn’t smart, seducing her is inevitable, but falling in love with her could be downright deadly for both of them.
A Little Harmless Fascination
Harmless Book 7
Security expert Conner Dillon isn’t a man who often takes a vacation. So when he is ordered to take a month off, and his sister insists on a trip to Hawaii, he isn’t very happy. But, after seeing his landlady Jillian Sawyer again, he might just find something—or someone—to occupy his time.
For years, Jillian has always had a crush on Conner. Now an erotic romance author with a thing for Doms, she finds herself beyond intrigued by the man. He is good to the core, but there is something else darker in him that calls to her.
After one night in bed, they both find themselves addicted. In Jillian, Conner has found the perfect sub…and in him she finds someone she can trust.  Falling in love isn’t what they expected, but walking away is impossible—especially when they realize someone wants Jillian dead.
WARNING this book contains the following: An uptight security expert who prefers schedules, a romance writer who does not, tattoos, a trip to the Aloha Swap Meet, two hunky neighbors who irritate our hero, and of course this would not be a Harmless book without a trip to Rough ‘n Ready.  Ice is recommended as any Harmless Addict will tell you, but the author takes no responsibility if a reader should become overheated. Read at your own risk.
BONUS MATERIAL:Includes the entire first chapter of Melissa’s upcoming historical vampire release By Blood: Desire. ALSO: EXCERPTS from LEXI BLAKE and KRIS COOK.
A Little Harmless Fascination is an Interracial erotic romance with BDSM elements and light suspense. It is the seventh book of the series that can be read alone. It is 63,000 words and include 11,000 word excerpt of Desire.
EXCERPT:
“How about a tattoo?” she asked, pulling him out of his thoughts.
He choked on the drink of coffee he’d just taken. The warm liquid shot up his nose, and he winced. She handed him a napkin.
“What?” he asked.
She smiled and nodded to a tent on the other side of him.
“It’s just henna. Don’t look scared.”
“I’m not scared. I’m just not into tattoos on me.”
She pulled her glasses down on her nose so she could look over the top of them. “What about on other people?”
He could tell from the sparkle in her eyes that she was fucking with him. He looked down her arms at a sleeve of tattoos that must have taken hours to get. “Depends on the person. I especially like yours.”
“Really?”
“Yeah. That and your belly button ring.”
Her lips curved as she pushed the glasses back up and turned to walk away. The woman moved like a freaking temptress. He knew it was innate to her, like breathing. She didn’t do it on purpose. That didn’t mean he could ignore it. His hands itched to touch, to tease, to spank. That full ass swinging in her barely-there shorts…he was sure the lack of blood in his brain wasn’t good for his health.
He caught up to her. “So, is your belly the only place you’re pierced?”
“Wouldn’t you like to know?”
He slipped his hand around her upper arm and gently tugged her to the side of a tent at the end of one of the rows, out of the pedestrian traffic. It was heating up, the air stifled by the arrangements of the vendors, and the humidity was rising by the minute. The scent of her filled his senses.
“Yeah, I kind of do want to know where else you’re pierced.”
She smiled up at him, and he could tell she was going to brush him off. The Dom in him was already beating his way out. He had lain dormant for months, but with Jillian around, those dominant tendencies were surfacing again.
She patted his cheek. “I only share that with intimate friends.”
Jillian turned to leave, but he grabbed her arm again.
“Don’t mess with me, Jillian. I don’t like it, not that way.”
Her eyes narrowed as she looked down at his hand on her upper arm.
“If you’re not interested, just say ‘leave me the fuck alone, Conner.’”
He waited, holding his breath. He hadn’t meant to challenge her, hadn’t known this was so important right now. It was. More than he had ever expected, it was beyond that now. Why this woman, right now, he had no idea. But the need he had building in him was starting to take over any sane thought he had. He knew right now if he didn’t have her soon, there was a good chance he might just go a little insane. If she said to fuck off, he would be screwed.
When she didn’t say anything, Conner let loose the breath and nodded. “Good, then we understand each other. Just know that when I ask you that question again, I will expect an answer.”